Behind the Scenes at BOW

By Patti Harper and Riley Woodford 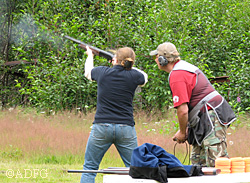 BOW instructor and organizer Kirk Lingofelt works with a student learning to use a shotgun. Photo by Patti Harper.

An erupting volcano, an extreme low tide, a missing boat and a cooler of fish that went for a joy ride were just a few of the last-minute snafus that challenged organizers of Alaska’s most recent Becoming an Outdoors-Woman weekend.

Women were certainly ready to see the Becoming an Outdoors-Woman workshop (BOW) come to Southeast Alaska. The weekend event drew 60 women, with 70 more on a waiting list. The workshop was held at the Rainbow Glacier camp in Haines Aug. 1–3, with most of the participants traveling from Juneau. Participants attended four half-day outdoor skill workshops, choosing from 22 different fishing, hunting, and outdoor skill classes.

“One of the things that stands out is how well organized the whole thing was,” said Debbie Senn, who took a fishing class. Jill Matheson, who took the shotgun class, said she appreciated how everything was set up so that all participants had to do was to show up and learn.

Pulling all of this off wasn’t as easy as it might have looked to participants. “It takes a lot of prep, good communication and teamwork with folks that know how to roll with various logistical logjams and make things work out for the better,” said regional BOW coordinator Nancy Long, an information officer with the Alaska Department of Fish and Game (ADF&G).

Drawing on the experience of veteran BOW organizers in the department from Anchorage and Fairbanks, Long and two other ADF&G coordinators worked for a year with a number of community volunteers to get everything organized. Together, they managed the mountainous logistics of finding funding, getting instructors, registering participants and transporting equipment and people to the camp.

Anne Post coordinated instructors and Debbie Spencer served as the point person for registrations. Long, Post and Spencer flew to Fairbanks last summer for coordinator training, and attended at least one weekend workshop as participants. Spencer went to Chickaloon in Southcentral Alaska for the winter BOW workshop. She said the advice and assistance of Tracy Smith, Cathie Harms, Nancy Sisinyak and Kirk Lingofelt, who have collectively organized more than a two dozen past workshops, was invaluable.

Lingofelt drove a 42-foot trailer stuffed with gear from Anchorage to Tok, where he rendezvoused with the Fairbanks staff, which also included Laurie Boeck and Kelly Mansfield. The tons of equipment included 30 Dutch ovens, 12 tables, 12 large “classroom” tents, seven guns, a four-wheeler, a dozen compound bows and hundreds of arrows, ammunition, 1,000 clay pigeons and throwers, life-size animal targets, tree stands, chain saws and thousands of dollars worth of BOW attire.

A boatload of gear came from Juneau as well; dozens of fishing rods and reels, canopies, kayaks, more guns and totes filled with fishing tackle. It took seven people two full days to unload the equipment and set up the camp.

Then they scrambled through the scree of some last-minute Alaska-style kinks. Take the little matter of the two deer for the field dressing class. They were to be hunted on a mountain top near Juneau, frozen whole, transported by ferry to Haines, and then thawed just in time for the class. Bad weather kept the hunters from shooting and freezing the deer until two days before the workshop. 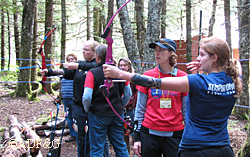 About that time Hoag received a text message from the woman who was to co-instruct the backpacking course. A volcano had erupted near where she was working in the Aleutian Islands and her flight was cancelled. She wouldn’t be making it to Haines.

Hoag found the silver lining. “Logistically, it kind of helped,” Hoag said. She already had the instructor’s gear, and a participant was able to use the absent teacher’s bag.

Like other volunteer instructors, Hoag’s payment came in the form of participant smiles and pride rather than in cash. Her effort involved hours preparation as well as teaching the class. “It was a really good group of people,” she said of her class. “They were really different in age and fitness and experience level – everybody just worked really well together and it worked out great.”

It’s one thing to teach without your co-instructor. It’s another to try to teach a skiff-handling class or a salmon trolling class without a boat. Boats had been arranged months beforehand. But, on the day of the class, it turned out that one boat wasn’t available and the other wasn’t working.

“Luckily, I had some personal resources there so that came in handy,” said Jason Shull, a fisheries biologist with the Division of Sport Fish who taught the salmon trolling class. Shull grew up in Haines. He made some calls to friends who loaned him their skiff, and got it in the water just in time for the first class.

An extreme minus tide added a kink to the skiff-handling class. The low tide left the boat ramp high and dry, and participants on the morning class couldn’t practice launching the skiff. Instructors realized the night before that they would need to launch the skiff at 4 a.m. just to get it in the water. Trailer-backing and handling practice was shifted to a later time.

Organizers said there were many behind-the-scenes helping hands that went into making the weekend not only successful, but special for participants. Michele Elfers, a volunteer organizer and fly fishing instructor, said volunteers from the Juneau Trout Unlimited chapter spent perhaps 20 hours hand tying about 80 flies – Humpy Hookers, Clouser Minnows, and others – that were given as gifts to the women in the fly fishing class to help them continue with the activity on their own. “The women were really touched,” Elfers said.

Participants paid $250 and $70 for round-trip transportation (via catamaran from Juneau to Haines) to attend, but that didn’t come close to covering the total cost. The sale of BOW attire – shirts, jackets, tote bags and accessories rivaling merchandise at a Rolling Stones concert – contributes to covering the expenses. Even more significant are the cash contributions, equipment loans, and auction and raffle items donated by area businesses. “We could not have done it without the wonderful and generous community support,” said Long. 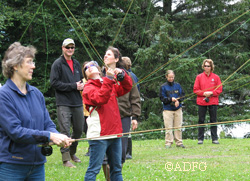 Students in the flyfishing class learn to cast under the watchful eyes of instructors Brad and Michelle Elfers. Photo by Patti Harper.

Lingofelt said the department’s partnership with the Outdoor Heritage Foundation is key to making this all happen. A nonprofit dedicated to promoting outdoor recreation such as hunting and shooting sports, the foundation helps with organizational and financial logistics.

Organizers are working to regularly offer the BOW workshop in Southeast Alaska, and hope this first successful weekend will help draw even more community support for the effort.

With the amount of logistics and people involved, there will no doubt be some last-minute challenges next time too. That’s part of the process and part of the fun, Long said. “You have to be ready to juggle, trust the folks you are working with, and have a good sense of humor,” she said. “Participants, instructors, and staff worked well together. We provided a safe, fun, memorable weekend of hands on learning. And that’s what Becoming an Outdoors-Woman is all about.”

Becoming an Outdoors-Woman workshops in Alaska are provided through a cooperative effort between the Outdoor Heritage Foundation of Alaska and the Alaska Department of Fish and Game.

Patti Harper is a writer and editor with the Alaska Department of Fish and Game’s Division of Wildlife Conservation.

National sponsors which have donated equipment and resources to BOW