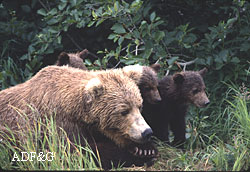 What do garbage, shorts and bears have in common?

Nothing really, except those were the words poets were challenged to use when writing haikus for the recent “Bear Aware Trash Talk Poetry Challenge.”

The poetry contest, which drew about 30 entries, was judged by Fish and Game Anchorage area biologist Rick Sinnott. Sinnott happens to enjoy writing humorous wildlife haikus and has won prizes for his submissions to the Anchorage Press, the city’s alternative weekly newspaper.

Haikus, which are short unrhymed Japanese poems, must contain five syllables in the first line, seven in the second and five again on the third. They often reflect on some aspect of nature. In this contest, poems with messages about keeping bears out of garbage were ranked especially high, as were those that had double meanings, Sinnott said.

The movie night -- sponsored by Safe Neighborhoods, Wild Bears – was meant to be a fun way to draw attention to a public education effort aimed at reducing human-bear conflicts by encouraging the use of bear-resistant containers in Anchorage.

The movie night featured a short skit about keeping bears out of garbage which was written and acted by the Alaska Theatre of Youth plus two short films about bears and managing urban wildlife. As an added surprise, a member of the audience, Ladonna Lindley, sang a bear-aware ditty she has written to the tune of Gloria Gaynor’s “I Will Survive.”

Thanks to funding provided by BP Exploration (Alaska) Inc, Alaska Waste, the Municipality of Anchorage – Salmon in the City program and the Alaska Chapter of the Wildlife Society, Safe Neighborhoods, Wild Bears this summer is offering a free upgrade to bear-resistant garbage containers for 500 Alaska Waste customers in Northeast Muldoon and Stuckagain Heights. Both neighborhoods have a lot of bears, and a history of bears getting into trash. Educational programs, including the movie night and the poetry contest, are also part of the campaign. 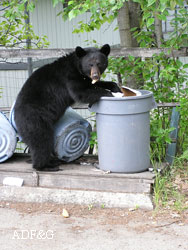 Cooperators in the project include the Alaska Department of Fish and Game, the Anchorage Bear Committee, Alaska Waste, the Alaska Center for the Environment, the Municipality of Anchorage, Defenders of Wildlife and Audubon Alaska.

“Eat my shorts!” I cried
Backing into the garbage,
Afraid of the bears

Title: Divorcing Him of His Clothes

If there’s garbage here
Unfit even for the bears
It’s his yellow shorts.