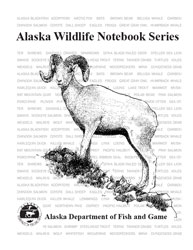 Alaska is home to singing seals, shrimp that change their sex, polygamous phalaropes and air-breathing fish. These odd creatures – as well as all the familiar Alaska animals – are included in the new Alaska Wildlife Notebook Series.

The Wildlife Notebook Series has long been one of the Alaska Department of Fish and Game’s most popular publications. This winter, the book was updated, revised and reprinted, and the new edition features about 20 new species. The 300 page book includes about 150 birds, mammals, fish, amphibians and reptiles (yes, there are reptiles in Alaska – sea turtles). In general, each chapter in the book highlights a different species, although in some cases a group of animals such as shrimp, woodpeckers or sparrows are combined. Crisp black and white illustrations are featured for every animal. 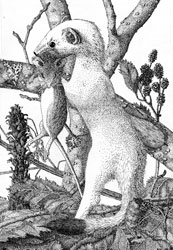 An illustration by Juneau naturalist and artist Richard Carstensen, and example of one of the many beautiful black and white illustrations in the book.

The Alaska Wildlife Notebook Series is available at a number of Alaska bookstores. Alaska Geographic, which manages bookstores at visitor centers in places such as Denali National Park and the Mendenhall Glacier, also carry the book. The Information Center at the Alaska Department of Fish and Game office in Anchorage carries the books, as does the Gulliver’s Books and the farmhouse bookstore at Creamer’s Field in Fairbanks. Books can be obtained by mail by contacting 465-4190. The retail price is $12.95, and wholesale prices are available for bookstores and retailers. 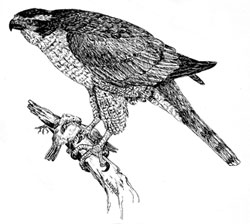 A goshawk illustration by Juneau artist and naturalist Kathy Hocker

Riley Woodford is a writer with the division of wildlife conservation, and served as editor of the new Wildlife Notebook.