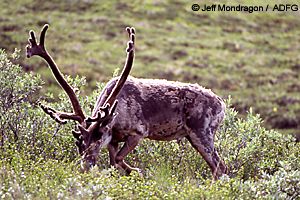 Seven hundred miles of spruce forests, river bottomland and rolling hills stretch between Fairbanks and Whitehorse. At the heart of this country, straddling the Alaska-Yukon border, the Fortymile River flows north into the Yukon River. This region is home to the Fortymile Caribou herd.

In the 1920s, estimates of the size of the herd ranged from 350,000 to more than half a million animals. The herd's geographic range encompassed some 85,000 square miles from Whitehorse to the White Mountains north of Fairbanks.

Population estimates from around 1950 put the number between 46,000 and 60,000. In the late 1960s, Alaskans and Yukoners watched the herd decline to 7,000 - some estimates put the herd at just 5,000 animals. A variety of factors, including tough winters, hungry wolves, and overhunting (due in part to the vastly improved highway access to the region) had taken their toll, and the herd dropped to a fraction of its former size, inhabiting a small portion of its former range.

The region's abundant willows, lichens and grasses had supported a far larger herd, and the range was in good condition. The herd grew somewhat over the next 20 years, but stabilized at about 22,000 animals. Although calf birth rates were good, the population remained low due to poor calf survival. In the mid-1990s, scientists, hunters, environmentalists and Natives groups from both sides of the border formed the Fortymile Caribou Herd Planning Team to develop a strategy to build the herd.

Their mission was straightforward: to restore the abundance and diversity of wildlife in the ecosystem, of which the Fortymile herd is the most important indicator species, and to promote healthy wildlife populations for their intrinsic value, as well as consumptive and nonconsumptive uses. 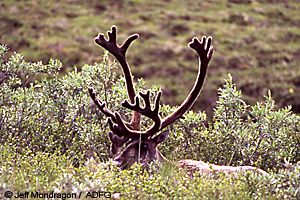 The recovery plan involved reducing hunter harvest for five years and improving summer calf survival by reducing predation. As part of the recovery effort, Yukon stopped all sport hunting of Fortymile caribou, the Tr'ondek Hwech'in First Nation voluntarily gave up their subsistence harvest, and Alaskans reduced their annual harvest from 400-500 caribou to 150 bulls per year for the duration of the plan.

Reducing wolf predation was a key element of the plan. A combination of public trapping and non-lethal methods, such as moving wolves out of the area and sterilizing the remaining dominant pair, greatly increased summer caribou calf survival. Several long, warm summers and high pregnancy rates complemented the efforts. In the summer of 1999, biologist saw an increase in the caribou population to 33,110 animals.

Last fall - for the first time 30 years - the growing herd moved into territory that had been unoccupied for decades. This year, Alaska Fish and Game biologists Jeff Gross and Rod Bortje counted 43,000 caribou in the Fortymile herd, confirming that the herd has doubled in size in the past eight years.

That's good news for hunters and wildlife viewers. Alaska hunter harvest was set at 850 caribou this year. This summer, photographers and motorists on the Top of the World Highway and the Taylor Highway watched caribou crossing the roads as they returned to their former range.

In October, about 9,000 Fortymile caribou moved into the Chena River Valley near Fairbanks, congregating near Chena Hot Springs, while 25,000 more caribou were loitering around Far Mountain, about 10 miles further east.