Gathering Data on Harbor Seals in Endicott Arm
The Equipment

By Amy Carroll and Gail Blundell 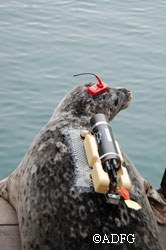 A seal prepares to disembark from the M/V Steller, fully equipped with gear.

The harbor seal population decline in Glacier Bay has scientists concerned---numbers have been declining at a rate of more than 14 percent per year since 1992. This has continued despite strict regulation of vessel traffic, a suspected stressor.

The harbor seal research program, led by Alaska Department of Fish and Game’s Dr. Gail Blundell, has been collaborating with other agencies to gather data on harbor seal populations.

In late spring of 2008, Blundell’s research trip to Endicott Arm, an important pupping site about 40 miles south of Juneau, Alaska, included scientists from NOAA, The Alaska Sea Life Center, as well as some volunteers. Their hope is that data gathered will help reveal if vessel disturbance is affecting population, as vessel traffic is unregulated in the Tracy Arm Ford’s Terror (TAFT) Wilderness Area.

Ice blocked the entrance to Tracy Arm, so data was collected from seals captured in Endicott Arm. To collect this data, various instruments were glued to captured seals to record their physiology and track their movements.

Tissue Samples and Identification: Tissue samples taken from the seals included blood, blubber, feces, hair, skin, whisker and viral. In addition, their back flippers were tagged and they received a PIT (passive integrated transponder) tag or microchip---the same thing your cat or dog is given at the pound, and the same thing aliens implanted in Scully’s neck.

CritterCams: In collaboration with National Geographic, CritterCams were attached to the back of the largest seals, as a broad flat surface is needed to properly attach the mount. After a mount is glued to the seal’s back, the CritterCam is attached. It is programmed to release in 24 hours and float to the surface, where it can be tracked using an onboard radio beacon.

CritterCams record the seals actions, what it does, where it goes – “see what the seals see” for 24 hours. They are programmed to record 8 hours of video per deployment.

Mike Shepard, a mechanical engineer with National Geographic, was onboard working with the programming of the first CritterCam deployed on this trip. It had gone AWOL. “They can be tracked for about 20 miles if it’s open ocean, but with all these mountains the range is much shorter,” he said. The CritterCam’s depth range is 1,000 meters, but he thought it could probably withstand 1,500 meters. Several days later a signal was finally detected and a Boston Whaler with Gail Blundell and volunteer Jayson Owen was dispatched to pick it up.

More information about CritterCams can be found on the National Geographic website.

VHF Head Mounts: All seals captured received a head mount, except for one wee pup deemed too small. The head mount transmits a signal when the seal is on the surface and the antenna is above water. At this time, a specific seal can be tracked—a telemetry receiver is used to listen for that headmount’s specific frequency to determine the presence, absence, or location of that particular seal.

Three remote monitoring systems are set up to continuously scan for all frequencies deployed in the area to record the time of day the frequencies were detected. A fourth monitoring system is scheduled to be installed soon. One of these systems is close to the glacier where seals usually haul out and another is installed farther out each arm and will only record the presence of a seal passing by on its way out of the fjord. Altogether, these four systems will help researchers determine whether seals tagged in Endicott Arm move to Tracy Arm, and if they do, the system will monitor the time of day the seals leave to forage and the time of their return.

The head mount comes off when the seals molt in summer. They are not picked up, as they do not store data.

Heat Rate Receivers and Time Depth Recorders: Data gathered from these devices include daily energy costs, haul-out patterns and the time and length of foraging in the presence and absence of vessels. The changes in the seal’s heart rate during vessel traffic determine how more energy is expended in response to stress. Shawna Karpovich, a physiologist from the University of Alaska Fairbanks, attached 16 of these to seals in Endicott Arm. This instrument consists of a multicolored foam box encasing electronic equipment with electrodes attached. The box is epoxied to the seals back and the electrodes to sides. The electrodes transmit the heart rate data to the receiver that stores the data. The data is downloaded when the electronic equipment is retrieved.

Gail Blundell and Jayson Owen on the back deck of the Steller in Endicott Arm. Owen is sporting a black eye from a particularly boisterous seal.

The heart rate receivers and time depth recorders are brightly colored and come off when the seals molt in summer. They are outfitted with radio transmitters so their location can be tracked and the data can be collected once they are shed.

Remote Cameras: Vessel entries into the Endicott Arm will be recorded several times an hour. These photos will be compared with the heart rate monitor and time depth recorder data to see if the seals are stressed when vessels pass by.

Ultrasound: Dr. Lori Polasek, a research scientist from the Alaska Sea Life Center, was using ultrasound to record blubber depth of the seals. Currently the standard method of determining body composition in seals is a D2O injection. Ultrasound is much faster and less invasive. Polasek admits that the D2O numbers and the ultrasound numbers do not exactly match up, but is confident, that with years of data from captive animals as well as seals in the wild, she can come up with a conversion formula. She hopes to publish her results soon.