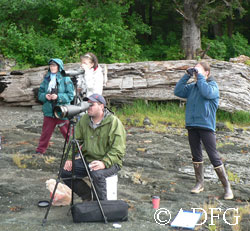 Citizen scientists in 2007 participating in the Murrelet Watch program.

For the past four years, Alaska Department of Fish and Game non-game biologist, Matt Kirchhoff has been researching murrelets to better understand their distribution and abundance and how their populations may be regionally changing. He’s also been evaluating survey methods to determine the most effective means for long-term monitoring of marbled murrelets in Southeast Alaska including at-sea surveys, radar counts, audio-visual counts and flyway counts.

In a region with 14,000 miles of shoreline and thousands of bays and inlets, Southeast Alaska poses interesting challenges for biologists trying to get a handle on the region’s ‘signature seabird’. It would be virtually impossible to survey the entire region. Instead, a number of key survey sites have been established where volunteers and biologists are able to monitor these birds over consecutive years. It is the time and energy of valuable volunteers that make this effort both viable and effective.

Murrelet Watch, a citizen science monitoring program, is gearing up for its second season with many volunteers returning this year to lend a hand. The program continues to seek additional volunteers to expand survey efforts this field season. The program provides an opportunity for private citizens to assist biologists in conducting flyway counts from survey locations along shorelines in Ketchikan, Sitka and Juneau. This year we are adding two remote field sites at Point August and Point Couverden in northern Southeast’s Icy Straits, where an astounding number of murrelets pass by en route to the rich waters of Pt. Adolphus and Glacier Bay.

While most seabirds nest in dense island colonies, the marbled murrelet is a solitary, secretive nester, preferring the moss-laden boughs of old-growth trees. The birds may travel miles from nesting areas to the sea, where they forage on schooling fish such as herring, capelin and sand lance. Once the chick hatches, parents take turns flying back and forth between foraging areas and the nest delivering food to a single nestling. It is during this period when both adults are taking turns bringing fish back to the chick that is the ideal time for conducting flyway counts. These birds represent the adult breeding population. In an effort the capture this peak period, this year’s program will concentrate all community based flyway counts during a 10-day period in mid-July. 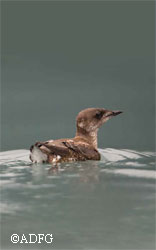 A marbled murrelet. To learn more about these fascinating seabirds, please call or drop by your local ADF&G area office to receive a copy of “Marbled Murrelets in Southeast Alaska,” a free ADF&G full color 20-page booklet.

Participating volunteers are up and out of the house before most people are even awake. Working in pairs, volunteers take turns in front of spotting scopes, observing and counting murrelets as the birds fly by the scope en route to foraging or nesting areas. Other volunteer pairs work an evening shift, enjoying the day’s end while spotting murrelets. During peak periods, spotters may see dozens to hundreds of birds flying by during their surveys.

Interested individuals need not be expert birders. We will provide all of the training and tools that you’ll need to be a part of this year’s Murrelet Watch team. Information gathered is vital to conserving Marbled Murrelets and the habitats they depend upon. Please join us in this interesting and often fun pursuit of learning more about marbled murrelets in Southeast Alaska. If you’re interesting in participating in this year’s flyway counts, please contact Kristen Romanoff at (907) 465-4292 or email at Kristen.romanoff@alaska.gov. To learn more about these fascinating seabirds, please call or drop by your local ADF&G area office to receive a copy of “Marbled Murrelets in Southeast Alaska,” a free ADF&G full color 20-page booklet.

Kristen Romanoff is an educator with the Alaska Department of Fish and Game, Division of Wildlife Conservation. She is based in Douglas.