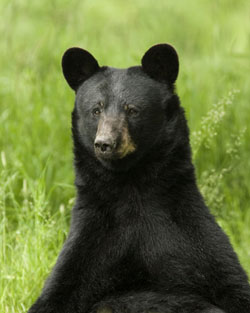 Have you ever wondered what bears do when they hibernate, how wood frogs freeze solid or how far caribou migrate? Email your questions concerning wildlife to ADF&G educator Elizabeth Manning (elizabeth.manning@alaska.gov) and she will try to find an answer from an expert. Each month, Alaska Fish and Wildlife News will highlight one of the inquiries. Here is this month’s question, and answer:

A: Yes. Bears do love honey and are attracted to beehives. But unlike in Winnie the Pooh, the bears eat more than just honey. They will also consume the bees and larvae inside the beehive, which are a good source of protein. Both brown and black bears will raid beehives.

There are no native bees in Alaska that gather in hives and produce honey – our native bees are more solitary in nature, according to insect expert Fred Sorensen of the Cooperative Extension Service – but beekeepers in the state do import European honeybees for making honey. Occasionally, swarms of bees including the queen will abandon beekeeping operations if conditions become too crowded. Those swarms of bees can produce honey in the wild, but cannot survive Alaska’s cold winter out in the elements, Sorensen said.

Wildlife managers recommend that beekeepers use electric fences to keep bears out of their beehives, though some bears will go right through electric fences and endure the shock once they get a taste of honey. Several strand fences work better than one strand. It also helps if beekeeping operations are placed in open areas, away from the cover of forests or bear travel routes. Another recommendation is to not put out beehives in spring, when bears are hungry after hibernation and food is limited.

Dick Allen, a local Anchorage beekeeper, has had a brown bear tip over one of his hives and dragged off some of the frames, and he has even heard one report of a beaver carrying away a frame from a hive.

Elizabeth Manning is a nature writer and an educator with the Alaska Department of Fish and Game.