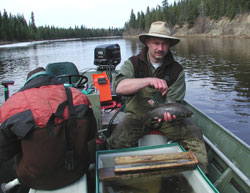 I’m perched in the open door of a Hughes 500 helicopter, pouring water from a 30-gallon bucket filled with fingerling rainbow trout. The rotors are whipping up the water of Craig Lake, but the fish seem to make the 20-foot fall just fine. Over the helmet intercom the pilot asks if the fish are off okay. I peer out the door and report that a few are flopping on the skid plate. The next thing I know we’re at a 30-degree angle and the fish slide off into the water. The only thing keeping me from being transplanted into the lake are my arms T-boned in the doorway. The pilot excitedly asks, “Did we save ‘em?” I reply, “Yup,” through my clamped teeth and we take off for the next lake.

Stocking rainbow trout, estimating populations of fish in various lakes and streams, visiting places most people haven’t heard of, meeting some of Alaska’s most interesting people, presenting information to the Board of Fisheries – these and so many more adventures awaited me when I began my career with the Alaska Department of Fish and Game in 1983.

I grew up in the Southeast Alaska town of Sitka. In this resource rich area I worked summers on commercial fishing boats and with my brother commercially diving for abalone. I watched my father, Jim Parker, manage intense commercial salmon and herring fisheries for Fish and Game for the first 20 years of statehood.

Not wanting to follow exactly in my fathers footsteps, I thought that aquaculture might involve less interaction with fishermen than fisheries management. After college my humble beginnings were with the Northern Southeast Aquaculture Regional Association where I did some limnology work and helped start a small hatchery in Silver Bay. These were three great years preparing me to become a fisheries biologist with Fish and Game. What I was not prepared for was to go from rain-soaked Sitka to the desert-like region of the interior, Delta Junction, experiencing minus 50 degree winter temperatures, living in a cabin, raising a family without running water or electricity for several years, driving hundreds of miles to reach my destinations (Sitka had only 12 miles of road), hunting moose, and boating on glacially fed rivers.

I started with the Division of Sport Fish in Delta Junction as an entry level biologist, assisting Richard Peckham, the area manager at the time. I followed the stocking truck all the way to the Canadian border, learned to negotiate small streams in a jet boat, checked angler’s creels, and canoed the Delta River with grayling biologist Bill Ridder. I was captivated by this new country and its people. My fisheries background helped me to get in on new research projects targeting species the department knew little about, such as burbot and northern pike, and which the department and anglers were concerned were being over fished.

Our newly appointed regional supervisor at the time, John Clark, was very much a researcher at heart and secured money to fund these species-specific projects for many years, giving us valuable information to manage fish populations and to propose regulations that maintain these populations. I remember the energy that galvanized the biologists at the time in designing methods to sample these fish. It was awesome to be involved in this process and work along side a diverse group of people in the department.

My initial involvement in the mid-1980s was mostly with burbot in lakes and in the Tanana River. I worked with Gary Pearse and Jerry Hallberg from Fairbanks, Butch Potterville from the Glennallen office, and Dave Bernard from Anchorage. Several projects on other species were being developed concurrently, and for me it was a period of growth and advancement in the department. I became the area management biologist in 1989 after Dick Peckham retired. With so much research going on in the region it was difficult at first to distinguish manager from biologist, as we were all working in the field.

In the late 1980’s we worked on several lakes conducting northern pike studies, estimating the number of fish in the population and learning life history information. George Lake is the largest pike fishery in the Delta Junction area. To capture pike in George Lake we used a 300-foot, seine net with a large pocket in the middle. We piled the seine on a plywood deck in the bow of the boat and pulled one end of the net from shore in a large loop back onto itself. Five fishery technicians and I hauled each end of the net in towards the shore: as the pike detected the disturbance they fled from shore only to be corralled in the pocket. 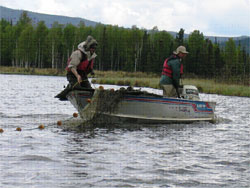 One day, right after lunch, the sun came out, causing the waters to warm. Pike moved into the shallows to commence spawning. As we moved the seine about in a small, muddy bay we noticed large swirls in the mud all around us. I hollered over the drone of the motor, “Looks like a big haul, get ready!” Once the net ends were together it was evident there were already a large number of fish splashing in the pocket As the net was pulled tighter, big fish in the muddy water were bumping hard into us, eliciting some surprised yelps. We began filling our tubs full of fish, pulling one after another from the net and ignoring the fact that these big fish have rows of razor sharp teeth.

The tubs were so full I yelled to a couple of the technicians to fill our tender boats with water for the fish. While they were swamping the boats the remaining fish in the net attempted to move the whole seine away from us, with unbelievable collective strength. We ended up with more than 300 fish in the boats and tubs, and spent the rest of the day tagging and processing the fish. One technician constantly tended to the fish, replacing water in the tubs and boats to keep the fish in good condition. When the last fish was processed, the mud-and-slime-encrusted workers collapsed on the beach, amazed at how the last five hours had just evaporated. I always admired our seasonal workers; many of them are now permanent employees of the department who got their start on projects just like this one.

The reality of being a manager comes when you present regulation ideas to the public, the Fish and Game advisory committees, interested anglers, and finally the Alaska Board of Fisheries, which makes the final decisions. The advisory committee has been indispensable in my experience. The relationship between the manager and the committee is forged because both are familiar with the resource and the scientific data. There is not complete agreement on every regulatory proposal, but for most sport fishing issues, this system works well in Alaska.

In a small office such as we have in Delta, I am fortunate to work with my colleague and friend Steve Dubois, the wildlife manager. Like me, he has been in Delta for many years, and his management of the Delta Bison herd and other hunting opportunities are much appreciated by hunters in this area. We have been able to encourage each other over our professional challenges as well as share our families’ experiences. These life experiences are a career blessing few are able to enjoy.

As managers, one of the things we encounter on a daily basis is contact with anglers and hunters who come into our office. Some need permits, others have simple questions about what the area has to offer, and others are planning extensive float trips that require detailed information of what they can expect along the way. There have been so many faces and names over the years it’s a wonder I can remember any of them.

One of the most indispensable people in our field office is Dave Davenport, who was hired 19 years ago to assist us with public inquiries. Dave has a wealth of local knowledge from years of guiding and fighting forest fires around the state. With indescribable patience he figuratively walks sheep hunters into the mountains, providing insight and information that clearly exceed the hunters’ expectations.

I think the satisfaction of this job is that the public is served. We’ve done our job when people understand the opportunities that are available to them in this wonderful country we live in.

Fronty Parker is the Upper Tanana Area Management Biologist for the Alaska Department of Fish and Game, Division of Sport Fish. He’s based in Delta Junction, Alaska