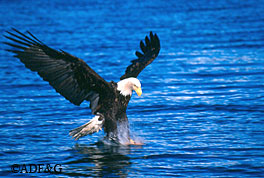 An eagle swoops down to grab a fish. Eagles weigh 8 to 12 pounds and can carry about three or four pounds. ADF&G photo.

Every few years a story makes the rounds about a bald eagle carrying off a dog or trying to snatch someone’s cat. Biologists who study birds of prey and folks who live around eagles have seen plenty snatching and carrying – as well as swooping and swimming – and they offered insights into what eagles really can and cannot do.

Bald eagles are strong, aggressive birds but like everything that flies they are governed by aerodynamics. The wings of an eagle need to support the eight to 12-pound bird as well as whatever the bird is carrying, and best estimates put the lifting power of an eagle at four or five pounds. But it’s not quite that simple.

Lift is dependent not only on wing size, but on airspeed. The faster a bird (or plane) is flying, the greater the lift potential. An eagle that lands on the beach to grab a fish, and then takes off again, is limited to a smaller load than an eagle that swoops down at 20 or 30 miles an hour and snatches up a fish. That momentum and speed gives the bird the ability to carry more weight.

Biologist Ron Clarke earned his masters degree studying birds of prey, and he’s a falconer who trains raptors. He hunts with a gyrfalcon and a peregrine falcon, and said his 45-ounce gyr can carry an 8-ounce bufflehead duck pretty easily. “He can't do the same with a mallard, though,” he said. At about two pounds, a mallard is four times the weight of a bufflehead.

Clarke said an eagle with momentum is a different story.

“On a wide-open beach, I have no doubt that an eagle with a full head of steam could pick up a six- or eight-pound dog and just keep on going,” Clarke said. “If it landed to kill a ten-pounder, and then tried to pick up and fly from a dead stop, could it get off the ground? Probably not.”

“There used to be stories about eagles carrying off babies and little kids, and none of that has ever been documented,” he said. “They can pick up and carry four or five pounds, maximum, and actually fly off with it. They can lift a little more and hop it along, but they can’t carry it off.”

Flying may be an eagle’s birthright, but it requires skill. Falconers and birdwatchers can attest that swooping down to nab dinner, or snatching food off the water, requires techniques that are honed with experience. Young predators develop their hunting skills by trial and error, play, and testing limits. Young eagles will swoop on floating bottles, attempt to lift salmon that are too heavy, and investigate new objects. 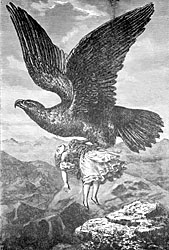 “There used to be stories about eagles carrying off babies and little kids, and none of that has ever been documented,” said Mike Jacobson, an eagle expert.

Jacobson said an immature eagle is most likely to swoop down on something inappropriate, like a large dog on the beach. People then overreact and claim that eagles are hunting dogs. “It gets exaggerated” he said. “Eagles don’t hunt cats and small dogs.”

The vast majority of eagles’ diet in Southeast is fish. Jacobson said in other areas the diet varies more, as eagles take advantage of local opportunities. Eagles that live near seabird colonies will eat more birds, and eagles in the Interior take more birds and small mammals than eagles in Southeast. Jacobson once saw an eagle carrying a mink and he’s heard stories of eagles carrying small muskrats. Eagles in the Aleutians are known to prey on sea otter pups during pupping season. But fish is the bald eagles’ bread and butter.

Although bald eagles don’t actively target cats, Jacobson has heard a few stories that seemed plausible. A small cat is certainly within an eagle’s abilities. “Eagles have occasionally nailed people’s cats,” he said. “It’s rare, but people do see them swoop down on cats sometimes.”

David Hunsaker once found a cat collar in an eagle nest. The nest is right outside the window of his Tee Harbor home, and he’s done a great deal of eagle watching over the past dozen years. He and his wife watched a pair of eagles build the nest, and they’ve seen eagles incubate eggs, deliver food and raise a number of broods of chicks. They’ve watched the chicks grow and fledge.

“The cat collar was funny,” he said. “It had a bell attached to warn birds. It was still buckled.”

Hunsaker added that the collar doesn’t necessarily prove the eagles carried a cat to the nest. Also in the nest was a child’s rattle toy. “I envision that rattle clutched in a chubby fist, but it’s not likely the eagles caught a child.”

It’s also possible the cat was a scavenged roadkill. He’s seen fur in the nest a few times, and a few bloody birds, but said the eagles are almost exclusively fish eaters.

“The majority are herring or smelt, small fish about eight inches long,” he said. He’s seen plenty of salmon delivered to the nest, usually in pieces. “They’ll bring half a salmon, usually a pink, then take off and come back with what appears to be the other half. So they dismember it somewhere. I’ve never seen them bring a full coho or sockeye, but pieces.”

Hunsaker doubts the accounts of eagles taking small dogs not because they couldn’t carry it, but because in his observations, eagles are very wary of people. Although the nest is near the house, the birds don’t roost on the peak of the house, the deck or nearby power poles. “They are really skittish around people,” he said. “They are not going to snatch a dog off a leash, or right in front of the owner.” 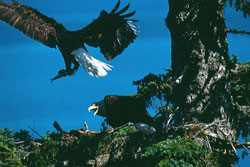 Herring and other small fish are the bread and butter for bald eagels in coastal Alaska. ADF&G photo.

Biologist Phil Schempf works for the U. S. Fish and Wildlife Service in raptor and migratory bird management. He has no doubt an eagle could kill a small dog or cat if the opportunity presented itself, and carry it or at least pieces of it to a nest. “My feeling is that it doesn't happen very often though,” he wrote in an e-mail. “I'd speculate that is due to eagles being leery of approaching people or foraging in novel areas such as people's yards. Eagles typically are foraging along beaches or riparian areas where it is rare for dogs and cats to be unattended by their owners.”

An eagle is sometimes spotted in the water, talons latched on a heavy salmon, laboriously rowing to shore with its wings. It’s a clumsy swimming style, but it works. It’s said that the eagle can’t let go, that the talons somehow lock on to the fish. That’s not true. There is no involuntary locking mechanism, and the eagle could let go if it wished. The hungry bird has simply decided the meal is worth the swim.

Jacobson said that over the years there have been a number of observations of eagles grabbing fish and getting pulled underwater. He said it’s not because they can’t release their talons, “They can let go,” he said.

“It’s common for them to get a hold of a fish that’s too heavy to fly with…they can’t take off but they can tow it to shore, rowing with their wings. They’re pretty good swimmers. They have thick down so they float pretty well. Occasionally they’ll drown if they’re too far from shore.”

State wildlife biologist Rich Lowell of Petersburg said it’s not unusual for eagles to end up in the water. His office next door to a fish processing plant overlooks the water and he’s seen an eagle intentionally land on the water to pick up fish scraps discarded by the workers. He said contrary to popular belief, an eagle can take off from the surface of the water as long as it does not sit there too long and get its wings wet. He added that while eagles can certainly lock on with their talons, it is a purely voluntary action and they can release at will.