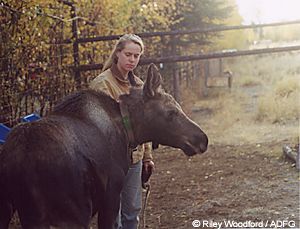 On a crisp morning this fall, biologist Stacy Jenkins tucked two oversize baby bottles under her arms and rallied her reinforcements. Her three babies were just a few months old, but they were pushy, hungry and well over 100 pounds each.

Tom Lohuis carried a third bottle of warm milk, and John Crouse swung open the gate at the Kenai Moose Research Center. The three moose, bleating at the sight of breakfast, rushed headlong for the scientists.

Moose are popular with photographers and wildlife watchers, and Alaska's official land mammal is hunted by more people than any other animal in the state. Between 6,000 and 8,000 moose are harvested each year, providing more than three million pounds of meat.

Knowing what makes a moose healthy, and what it takes to maintain healthy moose populations, is important to the Alaska Department of Fish and Game - and to wildlife managers across the North. But a full-grown, three-quarter-ton moose can be a dangerous animal to study. A moose kick can kill a wolf, and more than one person has been on the receiving end of such deadly blows.

It's tough for a biologist to dog the heels of a foraging wild moose to watch exactly how it eats, or to closely monitor the pregnancy of a cow moose. But tame moose don't object to human company. By bottle raising moose and conditioning them to human contact, biologists at the Kenai Moose Research Center have cultivated cooperative subjects.

"This facility has so much to offer," said Jenkins, who has worked at the center for five years. "There are things you can do here that you can't do in the wild, and plenty of things you can test out and apply to the wild."

The facility, built in the late 1960s, is tucked into the rolling hill and lake country of the northwestern Kenai Peninsula. An hour drive down gravel roads from Sterling, the center is home to 19 moose and 23 caribou. Sixteen miles of tall fencing encloses four tracts, each a square-mile, with a landscape of trees, meadows and small lakes. In a farm-like setting, the lab and research facilities, bunkhouse and caretaker's cabin are surrounded by rolls of fencing, building materials and ranching paraphernalia. 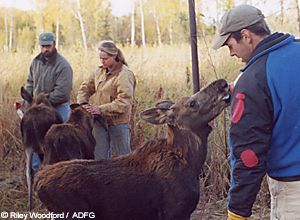 Over the years, moose researchers from Norway, Sweden, Russia, Canada and other American states have worked on projects at the center. Many of the studies at the center are long term, because scientists are able to work with the same animals for years, an opportunity rarely available in the wild.

"More than 250 scientific papers based on research at the center have been published," said Fish and Game Deputy Commissioner Wayne Regelin, who worked at the center in the 1970s and early '80s. "A lot of pioneering work has been done at the center - how to capture moose using drugs, studies on moose-habitat relationships, various ways to evaluate moose physical condition - it's a leader in moose research."

This summer Tom Lohuis, (pronounced lowhice) a 35-year-old physiologist from Wyoming, took over as director of the facility. (For more info on Tom Lohuis click here.) Crouse, also originally from Wyoming, has been with the center for almost seven years. Together with Jenkins, they juggle duties that range from designing experiments to mending fences.

At the center, what goes in and comes out of a moose can be closely monitored. If a research project requires it, the moose can even be loaded in a trailer and transported. Researchers studying specific environments or vegetation types can see how moose respond when unleashed on a new site.

"The only way to really find what a moose is eating is to watch a moose eat," Jenkins said. "You can go in after the fact and measure bite size and get ideas about what part of the plant they're exploiting. That's why we've put so much effort over the past few years to raise these calves, to have a moose that's tractable and will stand next to you like a dog, but will forage like a wild moose,"

"If you don't have bottle raised animals you really can't do these kinds of studies, they just growl at you."