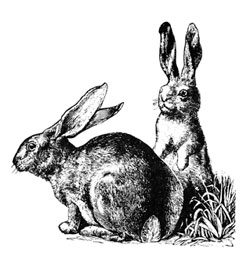 Snowshoe hare populations rise and fall on a ten-year cycle in Interior Alaska, and numbers seem to be peaking this year. Hares provide food for foxes, owls, coyotes, goshawks, golden eagles and are especially important to lynx.

When Carol McIntyre conducted her annual golden eagle nesting surveys in late April this year in Denali National Park and Preserve, she had a hard time keeping her eye on the sky because of what she saw on the ground. "I've never seen that many (snowshoe) hares in the 20 years I've been here," said McIntyre, a biologist for the National Park Service who studies golden eagles. "In some of the willow thickets with good browse, it was like the ground was moving there were so many hares."

The snowshoe hare cycle in Interior Alaska is reaching its peak, if it hasn't already, and that can only mean one thing it won't be long before the population plummets.

"Last year we thought we were at a high and this year we were pretty surprised by the abundance of hares again," said McIntyre, one of only a few people in the state who tracks the hare population for her work with golden eagles, one of the hare's main predators. "We're expecting a crash anytime now."

The snowshoe hare cycle is as predictable as snow in Alaska. Every 10 years, give or take a year or two, the hare population climbs to a peak and then dives off a cliff. It takes only two or three years for the cycle to bottom out before it starts climbing again.

"It's pretty much every 10 years," said Knut Kielland, a plant ecologist at the University of Alaska Fairbanks who has been studying snowshoe hares and their relationship with lynx for about 20 years.

The cycle of snowshoe hares in Alaska matches that in other northern latitudes across Canada.

"That's one of the great mysteries in ecology how these hare populations can be so synchronized," Kielland said. "How populations in Alberta, the Northwest Territories and the Yukon could have anything to with the population in Alaska is a subject of great interest."

The current peak is shaping up as a big one, at least in some parts of the Interior. During the summer, it wasn't unusual for McIntyre and her colleagues to count more than 100 hares on a 30-mile stretch of the Denali Park Road.

"This is a major peak," McIntyre said.

The last hare high in the Interior was 1999-2000 but it was just a "blip" compared to previous highs, Kielland said.

Kielland's research at the Bonanza Creek Experimental Forest is part of a long-term ecological research program that began more than 20 years ago. The project initially involved research in plants, but about 10 years ago Kielland began tracking the snowshoe hare cycle by live trapping hares four times a year in March, June, August and November.

He puts ear tags on the hares he catches, determines if they are male or female, weighs them to figure out when they were born and releases them. Using the total number of hares he catches, the number of recaptures versus first-time catches and the proportion of juveniles captured, Kielland can estimate the hare density in that specific area, which generally coincides with the rest of the Interior.

Using a few alfalfa cubes and chunks of carrot as bait, Kielland and his graduate students set 50 traps and caught 56 hares in four days last week, which translated to an estimated hare density of 1.7 hares per 2.5 acres.

"That's one of the highest (densities) we've ever had for a November count," he said.
State wildlife biologist Steve DuBois with the Alaska Department of Fish and Game in Delta Junction started counting snowshoe hares on a 25-mile stretch of the Richardson Highway south of Delta back in 1995 while conducting breeding bird surveys in the spring, during which he stops every half mile to listen for birds. 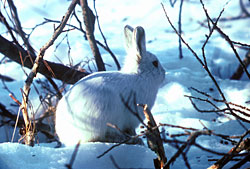 With no designated small game biologist in the state, the Department of Fish and Game doesn't spend a lot of time studying hares, even though they are one of the biggest prey species in the wild food chain, DuBois said. The list of animals that prey on hares ranges from lynx to coyotes to fox to owls to golden eagles to goshawks.

"It helps drive the whole system," he said.

Golden eagles in Denali Park also rely heavily on snowshoe hares when they return to Alaska in the spring, McIntyre said. In the 20 years she has been studying the birds, McIntyre has seen a definite correlation between the number of hares and the number of nesting eagles. The abundance or shortage of hares is a "trigger" that tells eagles whether or not they should nest and lay eggs, she said.

The same is true for great-horned owls, said Jack Whitman at the Department of Fish and Game in Fairbanks.

The snowshoe hare cycle has an impact on Dall sheep, according to research done by state wildlife biologist Steve Arthur, who monitors sheep populations in the Alaska Range. The two main predators of Dall sheep are coyotes and golden eagles, both of which also prey on snowshoe hares. When hares are at a high, coyotes and golden eagles produce more young, which inevitably increases the number of predators on sheep, specifically lambs, Arthur said.

Hares can even have an influence on moose when their population is at a high because they kill potential moose browse by eating the bark off willows.

"When hares get really high they can start girdling plants and killing them," said Tom Paragi, a wildlife biologist who specializes in habitat studies.

Hares are prolific critters, able to produce three, and sometimes four, litters a summer beginning in late April and ending in August.

"Their reproductive output is pretty phenomenal," Paragi said.
Juvenile hares are born fully furred and hit the ground running, literally, he said.
"They can get out and hop right away," Paragi said. "They don't have dens so they just have to run around and hide from predators in overhanging brush."

The oldest hare Kielland has ever seen during his studies was four years old.
"On average they probably don't live more than a year or two in the wild," he said.

Kielland expects the hare population to "ratchet down pretty good" over the winter. Mortality among juvenile hares those born this year is high during the winter, he said.
"In years past we might 60 percent juveniles in August and by March it might be down to 10 percent," he said.

Most of them, he said, "go down the gullet of a predator like a fox or owl or lynx."
The state Department of Fish and Game adjusts the lynx hunting and trapping seasons to coincide with the ups and downs of the snowshoe hare cycle. The state lengthens the seasons when hares are high and shortens them when hares crash. 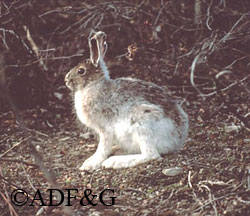 A snowshoe hare between color phases- note the big feet. Hares are different than rabbits. Although they are closely related, hares are born precocial - fully furred with their eyes open, ready to hop around. Rabbits are born blind and hairless and are helpless for several weeks.

This year's lynx trapping season in the eastern Interior (units 20A, 20B and 20E east of the Teklanika River) was extended by 15 days and will be from Dec. 15 to Feb. 15, said biologist Craig Gardner, who tracks the lynx population.

Normally during a hare high, the state opens the lynx trapping season on Nov. 10 but the current hare cycle is an odd one, Gardner said. While the hare and lynx populations appear to be at or near a high in unit 20A south of Fairbanks, that's not the case in unit 20B to the north, east and west.

Gardner recently flew back to Fairbanks from Galena after doing moose surveys and said he didn't see as many hare and lynx tracks as he expected in areas like Minto Flats.

"I wasn't overly impressed by the number of hares and cats I was seeing," he said.

Nobody really knows what causes the hare population to crash. Most experts believe it's a combination of factors that include starvation, predation, disease and overbrowsing.
Whatever the case, "it happens very quickly," Kielland said.

Some studies in the Yukon suggest predation is a significant factor in driving down the hare population faster than it increases, he said.

Another theory is that the plants that snowshoe hares feed on mainly aspen, birch and willow have over time developed a defense mechanism against hares that keeps the population in check.

Retired ecology professor John Bryant, who along with other researchers studied the effect snowshoe hares have on vegetation and vice versa during his 30-plus year tenure at UAF, found that hares don't eat new annual growth on plants because that growth contains a high amount of poisonous toxins. Likewise, they don't eat the part of the old part of the plant that is too woody because it doesn't provide any nutrition.

Hares typically bite twigs off at the base and eat forward, spitting out what they don't want as they go, Bryant said.

"It looks like a corn cob going into mouth," said Bryant, who now lives in Wyoming. "When they get to this year's growth, that gets spit out."

When hares are at a high, they basically mow down all the vegetation that is accessible, which results in only new growth the next year because all the old growth has been removed.

"Once they wipe out all the older growth plant material there's nothing but new growth or very, very old growth," said UAF chemistry professor Tom Clausen, who worked with Bryant. "You have a one- to two-year time frame where the food is just not there."

Kielland hopes to get funding from the National Science Foundation to put radio-collars on both hares and lynx to learn more about hare-lynx interaction. In recent years, Kielland has also tried to determine how dependent lynx are on snowshoe hares as a food source. By analyzing muscle tissue on dead lynx, Kielland said he can figure out if the lynx are eating hares or other things like grouse and squirrels.

"Right now they are eating 75 percent or more snowshoe hares," he said.

Whether that percentage remains that high when the hare cycle crashes or lynx switch to an alternative food source like squirrels, grouse or ptarmigan is something that Kielland is hoping to find out.

Tim Mowry is a staff writer for the Fairbanks Daily News Miner, where this article originally appeared on Nov. 22, 2007. It has been reprinted with gracious permission. Mowry's work tends to highlight the outdoors, and can be seen at
www.newsminer.com