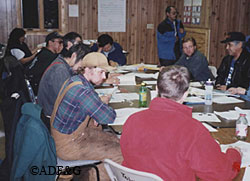 Fish and game advisory committees are the statewide network of grass roots organizations that discuss fish and wildlife management and recommend changes to hunting and fishing regulations.

The Alaska Joint Boards of Fisheries and Game met in October in Anchorage for the first time in more than a decade. This unusual meeting of the combined boards was intended in part to address regulations concerning local fish and game advisory committees – the statewide network of grass roots organizations that discuss fish and wildlife management and recommend changes to hunting and fishing regulations.

The meeting provided a good venue for much-needed discussion about the structure of the advisory committees and the process that takes place between committee members and board members. The advisory committees give the people of Alaska the opportunity to have a voice in fish and game regulations, by making proposals and recommendations to the Board of Game or the Board of Fisheries. These boards establish and modify the state’s regulations for the development and conservation of Alaska’s fish and game resources.

Some advisory committees voiced concerns that their recommendations were disregarded by the boards. Howard Delo said that’s not true. He’s seen the board process from both sides. Delo, former chairman of the Matanuska Valle Advisory Committee, is one of two new members of the Board of Fisheries.

“I think both boards rely heavily on a local AC's expertise and recommendations on proposals affecting their local area,” Delo said. “Other factors which the local AC probably isn't aware of can direct the final outcome on any given proposal. If that outcome is contrary to an AC's recommendation, that doesn't mean the board didn't listen.”

Vince Webster is the other new member of the Board of Fisheries. Webster served on the the Naknek/Kvichak Advisory Committee for 15 years and is a long-time hunter and fisherman. “I believe the interaction between the Boards & ACs during the meeting enlightened both entities of the process. Most of the concerns the ACs brought to the Joint Board are already in Board policy.”

Judkins was pleased with the outcome of the meeting. “It brought out a lot of ideas that the Board can incorporate into its’ meeting format. As a result of the discussions and comments concerning the ACs there will be discussion among board members and at least an increased recognition of the value of the AC input.”

The Joint Board considered several changes to the makeup of the ACs, and after hearing from members of various ACs, decided to implement only selected changes.
“They voiced their concerns and asked the Joint Board to respect their ability to make the best decisions for their local committees in how they functioned and who could sit on them,” Delo said. “The board listened and voted to keep the status quo. I hope the AC's recognize that they were heard and listened to in these matters.”

The Joint Boards established three new advisory committees, the first since 1991. These are Susitna Valley AC, the Stony-Holitna AC, and the North Slope AC. The creation of these new committees will provide better representation for those areas.

A number of changes were proposed to eliminate committees that have been considered inactive and consolidate the communities with other committees. The Joint Board did not pass these proposals due to a lack of support by the representatives from the various committees and communities of the impacted areas. The positive result however, was discovering that some of these committees are indeed active, and in other instances, communities expressed the intent to become active.

“I think progress was made for the committee system.” Delo said. “The various committees reasserted themselves as active participants in the fish and game regulatory process in Alaska.”

The Alaska Joint Boards of Fisheries and Game met in October in Anchorage for the first time in more than a decade.

Delo also expressed his perspective as a new board member and former AC chairman. He said sitting on “the other side of the table” during the Board of Fisheries work session was an eye-opener, especially seeing all the factors which contribute the board members’ decisions on various proposals.

“The flow of information from other government agencies and private consultants was a little mind boggling,” he said. “I have never heard reference to international treaties or endangered species proclamations or such in an AC meeting as potentially influencing whether a proposal is adopted or rejected.”

“My advice to any AC member on any committee is to continue doing what you are doing, but keep in mind that there are many other factors that you are probably not aware of which will influence the board's final decision on a proposal.” he said. “Many of these factors will not become generally known until the actual board meeting is in progress. Keep an open mind on why the board does what it does.”

The Joint Board will not likely meet again to address the advisory committee system in the near future, unless unforeseen circumstances arise that need to be addressed. The improvements made by the board to the committee structure at this meeting should meet the needs of the state’s fish and game regulatory process for many years to come.

Kristy Tibbles is the executive director of the Board of Game at the Alaska Department of Fish and Game.