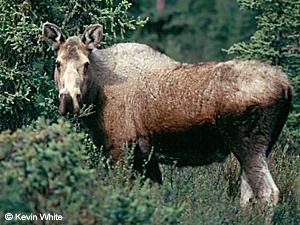 Do you live in a community where moose outnumber people? For the winter residents of Gustavus the answer is a resounding "Yes!"

In fact, there are about twice as many moose living on the Gustavus forelands this winter as there are human inhabitants. This hasn't always been the case, however, as moose have been known to occur in this area only for the last 40 years or so.

Gustavus, a small community about 40 miles west of Juneau, borders Glacier Bay National Park. In 1958, long-time Gustavus resident Bill White documented the first known incidence of moose in the area. But it wasn't until 1986 that moose were considered common. During the winter of 1998, the Alaska Department of Fish and Game conducted the first aerial survey of the area and estimated the moose population to number about 180 animals. This was considered to be a relatively high density at the time.

However, subsequent annual winter surveys documented a very rapid increase in the moose population, and a survey this December indicated that the population numbers at least 390 animals. This estimated density of 3.8 moose per square kilometer is among the highest recorded in Alaska.

The amazing rate of population growth of this population has sparked the interest of biologists and local residents alike. Many wonder, how did moose come to inhabit the Gustavus forelands in the first place?

To the best of our knowledge, moose colonized Gustavus naturally over a period of many years, probably decades, from a source population in the Haines area. Beginning sometime in the early-mid 20th century, moose are believed to have slowly dispersed south along the Chilkat range following natural movement corridors along the shoreline and river systems, and ultimately established several small populations in places such as the Endicott River, Adams Inlet, St. James Bay, and Point Couverden.

It is from the Adams Inlet population that the ancestors of the Gustavus population are thought to have originated. However, it is also possible that moose may have colonized Gustavus from the Point Couverden area via Home Shore and Excursion Inlet. Whatever the origin of the Gustavus moose population one thing is certain: moose are now the dominant feature of the local wildlife community.

The exceptionally high density of moose in the Gustavus forelands represents a highly valued resource for wildlife watchers and hunters alike. As moose have increased, so has the allowable harvest, ands this fall, 49 bulls and 34 cows were harvested. 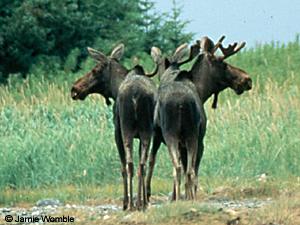 Moose are big animals, and they have a significant impact on their environment. Recent research has raised questions about the long-term sustainability of this population.

For example, ongoing monitoring of the winter food base has documented very high levels of browsing of preferred food items such as Barclay's willow. Further, preliminary findings from willow exclosure experiments suggest that such high levels of herbivory might be negatively influencing the vigor and productivity of these important winter forages.

Ultimately, if this pattern holds true, the amount of winter food available for moose consumption could be reduced over the next several years. Eventually this could reduce the carrying capacity, or number of animals that could be supported, on the Gustavus forelands.

The effects of moose browsing also can have wide-ranging effects on ecosystems that go beyond those directly affecting moose themselves. In fact, moose have been referred to as "ecosystem engineers" because of the sometimes dramatic ways in which they can change how ecosystems operate and the species assemblages that occupy them.

For example, past researchers have found that high levels of moose browsing and occupancy can influence soil nutrient cycling processes and change plant community composition. In a chain link reaction, these changes then influence the number and different types of insects and birds that live in habitats heavily browsed by moose.

Of course, it may take several years before we see such remarkable changes in Gustavus. Nevertheless, the notion of moose "engineering" the ecological make-up of a familiar, local environment is a fascinating topic that will be interesting to monitor in years to come.

So what is the future of the Gustavus moose population? Are the changes that moose catalyze in their environments good or bad? Will moose populations be able to persist at current high densities in the long term?

These are all difficult questions to answer at this point. But with continued moose research and monitoring, Fish and Game biologists hope to chart a conservation and management strategy that will maintain Gustavus' unique distinction as being Southeast Alaska's only community with more moose than people.

Kevin White can be reached at kevin.white@alaska.gov>.