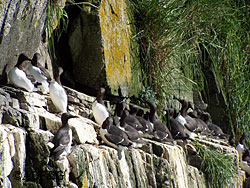 A colony of murres. Colony sizes for common murres ranged from nearly 80,000 birds on North Twin Island to just about 5,000 birds on High Island.

Imagine bobbing in a boat, salt spray peppering your face, a hat pulled down over your ears, pressing binoculars to your eyes counting thousands of seabirds for hours on end.

That is how Fish and Game biologists Marian Snively and Joe Meehan have spent much of their time the past two summers, along with U.S. Fish and Wildlife biologist Deb Rudis and three Fish and Game volunteers, Laura Kruger, Andy Reeves and Lisa Meehan.

The team surveyed nesting populations of seabirds in the northern Bristol Bay region of Alaska, including in and around the Walrus Islands State Game Sanctuary. The work was tedious at times, and nausea-inducing for some, but the data was crucial for filling in holes in ongoing seabird monitoring efforts.

“It needed to be done,” Snively said.

Monitoring seabird populations throughout Alaska is primarily done by the U.S. Fish and Wildlife Service and the U.S. Geological Survey. However, the Bristol Bay region is one of several areas in the state that has not been regularly surveyed, said Joe Meehan, Fish and Game’s lands and refuges coordinator. The most consistently surveyed areas to date are in the Aleutian Islands, Southeast Alaska and Prince William Sound.

Because of the scarcity of seabird data in Bristol Bay and because it is important for state managers to know about wildlife populations in and around the Walrus Islands State Game Sanctuary, Meehan submitted a research proposal to the State Wildlife Grant program. He was awarded two years of funding for monitoring seabirds in Bristol Bay.

The work was done cooperatively with the U.S. Fish and Wildlife Service and Togiak National Wildlife Refuge. Surveys were conducted from the 40-foot diesel motorboat, the Inconnu, owned by tour operator Terry Johnson.

The team’s second field season concluded this past July, although counts of digital images will continue for some time, Snively said. When all the data is recorded, it should provide a baseline level of nesting populations and possibly a way to assess population changes over the past 20 years. 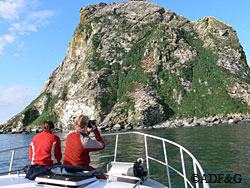 Seabirds are considered good “biomonitors,” meaning changes within their populations can help biologists identify potential environmental problems associated with human development, global climate change or other natural factors such as predation by other animals or smaller-scale climate shifts.

Northern Bristol Bay is an important nesting area for seabirds. Approximately three percent of Alaska’s seabird population, or 1.5 million birds, are thought to nest there, according to Meehan.

The boundaries of the current Bristol Bay seabird survey ranged from Kulukak Point to Chagvan Bay on the mainland and Hagemeister, Shaiak and Bird Rock islands. Also included are the islands of the Walrus Islands State Game Sanctuary – Round Island, Summit Island, Crooked Island, High Island, the Twins and Black Rock. The area is full of steep cliff faces and craggy peaks, ideal habitat for nesting seabirds.

So how do the biologists actually count seabirds?

At each identified rookery, the survey team attempted to count every single nesting bird found on the cliff faces. But at times the colonies were too dense to count birds individually. In those cases, the teams counted by fives, tens and 20s, and even by 100s in very dense colonies such as North Twin Island.

The biologists paired off in groups of two, delineated survey boundaries and then each counted the same seabird species. They then compared their counts to ensure they were within 10 percent of each other. 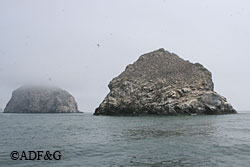 The boundaries of the Bristol Bay seabird survey ranged from Kulukak Point to Chagvan Bay on the mainland and Hagemeister, Shaiak and Bird Rock islands. Also included are the islands of the Walrus Islands State Game Sanctuary, such as The Twins, shown here.

Each day, the biologists counted tens of thousands of birds. Colony sizes for common murres, for example, ranged from nearly 80,000 birds on North Twin Island to just about 5,000 birds on High Island. Black-legged kittiwake colonies tended to be smaller, ranging in size from seven birds on Summit Island to more than 28,000 on Round Island.

Digital images were also snapped of each survey area. Those images are counted by computer back in the office, and those counts compared to the field counts.

Andy Reeves, a biology graduate student from University of Alaska Anchorage, was part of the field crew and has been assisting with the digital counts. Reeves said they have found the digital counts to be about 25 percent higher on average than the field counts. Even so, the biologists know they are not seeing every bird. Sometimes nesting birds are obscured by rocks, crevices, shadows or other birds, he said.

Still, they hope it will prove to be a more accurate method to compare against in future seabird surveys. Future biologists will have the digital images to study when comparing future surveys, Meehan and Snively said.

Comparing the current surveys to past years has proved to be problematic due to differences in survey methods and changing technologies for photographic counts, Snively said.

“We’re getting a baseline now, but this will hopefully be more comparable in future years,” she said.

And what is like to count seabirds all day long on a computer screen?

“I see seabirds in every shape and form,” Reeves said of the digital counts. “Sometimes they start moving around on the screen and talking to me and that’s when I take a break.”