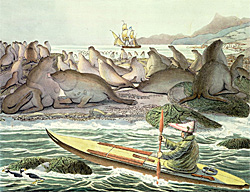 Archaeological digs at prehistoric sites in Alaska are revealing that Steller sea lions were profoundly important to Alaska’s Native people.

Sea lions were harvested for meat, oil and blubber. Bone and whiskers were used for tools, sinews for cordage, intestines and stomachs for waterproof containers and clothing, and the skins were used for baidarkas (kayaks). Unalaska sites have yielded implements and decorative pieces fashioned from sea lion bone.

In prehistoric archaeological sites, sea lions appear to have replaced walrus as a distinct marine mammal species in coastal areas of Alaska dominated by a Pacific maritime climate. These areas include the Pacific coast of the Alaska Peninsula, Prince William Sound, the tip of the Kenai Peninsula, the Kodiak Island archipelago, and the Aleutian Islands. Aleutian Island sites with sea lion remains date to 3,000 years b.p. - before the present - (Anangula Island) and 4,000 years b.p. (Chaluka Village). Sea lions appeared to be the principal sea mammal in the latter site, comprising some 10 to 20 percent of all sea mammal bones found.

From four well-preserved sites on southwest Umnak Island in the eastern Aleutians, about 70 per cent of the archaeological biomass (meat weight) was represented by sea lions. The Lower Alaska Peninsula and the Sanak Island projects have generated data over 12 field seasons, documenting 300 ancient village sites spanning the last 6,000 years. Nearly 100,000 marine mammal, bird and fish bones have been collected. Archaeological sites have also been found on Marmot Island, home to Alaska’s largest Steller sea lion rookery.

Long-term changes in the North Pacific and Bering Sea ecosystems have been the subject of scientific investigations relying on archaeological and anthropological analyses. Data indicate that there have been significant variations in the distribution of key species over the last 5,000 years. During cooler periods the harvests of sea lions appears to have been greater than during warmer periods. Archaeological evidence from the Medieval Warm Period, 900 to 700 years ago, includes very few samples of sea lion remains. After 1400 a.d., well into the Little Ice Age, evidence indicates that harvests rose to levels not seen in the previous 4,000 years.

Anthropologists have estimated that the approximately 25,000 Aleut living in the region 400 years ago probably required between 5,000 and 10,000 Steller sea lions per year to meet basic subsistence needs. Other estimates more than double that number.

Sea lion hunting occurred between the middle of September and November, after the fur seals left the rookeries for the season. Hunting was done on the rocks at night by moonlight, and selected animals were captured and herded into corrals. After several nights of corralling, two or three hundred animals were driven or herded overland by the hunters. Herding the animals could take from five days to three weeks. The sea lions were driven to a village before hunters killed them with sticks and spears. 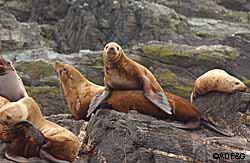 A Steller sea lion pup and mother and a haulout in Southeast Alaska.

Ivan Veniaminov, the Russian Orthodox missionary wrote of Pribilof Islanders in the 1830s harvesting as many as 2,000 Steller sea lions on St. George Island alone.

The Russian word, baidarka, referred to the Aleut’s distinctively hatched, decked, skin boats. At the time of European contact, one and to a lesser extent, two hole baidarkas were common, the three hole boat was likely developed by the Russians. Sea lion skins from sub-adult males were the preferred baidarka covering. A single hatch baidarka required four to six sea lion skins which were replaced three to four times per year.

Although the Aleut population dropped significantly following the Russian invasion, the need for baidarkas in the sea otter industry kept the numbers of boats and sea lion skins high. Russian sea otter hunting expeditions required several hundred baidarkas, expeditions with 600 to 800 boats are mentioned in the literature.

According to George Dyson, baidarka builder and scholar, “Baidarkas were being built by the thousands in the Russian-American colonies for close to 100 years.” These skin boats were the key to Russian activity during the entire pre-American period. Almost anywhere they went, hunting, trading, or exploring, the Russians depended on the baidarka. Following the 1867 purchase of Alaska, the Americans took over the sea otter trade, which still required deck loads of baidarkas.

By the late 19th century the marine mammal populations in the Gulf of Alaska and Bering Sea had collapsed. Petroff, collecting data for the 1880 US census described much smaller sea otter hunting parties consisting of “from 4 to 20 (two-hatch) baidarkas.”
The collapse of the Steller sea lion populations in the late 19th century were so serious that the United States Government imported sea lion skins from California to Alaska so baidarka construction could continue.

Waldemar Jochelson, an ethnographer working in the Aleutians during 1909-1910 commented on the scarcity of marine mammals and skin boats, “The Atka Aleut still use skin-boats. . . but the Attu Aleut have no skins to cover their boats. . . .” Wooden skiffs had now taken the place of skin boats.

In 1910 the last sea otter hunt was conducted in 12 two-hatch baidarkas. Due to the economic depression and costs for fuel baidarkas saw a brief revival in the 1930s. In 1933 the anthropologist, Birket-Smith described construction of baidarkas, “Six large skins of spotted seal were necessary [single hole baidarka], for a two-hole baidarka, nine, and for a three-hole twelve skins. Skin of young sea lions might also be used . . .”