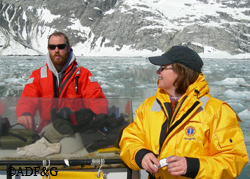 John Wells operates the boat while Shawna Karpovich takes pictures on a seal capture and research trip in Glacier Bay. Wells said they watched a Steller sea lion eat a harbor seal on this trip.

GAIL BLUNDELL is the leader of the harbor seal program and serves as the principle investigator. She’s based at ADF&G’s Region 1 (Southeast Alaska) office in Douglas. Blundell graduated from the University of Alaska Fairbanks with her PhD in wildlife biology, and did graduate work on coastal river otters in Prince William Sound.

Blundell is an avid scuba diver, which proves useful at work. When she’s not underwater she may be airborne, she is one of Juneau’s cadre of paragliders. She plays hockey in the winter. Her work demands a lot of time in the field in the summer, flying surveys, capturing and tagging seals, and taking a full suite of biological samples to learn about the seals’ diet and condition.

CHRISTINE SCHMALE (pronounced Shmaw-lee) is the most recent addition to the program, and she is also based in Douglas. “She’s our GIS expert,” Blundell said. Schmale uses Geographic Information System (GIS) technology to create maps detailing the locations of the seals over time.

In addition to mapping and helping with aerial surveys, seal captures and tagging, she helps with logistics, planning, administration and writing.

SHAWNA KARPOVICH lives in Fairbanks, where she studied wildlife biology at the University of Alaska. Her specialty is physiology, which she practices in the lab on the UAF campus, and in the field.

Karpovich has two small kids and a husband who also works for Fish and Game. She’s also a hockey player.

GREY PENDLETON works out of the Region 1 office in Douglas and lives in Juneau. As a biometrician – a biologist specializing in statistics – Pendleton advises researchers on their study design and helps with the analysis of data. 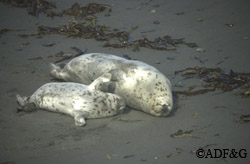 A seal mother and pup on Tugidak Island, the site of an important, ongoing seal monitoring project.

Blundell said he helps make sense of all the data. “I come to him with big questions, and he gets down to the nuts and bolts,” Blundell said.

His work isn’t all indoors, as Pendleton also conducts aerial surveys, flying over haulouts and beaches observing, documenting and taking pictures of seals. He does similar work with the Steller sea lion program, and also contributes to a number of other projects in Southeast Alaska.

JOHN WELLS is based in Anchorage. He runs the logistical aspects of the program, orders supplies and packs for field trips, maintains shore-based telemetry monitoring equipment, conducts telemetry tracking, and oversees the safety issues for the program.

"I do most of the logistics for the program," he said, which includes boat mechanics. "If I can't do it, I make sure it gets done."

Wells enjoys working outdoors and planning and executing field operations. One summer he did stream analysis projects along the Alyseka pipeline, sampling fish using a backpack electrofisher. He worked with bears near Wolverine Creek, and served as a ranger for Alaska State Parks on Shuyak Island north of Kodiak.

Wells is a runner, and last year competed in the Susitna 100, a winter race that entails pulling a sled for 100 miles at 20-below. He also ice climbs and rock climbs.

TOM GAGE and SUE GOODGLICK work from May through September monitoring the birth rate and survival of seal pups at Tugidak Island, south of Kodiak Island. High bluffs above the beaches permit researchers to view and photograph seals without disturbing them. 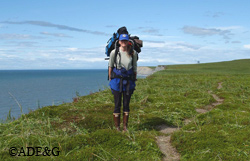 Kelly Hastings with a fully loaded pack on Tugidak Island. High bluffs above the beaches allow researchers to monitor and study seals undisturbed.

Gage and Goodglick observe and take thousands of photographs of mother seals and pups during the molt and pupping season. Photos allow researchers to positively identify individual animals, and track them over time.

Hastings lives in Haines and works for both the harbor seal and the Steller sea lion program. She earned her masters degree in wildlife biology from the University of Alaska, Fairbanks, and spent time in Antarctica studying Weddell seals. She said that growing up in Southern California, she wanted to study marine mammals, especially seals and sea lions.

“I’ve always been fascinated by seals and sea lions,” she said. “They aren’t the easiest animals to study. They’re kind of inaccessible, they’re underwater most of their lives, but that’s kind of the appeal too - the way they exploit the ocean, and how at home they are in the water.

Riley Woodford is the editor of Alaska Fish and Wildlife News and also produces the Sounds Wild radio program. He may be reached at riley.woodford@alaska.gov