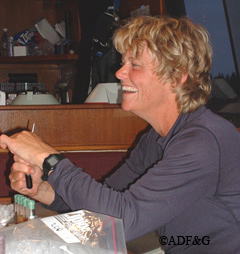 In the 1960s, more than 15,000 harbor seals could be seen hauled out on the beaches of Tugidak Island, south of Kodiak. Today, fewer than 1,000 can be counted. Harbor seal numbers have declined in many parts of Alaska, and biologists with the harbor seal research program at the Alaska Department of Fish and Game want to know why.

Researchers hope to answer key questions. Why are numbers declining in some areas and increasing in others? How does their diet and behavior compare in different places? What contributes to their health and reproductive success – or failure?

“What we’re trying to figure out is if the number of seals is going up or down, and why,” said biologist Bob Small. “We’re trying to collect the information that’s needed to develop strategies for conservation and management.”

ADF&G’s harbor seal researchers work cooperatively with NOAA Fisheries, the National Park Service, and a host of other agencies, and share their expertise with the department’s Steller Sea lion program and other projects.

Seal captures involves putting transmitters on seals, and taking blood, hair, blubber, whisker and skin samples – which are shared with a variety of research partners. These samples provide information about the health, age, condition, diet, reproductive status, genetics and relatedness between populations.

Researcher Gail Blundell is overseeing the development of a new project for the upcoming season. “We’re starting work in Tracy and Endicott arm next summer – there’s lots of vessel traffic there and it’s an important pupping site.” Concerns have recently been raised regarding how the vessels may disturb the seals and subsequently, the possibility of population level impacts. 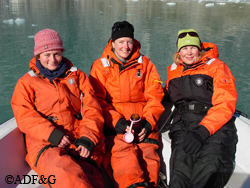 From left to right: Natalie Bool, Suzanne Conlon, and Christine Schmale, waiting to transfer captured seals in Johns Hopkins Inlet. Natalie was a volunteer with the Park Service this summer and helped study vessel interactions with harbor seals in Johns Hopkins Inlet. Suzanne was employed by the Alaska SeaLife Center in Seward and has been on many capture trips with the Fish and Game research team.

Fjords such as Tracy Arm are important for harbor seals. Many harbor seals migrate seasonally to the face of glaciers in Alaska to have their pups. The ice floes provide floating platforms for the nursing mother seals and their pups, and offer two big advantages over hauling out on shore. Land-based haulouts can leave seals vulnerable to terrestrial predators, and often submerge at high tide. Seals that can safely float on ice for the three-week nursing period can nurse uninterrupted and better attend to their pups.

This spring researcher Shawna Karpovich put heart rate monitors on six seals in Glacier Bay. These animals are also equipped with devices that record how deep they dive, and the information can be correlated. Heart rate is an indicator of metabolic rate, and provides insight into seals' daily energy use.

The instruments help in comparing seals in one area to those in another. “Maybe a group of seals has a richer diet, but they have to work a lot harder to get it,” she said. “Or populations with lots of boat traffic in an area – does average daily heart rate increase because of boat traffic, incurring greater energetic cost?”

Karpovich also looks closely at the body condition of seals. She calculates the percent of body fat in a seal, and this can be compared between different groups as an indicator of health.

Some of the theories for the decreasing populations include disease, and animals with a chronic disease would likely be less fat. A changing diet may also be a cause for the decrease in numbers in some areas. A shift in the type or amount of fish they eat could reduce their reproductive success and overall condition, making them potentially vulnerable to other factors that could reduce their survival. “It’s interesting to compare over time and across seasons,” she said. 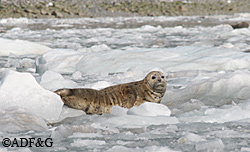 Many harbor seals move into fjords in Alaska to have their pups. The ice floes provide floating platforms for the nursing seals.

She is also looking at blubber. In some ways, animals really are what they eat. A lot of fatty acids are stored by the seal unchanged, she said. You can get an idea of diet of the predator, and compare the diets of different populations.

Tugidak (pronounced Ta-geed-ick) Island has historically been one of the largest concentrations of harbor seals in Alaska - and in the world - and is the site where significant population declines were first documented. Numbers have increased a bit over past ten years or so, but are still much reduced from historical numbers.

Biologists have conducted seal research there since the 1970s. High bluffs above the beaches permit researchers to view and photograph seals without disturbing them.

This year marks the seventh season for the harbor seal program’s photo ID project. Researchers Tom Gage and Sue Goodglick observe and take thousands of photographs of mother seals and pups during the molt and pupping season. Photos allow researchers to positively identify individual animals, and track them over time.

Ten years ago, Bob Small and his colleagues worked to develop photo-identification techniques for seals. Since then, harbor seal researcher Kelly Hastings has made tremendous progress on the technique.

Seals can be uniquely identified by their appearance and markings. Their spotted coats are distinct and individual, and recognizable. Between 1997 and 2002, 150 seals were tagged as pups, and the animals have been closely monitored.

“Do they survive? How many pups are they having? You have to know the individual over time,” Hastings said. “Their natural markings are complex enough that you can use those”

See part 2 to learn about the people on the team.