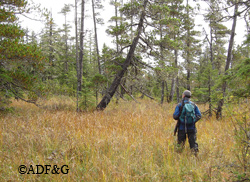 Doe season opened in mid-September across Southeast Alaska, and wildlife biologists are keeping an especially sharp eye on deer this fall.

Cold weather and big snow storms last November and March took a toll on deer in parts of Southeast Alaska – especially northern Southeast. This summer, wildlife managers assessed the situation and before buck season opened in August, they talked about the possible need to curtail hunting this season.

“We know we had a fair bit of winter mortality in some areas,” said biologist Neil Barten of the Alaska Department of Fish and Game. “If we were going to change some aspect of the season, it would be to protect the does.”

The mainland hunt is always bucks only, but beginning Sept. 15 “antlerless deer” (does and young bucks) may be taken as well as bucks on Douglas Island, and on Admiralty, Baranof and Chichagof Islands, commonly referred to as the ABC islands. These are the areas most popular with hunters in the region.

“Do we need to sacrifice one year of hunting to allow the herd to rebound for better harvest for upcoming years? Or can we allow the season to continue as is and be confident the deer population will be okay?” Barten said. “Just one bad winter after a number of easy ones, we think the population can rebound.”

The situation is not consistent across the region. Parts of Southeast saw much less snow than others. The condition of the habitat, and the numbers of predators such as bears and wolves, also varies tremendously. Deer on Admiralty Island, for example, live in a significantly different system than deer on Prince of Wales.

One bad winter doesn’t mean the population has dropped to unsustainable levels. Looking at northern Southeast specifically, Barten said with the relative lack of predators such as wolves, deer populations can rebound quickly. Given a mild winter this coming season, deer should come back in a few years. “It’s consecutive, back-to-back hard winters that are hard on deer, and that’s the situation you really have to look at as managers.”

“We’ll be keeping an eye on the fall and early winter weather conditions, and if we get a lot of snow early on, we’ll reconvene and discuss the need to curb the harvest to prevent over harvest of the population.”

Barten said he did not think it was necessary to pre-emptively close the season or restrict the harvest.

“I don’t think enough does are harvested during the first few weeks of doe season to make that a drop dead date to curtail the hunt early on,” he said. “The deer are really scattered in September. There are still leaves on the shrubs and the deer are hard to find. But in late October, once the deer start moving down in elevation and become more active during the rut, they’re more vulnerable to hunters. People can call them in, and that’s when the harvest really starts to have an impact. That’s when you have to worry about the does, if it’s an issue.” 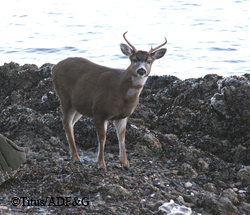 A Sitka black-tailed buck on the beach on Glass Peninsula on Admiralty Island in November. Cold weather in November taxed deer, and deep snow in March further stressed the population in northern Southeast. Kim Titus Photo

Possible action could include limiting the doe harvest or closing it entirely on Douglas Island, and on northern Admiralty and Chichagof Islands.

CARRYING CAPACITY: DEER ON THE EDGE

“The last three or four years we were carrying a lot of deer on the range,” Barten said. “The numbers were so high, I know it looks like a real drastic change – they were near the carrying capacity of the range in a lot of places. It’s not really where you want to be with populations, because then they’re using all the available forage and they’re more vulnerable to major die-offs from severe weather.”

When deer are at or over the carrying capacity of the range, they can seriously impact their habitat. Dave Person, a Ketchikan-based state wildlife biologist, said there is an important balance between moderate and over browsing.

“When a population is over carrying capacity, they can over browse and damage their winter forage,” Person said. “It’s like pruning. You get more growth with a little cutting back, but too much and you damage the plant and its ability to produce the following year.”

Barten said deer density is kept relatively low on Douglas Island by hunters, providing a more resilient deer population. “With this lower density, we expect the deer to be more resistant to a severe winter because they’re not competing with each other so severely for the available forage.”

Person said that’s quite evident in southern Southeast, where there are fewer deer per square mile than on the ABC islands. “The deer on Prince of Wales Island are fatter and bigger; they go into these winters in such good condition,” he said. “They have a much greater potential to survive and produce offspring.”

If deer are pushing the carrying capacity of the habitat and compromising the vegetation, then a die-off one winter may not be alarming to wildlife managers.

Biologist Phil Mooney manages deer on the ABC islands. More deer are harvested in this area, Game Management Unit 4, than any other part of Southeast. The annual harvest ranges from 8,000 to 9,000 deer, but last year it was even higher.

“Last year it probably jumped up to about 12,000,” Mooney said. Higher-than-average numbers of deer were harvested off the beaches in November because of the heavy snowfall and cold weather.

The March storms and the persistence of snow into late spring would almost certainly have doomed those deer that were already struggling in November, Mooney said.

By all indications, deer numbers currently are down in Unit 4. He estimates that 50 to 60 percent of the fawns died over the winter.

Mooney said deer pellet surveys indicate there are fewer deer, as much as a 30 to 35 percent decrease in areas of west Chichagof. 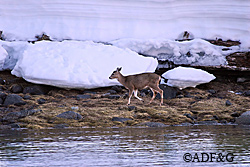 Some areas were harder hit than others. “North Chichagof, from Lisianski Inlet to west Port Frederick, was really hit by the March storms,” Mooney said, “and on down to Ushk Bay. There was 122 inches of snow on the beach in Tenakee Inlet in April. The south end of Baranof (Island) got hit hard as well, with record amounts of snowfall recorded on the docks at Port Alexander, Little Port Walter all the way up to Baranof Warm Springs.”

Mooney said all things considered, he doesn’t think the outlook is gloomy. The population was likely at the carrying capacity of the habitat, he said, based on evidence of heavy browsing occurring since 2004.

Mild winters in past years contributed to that, and also the way people hunt.

Mooney estimates from hunter surveys and contact with hunters that about 85 percent of Unit 4 hunts target the beach and coast fringe. “Some folks do alpine hunts, but the bulk of the harvest happens close to the shoreline, that’s why a lot of the locals wait until November. So a lot of the interior parts of the islands don’t get hunted nearly as hard as the shoreline.”

Mild winters in past years meant that deer were able to spend the winter at higher elevations and were not restricted to sea-level habitat, as they are in deep snow years. Mooney said a few years ago, when deer numbers were very high and winters were mild, he had hunters coming in and asking, “Where are the deer?”

Mooney saw that plants at higher elevation showed signs of heavy browsing. Deer were targeting not only good, palatable species like blueberry, but less digestible species like rusty menziesia which is not a good sign.

“When you have larger populations, you push deer into marginal habitat,” he said. “Then when winter comes, those deer in the fringe areas have a more difficult time surviving. They were really pushing the carrying capacity of the range.”

If concerned hunters want to take an active stand, Mooney suggests they don’t shoot does. “If you kill a doe after November 15 – she’s probably pregnant,” he said. “Shoot bucks and fawns. Don’t shoot does. That can help.”

Mooney is gathering more information – he’s asking goat hunters about the deer they see at high elevations, and he’s talking with pilots and air taxi operators about their observations. He’s talked to early season hunters who tell him they are seeing lots of deer.

“The alpine bucks that I’ve seen come in look great, there’s more than an inch of fat on the rumps,” he said.

“Weather related die-offs are common in the wildlife world,” Mooney said. “Animal populations build up in good years, and then Mother Nature comes in and levels the playing field. One bad year is not as significant as a few, back to back. That’s what we’ll be watching for.”

Riley Woodford is the editor of Alaska Fish and Wildlife News and produces the “Sounds Wild” radio program for the Alaska Department of Fish and Game.