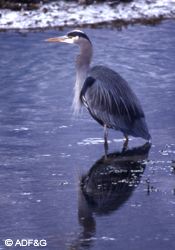 On a winter morning, a great blue heron stalked the tidal flats at the mouth of Gold Creek in Southeast Alaska. Wading carefully, the tall bird didn't make a single ripple in the shallow water. It paused, then plunged its dagger-like bill underwater and pulled out a wriggling fish.

While many birds leave Alaska in the fall, some great blue herons stick around, wintering in Southeast and fishing the wetlands and shorelines. Alaskans know the great blue heron as a superb fish catcher, but farmers in the lower 48 watch herons hunting mice and gophers in open fields, applying their careful stalking and lighting strike to catch small mammals.

The great blue heron is found across the United States. An almost pure white color morph lives in Florida, but the blue-gray birds are familiar to folks from New England to Oregon. Their range extends in a strip up the West Coast to South-Central Alaska.

In northern, western and interior Alaska, the tall, long-legged, long-necked bird most commonly seen is the sandhill crane, not the great blue heron. These cranes pass through Southeast on their fall and spring migrations. It's easy to tell the birds apart in flight - cranes fly with their necks straight out, and the heron folds its neck up in an S curve between its shoulders.

Herons are big birds, but they're lightweights. Standing about three-and-a-half-feet tall, with a six-foot wingspan, a grown heron weighs just about six pounds.

Herons form pair bonds in April, after performing an elaborate series of courtship displays. Nesting pairs tend to group together in colonies, and in the summer while they are caring for their young they can be seen making regular trips back and forth between their hunting grounds and the rookeries.

In recent years, several pairs of herons nested at the tops of tall spruce trees near Cope Park in downtown Juneau. Herons are territorial birds and defend their nesting and feeding areas, so you're likely to see the same birds in the same places day after day. Herons will use the same nest sites year after year, and chances are good that next summer, the birds will be back.