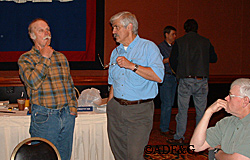 Ben Grussendorf, left, considers a question during a break at an Alaska Board of Game meeting.

Ben Grussendorf is a longtime member of the Alaska Board of Game, the state authority that passes regulations regarding Alaska's wildlife resources. Members of the public petition the board to create or change regulations affecting hunting, trapping and other aspects of wildlife management and allocation in Alaska. The Board of Game generally meets two or three times a year in different parts of the state. The board has seven members, each appointed by the governor for a three year term. Each member must be confirmed by a joint session of the state legislature.

Ben Grussendorf is one of three board members to have been appointed by three different governors since the Board of Game was created in 1975, following members Sidney Huntington and Richard Burley. Ben was first appointed to the Board of Game in 2001; his term is set to expire in March 2010.

Ben has a long history of government service in the State of Alaska. He dedicated 20 years to the State House of Representatives, serving in various capacities including Speaker of the House for six of those years. Prior to his work with the legislature, he served as assemblyman and the Mayor of the City and Borough of Sitka. Ben has also been a dedicated teacher of government/social sciences at the Sitka High School and Community College.

Wildlife management in Alaska has changed much since Ben moved to Alaska in 1967 with his wife Karen from Grand Rapids Minnesota, near the headwaters of the Mississippi. Ben became know as the resident wildlife expert of the Alaska State Legislature during his tenure there and is perpetually infatuated with the great outdoors.

I sat down with Ben to find out a little more about him.

Why/When did you move to Alaska?
In Minnesota I did a lot of hunting and fishing and I felt that Alaska would be ten times what I had in Minnesota. Sad to say it is was only five times as good. When I was in fifth grade there was a family that had come back from working on the Alaska Highway, and that’s when I first became interested. Then in 1967 I moved up here.

Tell us a little about your family.
I’ve been married to my wife Karen, who I met in college, over 40-some years now, and I have a boy Tim in Juneau, and a daughter near Sacramento, Karla, and I always have a couple hounds. I have had a total of six German shepherds over my span here, and I train them for the woods.

What does “training them for the woods mean?”
They are trained so I can look at them and I can tell what kind of animal is up there. They go 15 yards ahead, and I can tell if it’s a bear, a mink, or a human being just by looking at the dogs. The important part is that they won’t go running off after any animal in the woods.

When did you first become aware of the Board of Game?
I have always been interested in fish and game issues. When I was in Minnesota I lived next to a state game warden and a federal game warden was on the other side, and I thought, ‘Boy, that’s a great life,’ but I guess I became aware of it when I was in the legislative body. I was on the house finance committee, and the 10 years I was there I was always on the fish and game budget subcommittee.

When did you first decide to try to become a board member?
There was a Governor (Tony Knowles) that asked me to, and I declined, and then he kept asking, and then I thought ‘Well, why not?’

I was interested in it, very much so. A lot of the legislation I had was tied in with fish
and game. I always had a pet bill (piece of legislation) or two dealing with fish and game and that’s why they were after me, they knew my interests. In the legislative body, when someone had a question relating to wildlife they invariably came to me to talk about it.

What do you see as the role of the Board of Game?
The Board of Game looks at what the public concerns are and work with the advisory committees, and our function is not necessarily to be terribly proactive in things. Look at proposals as they come from individuals and organizations and decide if the proposals are workable. It is great to be on a board where you are dealing with people that are very interested in fish and game and like to talk about it and listen to the issues. They’re basically darn good people to be around.

What attracted you to serving on the Board of Game?
I was known in the legislative body by my colleagues as being knowledgeable to the point that the administration felt I understood what the issues were and the critter that we’re talking about. The administration thought it would be a good place for me. I said no three times, but then I thought ‘What else am I going to do?’ Heck, already I spend at least six hours a day in the woods, and that’s on a bad day. 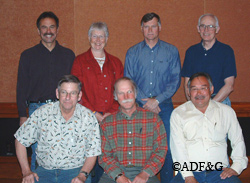 Ben Grussendorf, center front, with other members of the Alaska Board of Game.

What keeps you coming back?
What I would like to believe, and it is not necessarily so, is that the people I work with can see that I’m interested and that I understand the issues, and see that I contribute something. That’s what I would like to believe. Sometimes I may object to a particular thing and often times others will see there is problem. I like to make sure all sides of the issue are covered. Often I will purposely say something counter, just to get a reaction.

What has been the most interesting issue you recall working through?
Oh boy. Well I would say that what concerns me most to date is the status of our caribou herds: Nelchina and Mulchatna and the other herds. I am very concerned about the caribou issue: everything from habitat, to disease, to over harvest of bulls. It is an issue we are going to have to really come to grips with soon. Inevitably there is going to be a crash of one of the herds.

I would say the most interesting is probably the predator control programs we have instituted. I have been cautious in relation to that. I do agree with the five predator control areas that we have, however I would have to think twice and biologically be convinced that it should go to other areas. Predator control has been a major issue.

Subsistence has always been fascinating as well because of the dual management issues we have between the federal government and the State of Alaska. Subsistence and dual management is also one that greatly concerns me however we seem to be hand in hand on most of the issues.

Which issues have posed the greatest challenges?
Without a doubt the greatest challenge has been subsistence. I felt we should have submitted to the voters the constitutional question on subsistence and attempted to get rid of this dual management scheme that we have. There are others that didn’t want to have a constitutional amendment on it and wanted to go change ANILCA, and boy if they open up that in Congress you would have a mess. I would say there are two schools of thought but the constitutional amendment- I think it is gone from us. I think we are stuck with dual management and we have to make due with that and make sure we have good relations with the Federal Subsistence Board and deal with the federal agencies. That’s the toughest issue.

Caribou, that is my personal concern, which, I think, is shared by other board members. As for predator control, as long as we keep using the best science we have and we are able to biologically rationalize why we are doing things we are all right. Of course, at the same time you cannot completely blame the declines on predators.

What has been the board’s greatest accomplishment during your tenure?
The ability to work together and move from issue to issue, even though we may disagree, without carrying it over to another issue. As the board works with the public, in some cases the majority of the board agrees and sometimes they don’t. I think it’s the process, it is just a real good process. I think the people don’t get too tied up on those one or two issues. Just like legislative body, you may have a colleague across the aisle and you may fight tooth and nail on one issue but on the next issue you will need to work together. The ability of the board to work together is really important, and I have never seen any major tension. Now, I’ve seen people angry, but the next issue they’re up and running, doing what they think is the best for the state.

If you could change one thing about the Board of Game, what would it be?
Nothing comes to mind. It really is a functioning board, it works and we get along. Every person that I’ve served with, well, I wouldn’t mind having at my campfire one evening for some coffee. Now, the only thing that we did do on the board that I really didn’t like was the sale of brown bear hides and claws. Other than that you can understand where everybody is coming from. All the others I understood, but the sale of bear hides, that one galls me. I think we will see more problems in regards to subsistence with brown bears because of that.

Secret of getting through a 12 day meeting?
Because of serving in the legislative body where I have gone around the clock for several days, I find my strength in seeing someone more tired and beat up than I am. When I was Speaker of the House, I once stayed up for seventy-two hours. The sessions don’t bother me. When you are nailed in on the subject of fish and game and not jumping around from insurance questions over to mineral exploration over to employee benefits, it’s a lot easier. The public testimony is what I really enjoy. Listening to the different perspectives and anecdotal information about what is happening out there. It’s really great listening to these people who have been out there hunting or trapping for 40 years, or just trying to seek/make a living out in some of these remote places.

What things do you hope to see the board address in the upcoming board cycles?
The caribou herds. Without a doubt that is going to be one of our major issues over the next few years.

Scott Crass works for the Boards Support Division at the Alaska Department of Fish and Game.