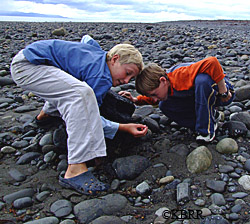 Suddenly, 9-year-old Hunter yells to his 11-year-old older brother Clem to come look at a couple of crabs he found under a log. Hunter didn’t recognize the crabs as anything that he or Clem had seen on the beach before. One of his first questions to Clem was, “Do you think they might be green crab?” Clem, a fourth grader at West Homer Elementary the past school year, had just learned about the European green crab as part of his classes’ role as community monitors in Kachemak Bay. Immediately, Clem began looking for key identifying characteristics to see if he and Hunter had found what everyone hopes will not be found in Alaska, the European green crab.

Today, the term “invasive species” is becoming an all-too-familiar subject during discussions of threats to Alaska natural resources. Invasive species includes plants and animals. Names such as purple loosestrife, Atlantic salmon, New Zealand mud snail and European green crab have entered into the vocabulary of Alaskans of all ages.

Alaska, as we all know, is a land of tremendous size. Improvements in mapping technologies have recently measured our coastline at approximately 44,000 miles long – over half the entire nations’ coastline. This immense area brings tremendous challenges when resource managers are faced with the task of monitoring for invasive species, and in particular those species that are making their way toward Alaska via the ocean. In cooperation with several agencies and organizations, the Alaska Department of Fish and Game’s Kachemak Bay Research Reserve (KBRR) in Homer has developed and tested tools that will allow residents throughout coastal Alaska to assist in the monitoring and detection of non-indigenous aquatic species; in particular the European green crab (Carcinus maenas).

Over the past few years, staff from the Prince William Sound Regional Citizens Advisory Council in Valdez and KBRR have developed protocols for community monitors to use as they trap and track crab populations in areas where the probabilities of invasion and detecting the alien European green crab are high. Presently the green crab has not been documented north of Vancouver Island, British Columbia, but the threat of the crab moving north to Alaska drives the need for all Alaskans to be vigilant lookouts for these crabs. Green crabs can move north to Alaska through the release of ballast water from ships, via ocean currents carrying the planktonic larval crabs, as fouling (encrustation) on ships and vessels, or unintentionally by human activities. 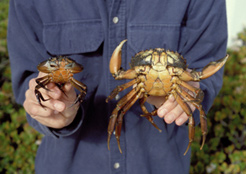 The design of the community monitoring program encourages Alaskans of all ages to participate. Last year, a fourth grade classroom in Homer taught by Carole Demers volunteered to test the trapping protocols and ability of her students to successfully carry out a series of trapping events. By all accounts, it was a huge success.

“This is such a cool program!” Demers said. When describing how the monitoring program works in her classroom Demers said, “It gives kids the opportunity to be involved in hands-on science. The kids learn how to identify and handle crabs, how to use scientific equipment, and how to work in teams. It’s just a great program at all levels.”

Demers is quick to point out that she has received a huge amount of support from a number of parent helpers who make the program work. Greg Demers, Carole’s husband, has also been invaluable to her and the student monitors.

“The protocols for the monthly trapping call for us to set the traps one day and then go back the next day to see what species of crabs we’ve got in the traps,” Demers said. This schedule has proven difficult for her students to accomplish due to the time demands. Greg, a retired Fish and Game employee, has been setting the traps the day before Carole takes her students to the beach to investigate what species have been trapped over the past 24 hours.

Months after seeing her students leave her fourth grade classroom for their summer vacation Demers is still impressed and proud of their enthusiasm and quest for science knowledge. She tells of the day that two of her students attended a marine science symposium in Homer and staffed a table display to tell about their community monitoring project. Throughout the event the two boys were able to effectively interact with symposium attendees, fielding all questions with confidence and poise. For Demers, her reward for teaching comes by watching her students’ passion for science and the natural world grow throughout the year. And as you might expect, she feels rewarded each year. 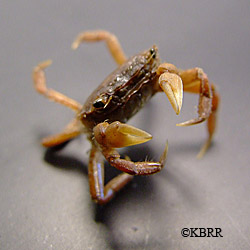 Yellow shore crab shorecrab (Hemigrapsus oregonensis) collected by Clem and Hunter Tillion in Halibut Cove, Alaska. This small crab, carapace approx. 1/3 in., had not been documented in Kachemak Bay prior to this discovery. Terry Thompson photo

Clem and Hunter exude a contagious excitement when they talk about the crabs they found in Halibut Cove. Their curiosity and desire to know more about their unidentified crabs led them to seek more information. Over the next day they carefully cared for the crabs – constantly changing the water to ensure they would stay alive until they could take them across the bay to be identified by staff at the Research Reserve. Once at the Reserve, the crabs were given to Carmen Field and Catie Bursch, both of whom have worked with Clem and his classmates, teaching them about Alaska’s crabs. Clem and Hunter’s crabs proved to be a major surprise.

No, they didn’t find the first European green crab in Alaska – (luckily!) But, they were the first to document the presence of a new species of crab in Kachemak Bay, the yellow shorecrab (Hemigrapsus oregonensis). While common in many parts of Alaska, this discovery now documents a range extension of the yellow shore crab into Kachemak Bay waters, which is an amazing find, and one that happened because two young boys were able to take the knowledge that one learned in his fourth grade class, and who then passed on that knowledge to his younger brother. Together they have done something that many scientists only hope do in their scientific careers. Carole Demers just smiles as the story is recounted. To her, it’s another rewarding day.

If you would like to become involved in a community monitoring program for the European Green Crab contact the Kachemak Bay Research Reserve at 907.235.4799.

Terry Thompson is the education coordinator for the Kachemak Bay Research Reserve in Homer, Alaska.