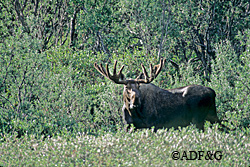 Kachemak Moose Habitat Inc., a nonprofit established in 1996, has preserved more than 630 acres of moose habitat on the Southern Kenai Peninsula. ADF&G photo.

“The purpose of the group is to promote conservation of moose through land acquisition and habitat enhancement,” said Joe Meehan, coordinator for Fish and Game’s lands and refuges program.

The nonprofit was set up as a requirement of the hydroelectric project’s licensing process, and endowed with land plus $186,000 to buy additional acreage to benefit moose. So far, the small nonprofit has preserved more than 630 acres of moose habitat on the Southern Kenai Peninsula, according to Kachemak Moose Habitat chairman and founding member Lynn Whitmore.

Not much happened at first. The money was invested and grew substantially, helped recently by a $50,000 grant from the U.S. Fish and Wildlife Service, Meehan said.

Land purchases have stepped up in recent years, with a current emphasis on conserving land around Beluga Lake next to the Homer Airport Critical Habitat Area. This month, the group expects to close on about three acres at Beluga Lake.

The land is hard to come by because it’s prime Homer real estate, Whitmore said. But it is also key winter moose habitat.

During tough winters with deep snows, Homer-area moose congregate in the Beluga Lake wetlands near the airport to feed and rest, said Thomas McDonough, a Homer-based wildlife biologist with Fish and Game. According to Whitmore, the new parcel is not a prime feeding area but is a place where moose go “to get quiet time when they’re stressed.

“When things get really bad, this is where they come to,”Whitmore said.

If the Beluga Lake area was unavailable as a winter refuge for moose, late winter moose mortality rate would likely be significantly higher in deep snow years, McDonough said. The Homer area herd has been stable in recent years and is estimated at about 500 animals, he said.

Kachemak Moose Habitat Inc. is managed by a three-person board of directors. In addition to Whitmore and Meehan, the third member is Bryan Carey, an employee of the Alaska Energy Authority, the state-owned energy corporation that founded the nonprofit.

Whitmore, a former Fish and Game Advisory Committee chairman who has also spearheaded other Kenai Peninsula conservation efforts, has been a board member of Kachemak Moose Habitat Inc. since its inception. He said he became involved because he’s a moose hunter.

“Somebody has to do it,” he said. “You end up being a conservationist if you’re a hunter because you want to keep a sustainable yield. My feeling is that if everyone put back equal to what they take, there would be a lot more resources around. That’s what keeps me going.”

Besides focusing on small parcels in the Beluga Lake area, the nonprofit has bought land in various spots throughout the Southern Kenai Peninsula. One key parcel consists of 120 acres above the Homer bench between McLay Road and Skyline Drive out East End Road. The area is important as a wildlife corridor connecting uplands to low lands.

The trust has been a great help to the nonprofit, lending both expertise and administrative assistance, Whitmore said. The trust has assisted the group by placing a conservation easement on the 120-acre wildlife corridor, thereby ensuring that the land will be permanently protected as habitat and off-limits to development. The trust also wrote and is administering the U.S. Fish and Wildlife Service grant.

So far the nonprofit has retained ownership of all of the land it purchases. The lands owned by the nonprofit are private but open for public use, Meehan said.

Currently, the group has about $250,000 left in unobligated funds. That leaves it with about $65,000 for land purchases as the group does not want to spend below its initial endowment.
Lands purchased by the nonprofit to date may not make an immediate difference to the Homer herd, McDonough said. But it should ensure the herd’s survival in future years as Homer grows and open space becomes scarcer.

The open space is also valued by humans, Seaman and Meehan noted.

“Not only is this protecting moose habitat, it’s protecting open space as the city of Homer grows and develops,” Meehan said.