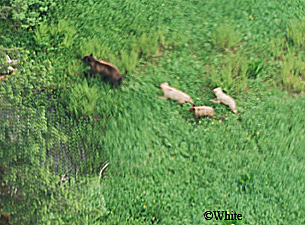 Kevin White photographed this mother brown bear with two light-colored cubs and a third more typically colored cub, north of Juneau. The distortion is caused by the plexiglass helicopter bubble.

The group of four bears included a sow and three cubs. One cub is distinctly more ‘normal’ looking. White guessed the cubs are all about a year old – probably born last spring.

White is not the only Alaskan to see a strange-looking bear this year. An almost white black bear has been roaming the Skagway area, and many wildlife biologists have their own stories about unusual-looking bears.

It’s ironic that bears are named by color, since black bears can be grey, cinnamon red or brown, and brown bears range from blonde to almost black. Grizzly bears are called brown bears in coastal Alaska. The term “grizzly” is also a reference to the bears’ appearance; the lighter-colored hairs that overlay the darker coat of the bear, giving it a grizzled (not grisly) look.

Fishery biologist Leon Shaul has spent decades working around rivers near where White saw the unusual bears. He said a blonde sow with snow white ears has frequented the area around their seasonal fish survey camp their since the early 1980s. She’s not a large (brown) bear, he said, but she's a top-notch fish catcher and a survivor. Shaul and his crews have watched her raise several sets of cubs over the years, some with pale coloration like those White saw, and others the more typical brown color.

Hair color – or coat color – is determined by genetics. Kris Hundertmark is a former Fish and Game biologist now serving as assistant professor of wildlife ecology at University of Alaska Fairbanks. He speculated that an unusual recessive gene could cause the white coloration. As a recessive gene, it would have to be present in both parents to be expressed in a cub. It’s possible that the gene could be present but not exhibited in the parent bears.

The chance of the gene being expressed is better in a population of bears that is isolated or contained, such as an island population. That could increase the chance of a bear mating with a related bear that also carries the gene.

As White pointed out, one of the cubs in the unusual bear family looks more typically brown. Like a litter of puppies, bear siblings may look different from one another. And like tow-headed children, blondes who turn brunette as they grow up, it’s possible the bears may change.

“I’ve heard that bears may change coat color before they become sexually mature, so it’s possible these bears might become darker or change color,” Hundertmark said. 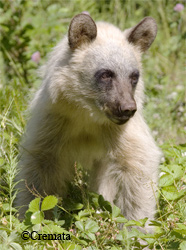 This light-colored black bear has been roaming the Skagway area since it was a cub. Photo courtesy Andrew Cremata

Fish and Game researcher LaVern Beier has seen several thousand bears over the past 30 years. He’s seen tremendous variation in bears’ coloration, including a number of light colored brown bears he characterized as blonde. Blonde bears frequently have darker legs, he said, and color variations are often regional.

“In the Interior, the Brooks Range, Nome, light-colored blondish bears are pretty common,” he said. Southeast Alaska also has light colored bears on some islands and not others. “There are blonde bears on Chichagof and Baranof, but it’s extremely rare to see a blonde bear on Admiralty Island.”

Glacier bears are black bears with a bluish-grey color. “If there was a glacier bear capital of the planet, it would be Yakutat,” Beier said. “There were glacier bear hunts that were marketed there. More recently, they’ve been seeing glacier bears around Juneau and Glacier Bay.”

The “glacier bear” distinction is a judgment call, and sometimes tan or light-colored black bears will be referred to as glacier bears, although they are not really bluish-grey.

Last year Beier was capturing and tagging bears in the same area where White saw his light-colored bears and caught an extremely blonde bear. “It was the largest light-colored male bear I’ve ever handled, from head to toe that bear was blonde” he said. “It was probably the father of those cubs.”

Beier makes it a point to photograph the bears he captures, and he’s handled and photographed at least 800 bears. He’s often surprised at how the photographs turn out. “Photography often makes them look much lighter, if it’s a little over-exposed,” he said. “Or if they’re dirty, or in the shade, they look darker than they are. You have to view pictures with caution.”

Fish and game biologist Steve Lewis has seen a wide variation in the color of brown bears along Lynn Canal between Juneau and Skagway. “Some are pretty blonde,” he said. He’s also seen grizzly bears so dark they resembled black bears, including one he helped capture this spring. “We had one that was so black we weren’t sure it wasn’t a black bear until we had it on the ground, although it certainly behaved like a brown bear.”

A white color phase of the black bear, called the Kermode bear, is found in western British Columbia. This white color phase is most common on Princess Royal and Gribbel islands, and accounts for about 10 percent of the bears. A litter of Kermode bears may also include black-colored bears. 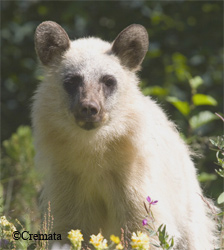 Glacier bears are black bears with a bluish-grey color, but this Skagway bear is even lighter than the usual glacier bear color. Andrew Cremata photo.

Sometimes the public takes a special interest in an unusual bear. In 2002, the state board of game took regulatory action to protect a white-colored black bear in the Juneau area. At this time, as a result of that 2002 incident, Alaska hunting regulations specify that a white colored bear may not be taken in Unit 1C (the Juneau area).

A light-colored black bear in the Skagway area has generated a lot of interest this summer, and members of that community approached the Alaska Board of Game about protecting the animal.

In August, the Board of Game passed an emergency regulation that prohibits hunters from taking white-colored black bears in Unit 1D. This regulation is in place for 120 days, and making the regulation permanent will be discussed at the board’s regularly scheduled Fall meeting.

This is unusual for wildlife managers, who are used to managing populations of animals, not individuals.

The area around Juneau seems to have an abundance of non-black black bears, said Juneau Area Biologist Neil Barten. He’s seen the bluish-grey glacier bears, brown black bears and one bear he described as red.

“It was the color of a golden retriever,” he said. “I got a good look at it several times.”

A black bear with a distinct stripe of longer, reddish-brown hair running the length of its back, like a Mohawk haircut, has been frequenting the viewing area at the Mendenhall Glacier Visitor Center this summer.

“It seems to me that the Juneau area has more color variety for black bears than other parts of Southeast Alaska,” Barten said. “Haines has some cinnamon bears, but mostly black. Kuiu (island), Petersburg, they are mostly all just black.”

Barten often sees bears when he’s conducting wildlife surveys from a small plane. A few years ago he flew over the open alpine country of the Chilkat Mountains, the range on the west side of Lynn Canal. “We flew a goat survey of the Chilkats from the Endicott River to Point Couverden, and saw 235 goats and 105 black bears. Every one of those bears was just all black. But right around Juneau, I’d say for every 10 black bears I see two that are off-color.”

Biologist Ryan Scott pointed out that the genes for white and other unusual colors may not present much advantage to the animals, otherwise they’d be expressed more often. White joked that the ‘super blonde’ brown bears he photographed may have a potential advantage pursuing one prey animal.

“Maybe they are destined to hunt mountain goats.”

Riley Woodford is the editor of Alaska Fish and Wildlife News and also produces the Sounds Wild radio program. He may be reached at riley.woodford@alaska.gov