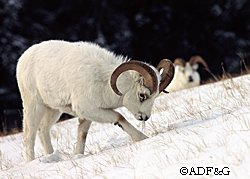 Last year, about 2,600 people hunted Dall sheep in Alaska (about 80 percent were residents) and 807 sheep were harvested.

Sheep hunters are providing wildlife biologists with a wealth of information about Alaska’s Dall sheep, thanks to a new method of permanently marking the horns.

The upcoming sheep hunting season, opening this month in most of the state, marks the second year for plugging sheep horns in Alaska. Last year, about 2,600 people hunted sheep in Alaska (about 80 percent were residents) and 807 sheep were harvested.

The Alaska Department of Fish and Game staff began using this method of marking or “sealing” sheep horns last year for sheep taken in areas with horn restrictions, which includes most of the state. When hunters bring a legal sheep to ADFG offices, horns are sealed by inserting an aluminum plug into the horn. This method of permanently marking sheep horns has already been adopted by all other agencies managing wild sheep in North America.

Becky Kellyhouse is a state wildlife biologist in Glennallen, and a sheep hunter as well. She’s delighted with the new system.

“The plugging gives us a wonderful opportunity to look at rams we would otherwise never get to handle, and get samples, measurements and data,” she said. “We also get to talk to sheep hunters one-on-one and get information from them about the habitat and the general condition of the sheep in their hunt area.”

The plug, developed by the Foundation for North American Wild Sheep (FNAWS) is an inch long and shaped like a nail, with a flat head 1/2 inch in diameter. It’s inserted into the horn by drilling a 1-inch deep hole with a countersink, so the head of the plug will be flush or slightly below the surface of the horn. Each plug has an individual identification number. The plug is placed into the sheep’s left horn, at approximately the two-o’clock position when viewed from the animals left side.

Sealing of Dall sheep horns began in Alaska in 2004 as a way to reduce the number of illegal Dall sheep taken. Before that, hunters filled out a harvest report, but the animals were not inspected or sealed.

During the first two years of the sealing program, ADFG sealed horns by placing a green (legal) or red (illegal) plastic locking tag through an existing hole in the sheep skull, or the tag was attached to the skull using a thin tie that was wrapped around the base of the horns.

Faulise said plugging is much better. The aluminum plug is tapped in with a rubber mallet. “It’s flush with the horn so it can’t be pried out,” she said.

Ray Lee is president of the Foundation for North American Wild Sheep, based in Wyoming. Lee said the group began promoting plugging in the mid 1980s, and supplies the plugs free of charge to the various agencies that manage sheep in North America. Generally about a year’s supply is provided to each agency at a time. That might be just a dozen for California, 100 for Arizona, and more than 800 for Alaska. FNAWS stamps the agency’s initials or a state ID on the plug, then each agency has its own system of identifying the individual animal. California adds the year, the hunt area designation and the permit number.

Alaska’s are designated with the letters AK and a number that identifies the individual animal. 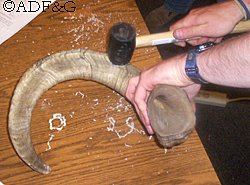 Using a mallet to insert a plug in a sheep horn.

Lee said the best thing about identifying sheep with plugs is that it requires direct contact between wildlife managers and hunters. “I used to run the wildlife program for Arizona,” Lee said, “I did the sheep plugging, and I was able to talk directly to the hunters. People would often bring in the whole animal. We got the most specific hunting data we ever could, far better than filling out a report card.”

Initially, that aspect of sealing raised some concerns with some department offices that deal with large numbers of sheep hunters at what is already one of the busiest times of the year. The plugging process and the interview with the hunter can take up to 30 minutes, which adds up to a lot of time in a state that seals 800 sheep a year.

Kellyhouse said the single largest benefit to plugging sheep horns is that hunters are now put under more scrutiny. “They now know their sheep horns will be checked by law enforcement and or biologists, and they are spending a lot more time making sure their ram is legal before they pull the trigger.”

She said prior to the sealing requirement, it was common to hear stories about hunters taking rams that were too small to be legal. “They didn’t have anyone to double check the legality of their rams, except maybe a taxidermist with a conscience. Many rams were shipped home with nonresidents, out-of-state, never to be seen again.”

Kellyhouse said in addition, measurements recorded are much more accurate now that Fish and Game and wildlife enforcement staff are doing the measurements. “Sheep hunters have been notorious for stretching the measurements as a status thing, and many really didn’t know how to age and/or measure their rams,” she said. “Base measurements were a very big source of error. Having a consistent group of people – and type of measuring tapes – measure and age rams will benefit the data quality in the long-run.

Another benefit to plugging sheep horns is tracking individual sheep, Kellyhouse said. Dall sheep are very unique and can only be hunted in Alaska and Canada. They are a sought-after trophy big game animal, and the horns are valuable to hunters as well as carvers and collectors. Now with permanent markings, it makes theft much more unlikely and difficult.

Kellyhouse said that Fish and Game is moving into a new phase of measuring rams for the Chugach Mountains, where the hunts will convert from general season to drawing this coming November. The Palmer and Glennallen offices will be taking detailed horn measurements, based on the model the Yukon has been using for 24 years.

“This will help us get a better handle on growth patterns (genetic and/or weather related) and differences between areas. We are also doing this for Wrangell Mountain sheep this year in our offices as well as the Tok office as a cooperative agreement with the USGS for a new study that’s being initiated in the Wrangell’s this year. We are taking genetic samples for those sheep as well. In addition to the horn shavings if plugged, we’ll be getting a small piece of flesh and/or hair which are proven mediums for genetic analysis. Much of that study is just to identify the baseline genetic diversity in the Wrangell Mountain Dall Sheep.”


Riley Woodford is the editor of Alaska Fish and Wildlife News and the producer of the "Sounds Wild" radio program.