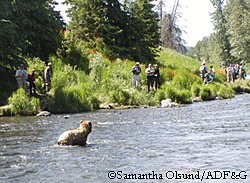 It was late at night in early July. We were fishing for king salmon on a fast, loud river and I couldn’t hear what my friend was yelling to me. I could only see her pointing upriver. I looked upstream to see a brown bear’s head bobbing as it swam across the river right at us. We had only seconds to react. The bear emerged from the river and ran towards us. We stood together, yelling and waving. The bear ran off and we stood on the riverbank wondering, what just happened?

Fishing in Alaska means fishing in bear country. Most of the places that you can bank fish are also accessible to bears. An angler should take a moment to think of bear awareness and how to respond to a close encounter before it happens.

Each week in the summer, we fish on the banks of many different streams, and almost every summer we’ve had to give up our fishing holes for the bears. I have yet to experience a summer fishing in Alaska and not encounter bears.

Just as we all have different levels of tolerance and individual personalities, so do the bears. Some bears are more tolerant of people than others. Every bear has its own comfort zone. If you are fishing on the same river as a bear, chances are they may wish to fish in the same spot as you. Not to worry, rivers can usually provide enough bank access for both humans and wildlife to fish; you may just have to move up or down stream. It is very important to remember not to crowd bears, or become complacent or negligent around bears.

Should you encounter a bear, give it plenty of space. Stop, stand your ground, and decide if you can get to a safe place. If you can, always increase the space. If the bear doesn’t see you, leave the area and try to watch the bear. If the bear sees you, identify yourself by waving your arms and calmly talk to the bear. While fishing with others stay close together; there’s safety in numbers. Whenever you can do so safely, increase the personal space between you and the bear

If a bear approaches you while you are fishing, there are several things to keep in mind.

Splashing fish attract bears. If you have a fish on your line and a bear approaches, cut your line or give the line some slack to stop the splashing. Never let a bear take anything away from you. It may cause the animal to further associate people and food. If a bear attempts to take fish from you, surrender your catch to the fast moving current.

When you clean your fish, please take a second to chop and throw the carcass into fast moving water along with all the fish waste parts. Fish, dead or alive, attract bears. I keep a fillet knife, zip lock bags, and one plastic bag with handles to transport fish from the river to my car when I am done fishing for the day. 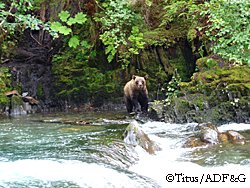 A brown bear fishes - and keeps an eye on the humans - at Sweetheart Creek in Southeast Alaska. Kim Titus photo.

Store all scented items in bear-resistant containers. Remember that your waders, vest, and clothes may smell fishy too!

Keep your eyes open! There are several tell-tale signs that bear traffic around the corner may be inevitable. Watch for bear tracks, fresh scat, trails and disturbed rocks. You may see many birds gathered on the ground or in trees and bushes. In Alaska, that can mean something in the area is dead and the birds are feeding on it, along with potential bears. There may or may not be any foul odors associated with a bear kill. Bears may actively and aggressively protect a kill, so be aware, keep your eyes open and try to avoid such situations.

To lower your risk of a negative interaction while in bear country, try to travel during daylight hours, make noise, and avoid what is called “tunnel vision.” Keep a sharp eye to the bushes, upstream, downstream, and behind you at all times. While fishing, it is hard to keep an eye to your back, however, you will want to stop on occasion and look around. Avoid places where geographic factors, such as heavy cover, prevent you from seeing what’s ahead. Be alert in noisy areas where the sound of running water may prevent you from hearing bears, and bears from hearing you in the brush.

Bears standing on their hind legs aren’t necessarily acting aggressively. They may be curious as to what you are and are just trying to get a better look or smell of you. 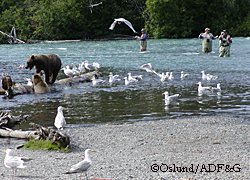 When you clean your fish, please take a second to chop and throw the carcass into fast moving water along with all the fish waste parts.

The chance of outrunning a bear are slim to none. Don’t run unless you are sure you can reach safety nearby. This should not be a forefront thought in your defense process. Think ahead, make sure to use your voice to let the bears know who, what, and where you are. Nothing else sounds like the human voice.

Bears will provide little if any warning before an attack. If you were to come upon a bear at close range, stand your ground. If the bear attacks, play dead and protect your neck and head. If you remain still the bear may no longer view you as a threat and it will most likely leave the area. If you play dead, stay dead! Avoid the temptation to get up immediately. The bear may be watching you to see if you are still a threat. Stay down.

Should you choose to use defense tactics in the event of an attack, you should know how to use your defense mechanism. There are many forms of defense tactics to use on bears. Common sense is the most effective. Avoidance and awareness will decrease your risk of a negative encounter in bear country.

Capsicum sprays have been used with success and must be used at close range. Use extreme caution as wind carrying the spray your direction can debilitate you instead of the bear. If you carry bear spray, keep it accessible, test the spray and know how to properly aim it.

Opinions on firearms vary. You should use the firearm you can shoot the most accurately, adequately, proficiently and safely. Please remember before discharging a firearm that thick and heavy brush may prevent you from seeing what may be behind the bear. Bears often use the same trails as humans, and those trails may not be easily visible in thick brush.

Alaska provides some of the best fishing on the planet. Make sure to take advantage of all our state has to offer and remember to keep both eyes open and take responsibility for yourself while venturing out this summer.

Samantha Oslund is a fish and wildlife technician with the sport fish division, based in Palmer.