By Riley Woodford and Kim Donohue 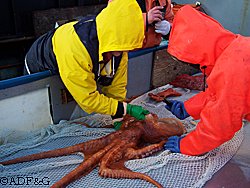 Charismatic mollusk are not words that are generally used together, but that’s exactly how researcher James Browning describes the giant north Pacific octopus. Biologists are exploring the potential for a commercial fishery for these fascinating, short-lived and abundant creatures.

The giant north Pacific octopus (Enteroctopus dofleini) is the largest species of octopus in the world. The animals grow to 70 or 100 pounds in their three-to-five year life span. It’s unusual to find an animal over 100 pounds, but one individual captured near Victoria, British Columbia in 1967 weighed 156 pounds and was almost 23 feet from arm tip to arm tip.

Alaska scuba divers are familiar with the animals, as they are often in fairly shallow water.

“They are masters of camouflage,” said Jeff Mondragon, an underwater photographer. “You’ll see one on sand and it blends perfectly, then it’ll swim over to the kelp and completely change color, really fast. It’ll even start swaying in the current like it’s part of the kelp.”

Mondragon said they have excellent vision. They are active day and night, but often den up by day.

James Browning spent decades studying salmon with the commercial fisheries division of the Alaska Department of Fish and Game. He now works with the Alaska Fisheries Development Foundation, and served as a principal investigator in a recent study on the octopus in Lower Cook Inlet and Prince William Sound.

“It’s been such a treat to work with octopus,” he said. “To be around them, to hold them, tag them and learn about them. They’re just tremendous animals to work with.”

Browning described a 50 pound octopus with a basketball-size head escaping off the deck of the research vessel. The octopus spied the scupper – a hole two inches tall and 10 inches wide that allows water to drain off the deck – crossed the deck and squeezed out. “If one arm finds the scupper hole, within one minute it will ooze it’s whole body through and drop to the water.” 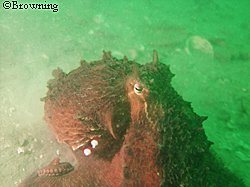 The giant north Pacific octopus has a high growth rate and is short lived, abundant, fecund and reproductively secretive. This animal has an elastomer tag marking it. Photo by D. Scheel. (Alaska Pacific University)

Giant octopus accounts for roughly 35,000 pounds of annual bycatch taken in state waters during the Lower Cook Inlet cod fishery. The octopus are sold as bait for cod and crab, and in 2006, they netted $26,000 for fishermen.

The Alaska Fisheries Development Foundation spearheaded a study to learn more about these animals in Kachemak Bay, Lower Cook Inlet and Prince William Sound. The foundation, along with the University of Alaska Southeast and Alaska Pacific University, hoped to gain important stock information about giant octopus to determine if a small boat fishery is feasible. In addition to assessing the resource, researchers wanted to learn more about how to best study octopus.

Fishermen explained that summer was a poor time to catch octopus, and the researchers decided to return to Lower Cook Inlet in October. They upped the number of traps to 250, and used a combination of custom-made plywood octopus pots (lair pots), shrimp pots, black cod pots and Korean hair crab pots, some baited and others unbaited. Octopus can be caught in unbaited pots because they seek out cavities for shelter.

The difference in timing was profound. “We pulled up to our first string of lair pots and there were 11 octopus in 16 pots,” he said. “Another string had 14 out of 18. We went on to tag over 100 animals.”

Browning said the researchers returned in December and caught another 100 animals, including three recaptures. They were delighted with the success. They were able to tag and track five large animals, weighing around 70 pounds. Browning said they were very mobile and left the area for deeper water after a few days. 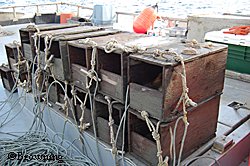 Octopus lair traps. Octopus can be caught in unbaited pots because they seek out cavities for shelter. Photo by D. Scheel. (Alaska Pacific University)

The animals were caught around Yukon Island and Sadie Cove, near where Kachemak Bay joins Lower Cook Inlet. Browning said they generally did not find them in less than 40 fathoms of water (240 feet), and usually between 40 and 80 fathoms.

Browning said he doesn’t know why the animals were so scarce in the summer and so abundant in the fall, but it seems they are moving into deeper or shallower waters.

Giant octopus mate in the spring, and the male dies within a couple of months. Females lay 20,000 to 100,000 eggs, tend them throughout incubation (five to seven months), and die shortly after the eggs hatch. Only about one percent of the planktonic larvae survive, but once settled to the sea floor, octopuses grow rapidly and have a significantly higher survival rate.

Browning said although the stock assessment work was done in a limited area, results indicated there were thousands of animals present. “It was very rough, but findings indicate there are lots if octopus, and that’s borne out by the high catch by cod fishermen. The resource is there.”

Regarding the research methodology, he said the new injected elastomer tag proved to be a success, superior to the modified Peterson Disc tag that has been used in finfish fisheries for years.

Browning said the octopus is well-suited for commercial exploitation. It is fecund, has a high growth rate, it’s short lived, abundant, and reproductively secretive.

Besides commercial uses, octopuses are valued by artists for their ink, as a traditional food, and by people of all ages who are interested in these remarkable sea creatures for their many intrinsic qualities.