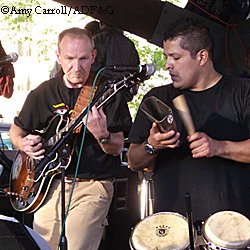 Antonio Diaz’ voice rang out from the stage. The house was packed and the Latin band Salsa Borealis was about to start their performance as the guest artist at the seventh annual Nome Folk Festival.

The solstice-week event was a big deal for Nome, and for the Juneau-based band as well. Nome had booked them solid for their entire four-day stay. “We realized the impact we had at the first afternoon workshop for kids,” said guitarist Russell Sandstrom. “The whole room was full. This was going to be big. We didn’t even have time to go birding for half a day or drive around the area.”

Sandstrom founded Salsa Borealis in the mid-1990s. It’s the artistic side of the man who is known by his coworkers at the Alaska Department of Fish and Game as the Boat Officer for the department’s research vessel Medeia.

“One of my guitars lives on the boat, and I also bring my laud,” he said, referring to a small 12-string ukulele. After pulling pots, sedating sea lions or capturing seals, Sandstrom’s music proves to be a welcome aspect of working at sea.

“One of the best memories I have on the Kittywake is of lying on my bunk at night listening to Russell playing the guitar,” said Jan Rumble, a fishery biologist with Fish and Game.

Sandstrom was hired by Fish and Game in 1995 and immediately went to sea. Fortunately, he was already an experienced mariner. “There was no transition time,” he said. “I came to work that morning, I got on the boat and away we went.”

In addition to running the boat, he now manages all budgeting, trip planning, crew training, routine maintenance, electrical work and plumbing for the R/V Medeia. He’s married to Patricia Macklin and they share a house in the Mendenhall Valley with a very large cat.

With an oceanography degree, Sandstrom is unusual among boat officers. His science background gives him an advantage working with Fish and Game biologists. “It’s a good fit,” he said. “We can work with the science staff in the planning stages to figure out what’s doable.” 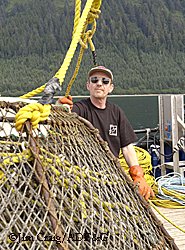 The Medeia has a roster of regularly scheduled trips - shellfish surveys, gillnet/herring fishery, groundfish habitat surveys, and various joint projects with NOAA. For many years they did sea lion surveys, but the money for that has dried up. “We’d have a little hospital set up on the back of the boat,” he said. “We’d attach transmitters to them. We did that up until last year.”

The average research trip on the Medeia is eight to 10 days, although he recalls a trip from hell that was 42 days. “I’ll never do that again,” he said. “Some sea lion trips took a month, but we’d be going into Craig once or twice to reprovision.”

Supreme Court Justice John Roberts was once a guest on the Medeia, representing the State of Alaska against the federal government in a Southeast waters jurisdiction lawsuit.

“We bunked in the same room. I like to tell people I slept with John Roberts,” Sandstrom joked.

Sandstrom was born in Germany. He grew up in England, Ecuador, and Brazil, and is fluent in Spanish and Portugese. Right out of college in Texas he landed a job with a geophysical exploration company, who promised a transfer to South America. “They sent me out to Midland, Texas,” he said. “Nine months later I’m still there, and the boss said, ‘How about Anchorage?’ I was in Anchorage for six months and then the whole operation closed down.”

During the pipeline days Sandstrom worked for R&M Consultants. “I was with them for four or five years and got to go all over the place and do all kinds of cool things, but in the late ‘70s I wanted to get back close to the water.”

He worked for the Department of Transportation in Juneau for a couple of years, then spent the early 1980s commercial fishing in the summer and his winters sailing in the Caribbean, around Belize, Honduras, and the Bahamas. 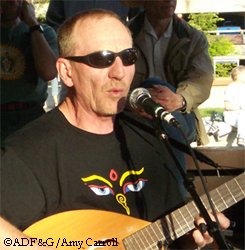 Latin music was an early influence but not his first musical pursuit. “Growing up in South America, my friends and I of course played rock and roll,” he said. “I played bluegrass for years in Juneau with Bob Banghart and John Hartle. We had a five piece bluegrass band called Be Natural Boys. Then I came back to the roots of Brazilian music.”

Sandstrom plays guitar, bass, banjo, cavaco (ukulele from Brazil or Portugal) and the laud, which he just bought. “It’s not so much an instrument in contemporary salsa, but it is common to Cuban music,” he explained. “It gives us a tie to the roots of this music before the 1970s New York City scene, and even before Cuban acoustic bands of 1930s and 1940s salsa big band era.”

His cavaco is seldom used these days, and he hasn’t touched his banjo in seven or eight years, except there was that moment at the Nome Folk Festival. “Rhonda (the band’s keyboard player) was on piano, Heather was singing, so I grabbed Jim’s banjo. And before you knew it, a big sing-along happened.”

The band plays classic Latin songs as well as their own compositions, and they released a CD in 2002. “I’ve written merenge, cumbia, salsa,” Sandstrom said. “We try to put our own original touch on our music. One of the biggest joys for me is to write a song and watch how it evolves as everyone adds their own creativity to it.”

Work also sometimes includes music. “Jim plays guitar a little, and when Doug Mecum was director – he’s a good singer and harmonica player,” Sandstrom said. “We’d have jam sessions or karaoke nights and Doug and I would back them up.”

Evenings on the water can be the most inspirational. “Lots of songs got their start on the boat,” Sandstrom said. As did the name for the band. “I was on late night wheel watch with a piece of paper putting Alaska words on one side and Latin words on the other,” he said, adding, “Don’t worry, I was paying attention to the radar too.”