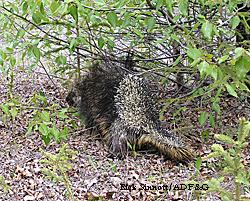 As Alaskans, we are privileged and sometimes plagued by healthy populations of wildlife, even in urban areas. Most notable are the larger varieties – especially moose and bear. Front-page stories and photo essays often feature these big mammals roaming our neighborhoods and streets. A few recent headlines include: “Moose attacks helicopter,” "Gratitude for place with more bears than streetlights,” “Watch out for moose on the loose.”

But there is a smaller wild creature found throughout Alaska’s wilderness and urban areas that rarely receives headline notoriety – the porcupine. Although they don’t get much media attention, talk to Alaska’s dog owners and gardeners and most will have a few stories to tell about these hefty rodents. Talk to a biologist, and you’ll discover that porcupines have some fascinating qualities.

“Last year we received repeated calls for a porcupine living in Midtown Anchorage,” said Jessy Coltrane, a wildlife biologist at the Alaska Department of Fish & Game. “We mainly get calls about porcupines because someone’s dog keeps getting into it or because it’s eating someone’s prize plant.”

Virtually every dog owner in Alaska has dealt with quill-covered tender muzzles. Those living in remote or vet-less communities keep a good supply of doggy downers on hand for taking on the task of removing quills. Dog owners with access to a veterinary clinic usually take their pathetic looking canine family member in, inevitably during overtime hours, to have quills professionally removed. The slow moving porcupines, irresistible to dogs, are a financial boon to veterinarians. I’m one of the lucky ones whose dog, after a particularly traumatic experience, finally joined the “look but don’t touch” club. Many dogs never learn to leave thorny pigs alone, and occasionally may develop complications from deeply embedded quills.

Backyard gardeners have different tales to tell. Their stories are not about getting quilled. Gardeners relate horticultural horrors – stealth porcupines waiting until nightfall to perform marauding mastication massacres.

“They will clear cut entire rows of strawberry plants, leaving only the stems and half ripened fruit,” said Ed Buyarski, a master gardener in Southeast Alaska. “Strawberry leaves are a porcupine’s number one favorite treat. They don’t generally eat the fruit, but eating all the leaves means that the fruit won’t mature and also exposes it to birds that do eat the fruit.”

Buyarski said that their number two favorite garden delicacy is half-grown raspberry canes. But that’s not all that they eat. Porcupines also love brussel spouts, cabbages, cherry and apple branches and fruit, wild and domestic geraniums, roses, and root vegetables.

“Out at the community garden, we will find orange carrot chips all over the ground,” he said. “In the early season they eat the plant tops, and later when the carrots are ready to harvest, they munch on the carrots.”

In December, Buyarski looked out his window and saw distinctive tracks in the snow; little paw prints and a dragging tail line leading to and from his ornamental cherry tree in the back yard. The marauder had chewed several smaller branches and broken off two or three larger ones. Buyarski followed the tracks to the invader and disposed of it.

(Editors note: porcupines are listed as unclassified game animals. There is no closed season or bag limit, but a hunting license is required to kill them.)

He recommends recycling porcupines rather than transplanting them to another area. “I buried one beneath my raspberries where the decomposing body provides nutrients to the plant,” he said. “Sometimes I just let the ravens and eagles have a free lunch.”

For keeping porcupines out of the yard, Buyarski hasn’t had much luck with bottled or packaged animal repellents. He recommends setting up a fence of old gillnet or seine netting, hanging it loosely so a porcupine can’t climb the netting. “If it’s too tight they will climb right up and over,” he said. “I’ve seen them climb chicken wire and walking like a tightrope performer along the top rung of a cyclone fence.” 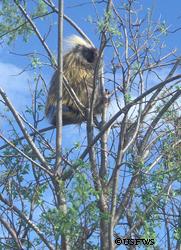 The North American porcupine’s scientific name, Erethizon dorsatum means irritating back, from The genus/Greek word Erethizo (“I irritate”) and the species/Latin word dorsatum, (‘the back”).

Porcupines are pests to some people but cherished by others. Wildlife watching enthusiasts find them particularly appealing because of their accessibility. Porcupines are widespread, not particularly timid or fast and are harmless unless you are within tail-slapping distance. This combination allows people of all ages to enjoy them at close range. Certain cultures greatly appreciate the porcupine; not only are quills used in handicrafts, the animal can be a life saving gift for someone lost or stranded in the woods. There is no other animal that a human can so easily catch and kill for an emergency meal.

A porcupine’s distinguishing and fascinating quills are actually modified hairs. A single adult porcupine weighing between 18 and 20 pounds may have up to 30,000 quills. At birth, they are wet and soft, but within a few hours, the quills dry and harden to provide a formidable armor.

Contrary to myth, porcupines do not shoot their quills. There must be contact for quills to be released. The quill release mechanism is unusual – pull on a porcupine quill and there is a lot of resistance, push on it and it comes out easily. So if something tries to grab a porcupine or if a porcupine tail-slaps an assailant, the contact pressure effortlessly releases a painful message.

The majority of quills are white with black tips and can grow up to four inches long. On the upper side of the tail is a section of smaller all black quills. When solid, direct contact is exerted, these smaller quills have the nasty ability to become completely embedded under the skin. A porcupine’s quills are coated with a greasy, fatty acid substance, more so during the summer when the animals have a good healthy diet. This slick coating allows quills to penetrate an attacker more easily and also contains antibiotic properties.

The flip side of a porcupine has no quills. The belly and muzzle are covered in thick soft fur and the underside of the tail is covered with stiff bristles. A porcupine will press these bristles against a tree trunk while climbing, which keeps the relatively heavy rodent from succumbing to gravity. Indigenous people once used this section of tail as a hairbrush.

Until a porcupine feels threatened, the quills lay flat interspersed among its fur. When frightened, the quills become erect spikes pointing in all directions. Quills are a porcupine’s primary defense, but they have additional protective warnings and deterrents. In close quarters with a porcupine you might hear and notice teeth chattering or a pungent smell. If the pincushion presentation and teeth chattering are not effective in warning a foe, then a special gland in the area just above the tail, called the rosette, releases a pungent odor.

Coltrane has studied porcupines in Alaska and shared some of her knowledge. She said porcupines have relatively few predators in Alaska, mainly lynx and coyotes. In the Lower 48, fishers account for most porcupine mortality, but cougars are also quick and adept at taking them. Owls, wolves, bears, foxes and other predators occasionally kill a porcupine, but these animals usually avoid encounters.

“Porcupines are amazing little creatures that have carved out a good niche for themselves,” Coltrane said. “There are few other animals that climb trees and forage on bark, twigs and leaves, so they have little competition for their food supply. Being high in a tree much of the time also keeps them relatively safe from predators.”

Porcupines are found from the North Slope to the Southeast Panhandle. The only areas in Alaska where you will not find porcupines is the Alaska Peninsula, Kodiak, Nunivak, St. Lawrence Islands, and some Southeast Islands. Coltrane said that biologists know where porcupines can be found in Alaska, but knowing how many there are is a mystery. 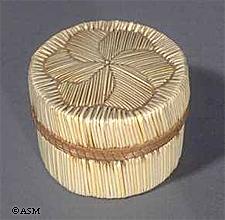 “It’s very difficult to determine density. Obtaining population data on a small nocturnal creature that often dwells obscured in trees is nearly impossible,” she said. “We do know that they are quite long lived, up to 20 years, and slow to reproduce, females have just one offspring a year. It also appears that in Southeast Alaska they are more commonly spotted and encountered.”

Porcupines generally have a fairly confined territory, although unusual walkabouts of 15 miles or more have been documented. Males tend to roam farther than females, especially during mating season, but both sexes generally stay within a mile or two of one location. During winter their range becomes very limited. Porcupines will often spend several days or even weeks in the same few trees, and other animals reap the benefits of this behavior.

“Beneath a porcupine tree you find a lot of debris, small twigs and branches that they break off, chew and then drop,” Coltrane said. “This particular habit plays an important role in the food chain for other animals trying to survive the winter. Snow shoe hares will come around to eat porcupine leftovers, then lynx and coyotes come in for the hares. The area beneath a porcupine tree can become a kind of feeding station. It’s amazing how many different animal tracks you will find in the snow around one of these trees.”

As winter approaches, the porcupine grows a thick insulating undercoat. During winter, they will seek out a den to escape the cold and elements when they are not feeding. A den can be any shelter – a rock crevice, thick brush or tree branches, or a hollowed log or tree trunk.

“One of the really cool things about porcupines is that no one really understands how they survive the winter,” Coltrane said. “They don’t hibernate, and their winter diets are really low in nutrients.”

Coltrane said that their diet may vary depending on where in Alaska they live, but it’s poor throughout the state. “Their winter diet is high in toxins and secondary compounds; most animals could never survive on what they eat,” she said.

In Southcentral many feed on birch and white spruce cambium, as well as white spruce needles. In Southeast they eat mainly spruce needles and twigs, in the Northern regions some eat nothing but willow twigs for several months. How they adapt physiologically, or how they are able to metabolize this kind of diet with enough calories to survive in the severe cold is a big mystery. Coltrane said that porcupines will sometime loose 30 percent of their body weight, but it is still not understood how weight fluctuation affects the porcupine’s short-term or long-term health.

“We still have much to learn about porcupines,” she said.

- They have the longest gestation period of any rodent, about seven months. They mate in the fall and give birth in the spring.

- A baby porcupine is called a porcupette. Porcupettes stay with their mothers until fall.

- Porcupines are extremely vocal and make a wide range of noises from meow-like sounds to hisses, grunts, growls, and screams.

- Falling out of trees is not uncommon. Research conducted by Uldis Roze, author of “the North American Porcupine” revealed healed fractures in just over 35% of the skeletons he examined.

- Though rare, when they really want to get away, they gallop – a very funny sight according to Coltrane.

- They are singular creatures. Adults only interact during mating season or when forced to occupy the same den in winter.


Nancy Long, who once nearly rammed a porcupine in the belly with her head while climbing a tree, survived the encounter to continue her work as Department Information Officer Alaska Department of Fish and Game.