The Long Sleep:
Which Animals Hibernate? 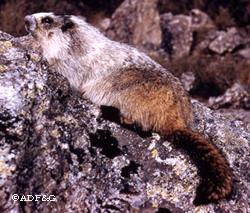 Arctic ground squirrels hibernate alone, and most marmot species (such as this hoary marmot) tend to hibernate in family groups.

Now that spring is almost here, many of Alaska’s animals will soon be waking from a long winter’s sleep.

But which animals spend the winter hibernating? Most people think immediately of bears, but black and brown bears are just two of the seven mammals that curl up in dens or burrows or otherwise slumber through Alaska’s cold, dark season. The others are Alaska marmots, hoary marmots, woodchucks, arctic ground squirrels and brown bats, according to Loren Buck, a professor of biology at the University of Alaska Anchorage.

Perhaps the most amazing of these species is the arctic ground squirrel. For hibernation, arctic ground squirrels burrow about three feet beneath the soil with an insulating layer of snow above. They survive in a catatonic state by dropping their metabolism and core body temperatures to roughly 27 degrees Fahrenheit, the lowest known body temperature for a hibernating mammal.

Arctic ground squirrels can hibernate for as long as eight months but increase their metabolic rates and body temperatures for 12- to 14-hour periods every 20 days or so, according to Buck. Scientists don’t know why some hibernators rouse periodically but suspect the animals may need to warm up to replenish or clear out substances that have either been depleted or have built up during hibernation. The net effect is just a short time of consciousness during Alaska’s long winter.

“For arctic ground squirrels, winter might only seem to be 10 or 12 days long,” Buck said.

While arctic ground squirrels hibernate alone, most marmot species tend to hibernate in family groups in rock piles or boulder fields. They insulate rocky burrows with snow and dry foliage, and in laboratory settings researchers have observed Alaska marmots chinking drafts in their burrows with a mixture of vegetation and feces.

The little brown bat, which weighs just five grams and is about half the size of a chickadee, is the tiniest hibernating mammal in Alaska. It makes sense that small animals would use hibernation to survive winter because, being small, they have a difficult time retaining body heat. But the little brown bat is so small, Buck said, it’s amazing it can live through winter this far north.

Typically these bats hang upside down in tree cavities, but they also find shelter in house eaves or abandoned buildings.

Bears, in contrast to bats, are unusual hibernators because of their large size. They also stand out because they don’t fall into “torpor,” or decreased consciousness, like most other hibernators. 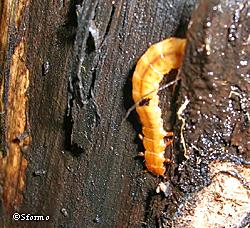 Waking a hibernating arctic ground squirrel can take hours or days. Bears, on the other hand, are aware of their surroundings and have even been known to attack when disturbed in winter.

Bears must be alert because they give birth and raise babies in their dens. “Bears sleep, but they’re not out cold,” said Sean Farley, a research biologist with the Alaska Department of Fish and Game. “They have to take care of their young.”

Bears are also unique because, unlike some hibernators, they do not eat, drink or excrete at all while hibernating. Bears have adapted to recycle their waste products, said Jessy Coltrane, the assistant area biologist for Anchorage. A fecal plug forms to help keep the waste inside.

Black bears are usually the first Anchorage-area bears to wake up in mid-April, Coltrane said. Brown bears tend to wake up in May, with sows and cubs emerging last. Emergent dates depend largely on the weather and the altitude and position of the den.

Whether or not polar bears truly hibernate is debated among biologists. Basically, not enough is known, Buck said.

What is known is that pregnant polar bears construct dens in which they give birth and raise their young, much like other hibernating bears. Also, when weather is extremely inclement or when they cannot hunt, male polar bears and lone females will also spend time fasting, often in snow dens, Farley said.

Which animals, besides mammals, hibernate?

Wood frogs, salamanders and many insects also cope with Alaska’s winters by damping down their metabolism and finding shelter from the cold.

Although not a lot is known about how insects survive Alaska’s cold winters, recent research indicates that at least some insects are extremely skilled surviving subzero temperatures.

Most of Alaska’s insects use two basic strategies to survive winter: They either figure out how to freeze without dying, or employ strategies to keep themselves from freezing, even in extreme cold. Biologists call these adaptations freeze tolerance and freeze avoidance.

Two different beetles currently being studied at UAF’s Institute of Arctic Biology hibernation laboratory provide good examples of freeze avoidance and freeze tolerance. Both overwinter as both larva and adults.

The red flat bark beetle, Cucujus clavipes, is currently being studied by researchers at the University of Alaska Fairbanks and the University of Notre Dame in Indiana. This beetle can resist freezing to temperatures as low as –150 degrees Celsius (about –238 degrees Fahrenheit) in the laboratory under the right conditions. 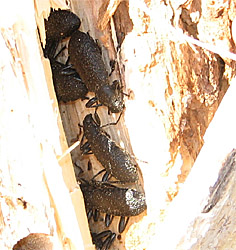 Upis ceramboides, a kind of darkling beetle, survives temperatures as low as – 60 degrees C by freezing without rupturing cell walls, and the larvae can go even lower.

Whether that beetle can survive temperatures that low in the wild is not known: It just doesn’t get that cold, even in Alaska, said Todd Sformo, a University of Alaska Fairbanks graduate student who studies how insects survive extreme cold.

The red flat bark beetle ranges from as far north as Wiseman, Alaska, to as far south as North Carolina, survives by supercooling, or lowering the freezing point of its body fluids. To do this, the beetle stops feeding in the fall to clear its gut of any food particles or bacteria that could form a nucleus on which ice crystals could aggregate.

In addition, the beetles produce an antifreeze protein that inhibits the formation of ice, and they produce glycerol, another type of antifreeze, that prevents water crystals from forming within cells.

Lastly, the beetles are very good at tolerating dehydration. In the summer, about 65 percent of the beetle’s body is made up of water. In winter, that amount can drop as low as 30 percent, Sformo said.

Furthermore, Sformo has evidence that some insects, under laboratory conditions, can deep supercool to lows of -60 to -70s without freezing. He even sent specimens to a lab in California to see how low they can resist freezing. They found that under the right conditions some may be able to vitrify: The remaining fluid left in the beetle’s body becomes glassy, Sformo said. It is still technically a liquid but has solid-like properties, he said.

Interestingly, the freezing point of the red flat bark beetle has adapted to different climates. In Alaska, the insect can survive at temperatures that would kill the same beetle in Indiana, Sformo said.

Another beetle, Upis ceramboides, a kind of darkling beetle, illustrates the other survival strategy – freeze tolerance. The adults have been found to survive temperatures as low as –60 degrees Celsius by freezing without rupturing cell walls and dying, and the larvae can go even lower.

When temperatures reach –6 degrees Celsius to -9 degrees Celsius, fluid outside of the beetle’s cells begins to freeze. This creates a gradient that draws water out of the cell, which rids the cells of liquid and concentrates solutes inside the cell that lower the freezing point even further.

This allows the beetles to partially freeze without destroying cell structures, Sformo said.