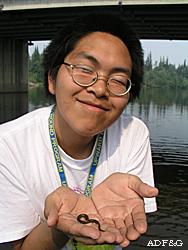 A high school student on the Chena River with a juvenile lamprey, called an ammocoete. The table of contents photo shows three arctic lampreys.

This past summer, a group of high school students and I stood on a bank of the Chena River in Fairbanks, scooping through the mud and silt of a shallow backwater with shovels. We knelt down and sifted through the mud we had dug up, pulling out squirming worm-like organisms and putting them into white dishpans filled with a couple inches of water. A group of tourists from the Lower 48 came over to see what we were doing. Upon seeing the dishpans filled with wiggling, 3-inch long creatures zipping through the water like snakes, one man asked, “What the heck are those?!”

“Lampreys,” I answered. “These are juveniles.”

A number of the tourists were from the Midwest, and so were familiar with another species of lamprey – the sea lamprey. Sea lampreys were accidentally introduced to the Great Lakes via shipping canals and have become a major problem by adversely affecting the resident commercial and game fish populations. Millions of dollars are spent each year in Wisconsin and Michigan in an attempt to eradicate, or at the very least control, the invasive sea lamprey population. So of course the man then said to me, “You’ve got those up here too, huh? What are you doing – trying to kill them?”

“No. These are Arctic lampreys,” I answered. “These are native to Alaska. We like them up here. People even eat them!”

Alaska is home to two anadromous species of lamprey – the Pacific lamprey and the arctic lamprey. Both of these species are born in freshwater. After rearing in rivers and streams for a number of years, they swim downstream to the ocean. Eventually, at the end of their lives, Pacific and arctic lampreys leave the ocean and swim upstream to spawn, back to the same rivers and streams where they were born. In this respect, they share a life history very similar to Pacific salmon, but the similarity ends there. Since lampreys are such unique and odd-looking animals, many people are surprised to learn that they are even considered to be a fish.

First and foremost, lampreys are unique because of how they look. A lamprey is long and cylindrical, lacking paired fins or scales. A lamprey looks more like a snake or an eel than a stereotypical fish. In fact, throughout Alaska, most people commonly call them eels due to this similarity. But lampreys are quite different from eels because of their mouths. Lampreys lack jaws. Instead, an adult lamprey has a disk-like mouth filled with small sharp teeth. Adult lampreys use this disk to attach to other fish in the ocean. Then they use their teeth and tongues to rasp through the scales and skin of the host fish in order to feed on its blood and fluids. Some fish die from lamprey attacks, but in many cases, fish survive the experience. The lamprey releases and drops off after the meal. Commercial and subsistence fishers throughout Alaska are quite familiar with the tell-tale, dime-sized circular scars on salmon and trout that have been fed upon by lampreys. 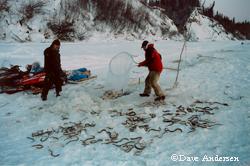 Subsistence harvest of lampreys on the Yukon River. Photo by Dave Andersen

Eventually, both Pacific and arctic lampreys leave the ocean to spawn. The spawning migrations of lampreys are as amazing as that of salmon. Consider the fact that some arctic lampreys entering the mouth of the Yukon River swim nearly 2,000 miles upriver well into Canada. Some lifelong Alaskans aren’t even aware of this incredible migration because arctic lampreys make this journey in the winter under 3 feet of ice.

However, some Native peoples in Alaska have long relied on migrating lampreys as an important food source. In the Yukon River village of Anvik, people chainsaw holes into the ice sometime around Thanksgiving. They use dip nets to scoop lampreys up through the ice. Another method is to use an eel-rake. Nails are hammered through the end of a long spruce pole so that the sharp ends stick out like a rake. This contraption is then swished back and forth through the hole in the ice into the water. The abundance of migrating lampreys is so great that they are impaled on the nails. A person with a good knowledge of when the lampreys will be running can get sled-loads of lampreys this way. Despite being relatively small (on average, 10 inches long), the meat of an arctic lamprey is extremely rich. People eat lampreys and also feed them to their sled dogs. In parts of Asia, lamprey meat is considered a delicacy and will fetch a higher price per pound than salmon. Recently, a small scale commercial fishery of arctic lampreys took place on the Yukon River.

Upon reaching their spawning grounds in fresh water, lampreys construct nests for their eggs. Like salmon, lampreys spawn in gravel. They use their suction mouths to move large rocks and then fan smaller particles away with their tails in order to create a shallow depression for their eggs. Intertwined, the male and female then simultaneously release sperm and eggs into the nest. After the spawning process, lampreys die. Their decaying bodies release valuable marine nutrients into the watersheds of Alaska. 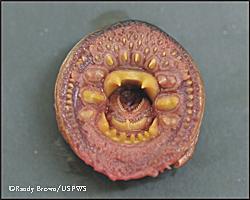 The rasping mouth of the arctic lamprey, photo by Randy Brown.

Juvenile lampreys that subsequently hatch in freshwater look remarkably different than adults. These juveniles, called ammocoetes, do not have eyes or the disk-like mouths of their parents. Instead, they have a small gland on their heads to detect the presence or absence of light and a small funnel-shaped mouth lacking teeth. They burrow into the silt and mud of shallow pools and backwaters of rivers and sloughs and filter microorganisms and organic matter from the sediment. Depending on the river system, ammocoetes remain as filter feeders in fresh water for three to seven years before metamorphosing into adults. During this rearing period in fresh water, a myriad of other animals feed on juvenile lampreys including river otters and many bird species. Fish such as burbot, sheefish, and northern pike feed on the juveniles as well. In Fairbanks, many anglers have traditionally dug through the mud for juvenile lampreys to use as burbot bait. In fact, given that the juveniles are between 3 to 5 inches long, lack eyes, and are found in the mud, I’ve met one angler who had always thought that he was digging up aquatic worms for bait!

In Fairbanks, some people have never seen a lamprey despite their abundance in the Chena River. This is because as juveniles, they live their lives down in the mud, and as adults, they migrate under the ice.

For those aware of the problems with sea lampreys in the Great Lakes it’s always surprising to hear that lampreys are native to Alaska and that we like them. As the tourists watched us digging up juvenile lampreys that day, they just shook their heads in amazement.
It’s just another thing that makes Alaska an amazing place.

Erik Anderson is an educator in Fairbanks with the Alaska Department of Fish and Game division of sport fish.