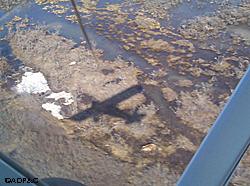 Using aircraft and sophisticated math, biologists are able to efficiently and accurately assess bear numbers in many areas of Alaska. A brown bear can be seen in the center lower third of the frame, just behind the shadow of the airplane.

When it comes to counting bears in Alaska, biometrician Earl Becker has spent much of his career developing a cost-effective and reliable survey tool.

Biologists employ two main survey tools to estimate bear populations. The most common method, known as “mark-recapture,” involves capturing animals such as bears, “marking” them with radio collars and then noting how many of those bears are recaptured at a later date. The proportion of recaptured bears compared to the total sample of captured bears is then run through a statistical equation that estimates the overall bear population.

Mark-recapture is a proven method for estimating bear populations within small to moderately-sized areas, but is more costly and may not be logistically feasible for larger areas, said Becker, an Alaska Department of Fish and Game research supervisor.

Becker and his collaborator, Pham Quang, a professor emeritus at the University of Alaska Fairbanks, have chosen the other tool, known as a “line transect survey,” to estimate the number of bears in Game Management Unit 16B, an area bounded by the Alaska Range on the north and west, the Chakachatna River on the south and the Kahiltna River on the east.

Becker and Quang have invested years in refining the survey method so that it works well to count bears in Alaska. The department has allocated $160,000 for the project, which is expected to be complete by spring of 2009. Some of the funding came from special general funds provided by the Alaska Legislature to enhance game management efforts.

Grant Hilderbrand, Region II Supervisor for the Alaska Department of Fish and Game, said Becker and Quang’s survey will provide the first reliable bear estimate for Unit 16B, an intensive management area with an active wolf control program. 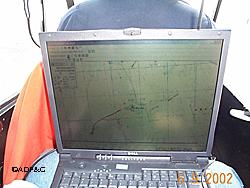 Biologists keep an eye on the computer as well as the landscape during aerial bear surveys.

Biologists have some idea already of the number of bears that live in nearby coastal and Interior regions, but don’t know how many bears live in the transitional zone in between. Unit 16B contains some of that varied transitional terrain that ranges from coastal, salmon-rich areas to Interior boreal forest areas.

“What is the bear population in the middle?” Hilderbrand asked. “Right now we don’t know.”

A reliable bear estimate for Unit 16B is a priority for the Division of Wildlife Conservation because it is one of the areas with an active wolf control program. Becker said biologists believe bear predation may play be playing a significant role in moose survival. They believe the area has a more black bears than brown bears. The survey will tell biologists the ratio of brown bears to black bears. Also, if the Alaska Board of Game ever decides to consider bear control for the region, biologists would first need to know how many bears live in the area, Becker said.

Becker said the line-transect method is particularly suited to Unit 16B because of the variety of the terrain and the large survey area. With mark-recapture work, biologists might choose a small study region that may or may not prove to be representative when extrapolated to the larger unit.

Line transects, which rely on aerial surveys, can be tricky to pull off. Biologists need to time the aerial surveys optimally so they are searching for bears after hibernation has ended but before vegetation grows so it obscures bears. Becker said he anticipates hiring five airplanes for seven days of aerial surveys. He expects his crew to complete a total of 800 to 1,000 transects, with each transect about 30 kilometers long. Each plane carries two spotters – the pilot and a biologist who sits behind the pilot. 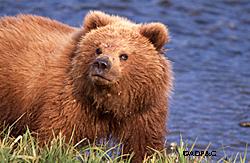 Transect locations are randomly chosen and a global positioning system on board the airplane documents the precise route the airplane flies. Some of the transects are straight lines, but others are curved to match the topography. Becker said no surveys will be conducted above the 4,500-foot level since few bears are found at such high altitudes. The total area surveyed will cover 21,035 square kilometers of which 17,199 square kilometers are bear habitat below 4500 feet in elevation.

Once the surveys are flown, Becker begins the challenging work of figuring out mathematical corrections to create a “sightability model” that accounts for bears that were undoubtedly there when the survey was flown but were missed by surveyors.

Becker said he also must determine the maximum effective survey distance at which surveyors were spotting bears, so he can determine the overall area surveyed. That number is also needed as a variable in the sightability model.

To non-mathematicians, the formulas that Becker and Quang have modified and devised for these surveys look as incomprehensible as chicken scratchings. But to Becker and Quang, figuring out how to use the data to obtain the best detection model and population estimate is part of the fun and the challenge.

Becker said he and Quang have been working to build and refine the method for use on bear populations for a decade. They are considered pioneers of the survey tool in Alaska. Comparisons between mark-recapture and line-transect results have shown close agreement between the two methods. But line transect work is far cheaper.

“With this method I can get a population estimate for both brown and black bears for less than the cost of estimating one bear population using mark-recapture in a small area,” Becker said.