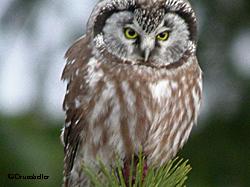 A boreal owl sighted in Gustavus during the Great Backyard Bird Count in 2004. Photo by Nat Drumheller

Kindergarten students counted birds at recess. Beginning birders watched birds at their feeder, and experienced birders stalked feathered wildlife along the waterfront and in the forest.

Last year the Great Backyard Bird Count enticed Alaskans to spend a few minutes or a few hours watching birds. Birders contributed their observations to a North America database. The event, Feb. 16–19, is sponsored by the Cornell Lab of Ornithology and National Audubon Society.

Observers simply count the highest number of each species they see during an outing or a sitting, and enter their tally on the Great Backyard Bird Count web site at www.birdsource.org/gbbc. There is no registration and it’s free.

Visitors to the web site can compare their sightings with results from other participants, as checklists pour in from throughout the U.S. and Canada. These counts offer a real-time snapshot of the numbers and kinds of birds that people are finding across North America.

“You can go online and watch the maps change as the information is updated, as you add it,” said Brenda Wright, who coordinates the event in Juneau. “You can look at Alaska, or a specific species, or the ten most common birds recorded. It’s fun for kids.”

Wright, a member of the Juneau Audubon Society, said the event is a great opportunity for teachers. “We have videos in all the school libraries of the 15 most common birds in Juneau,” she said. “Kids could watch this short video and then look out the window, do a count for ten minutes, then get on the computer and see.”

Entering your bird count information on the website is easy, said Nat Drumheller, a Gustavus birder who has participated in the Great Backyard Bird Count for four years. He said there are some simple questions regarding the habitat where you counted, how long you counted, and so forth.

“The site is user-friendly,” he said.

Drumheller and his friend Phoebe Vanselow counted birds in different habitats around Gustavus including forest, sea, beach and rivers, walking through the different areas just as when they are birding any other time.

“Some people watch their feeders and get good birds,” he said. “It is important to visit the GBBC website before the count for instructions, although they are simple. This count is set up a little different than other counts such as the Christmas Bird Count. You can count birds anywhere. You just need to keep a separate checklist for each location. You can count for all four days or for as little as fifteen minutes. They encourage everyone to participate in the count, regardless of skill level.” 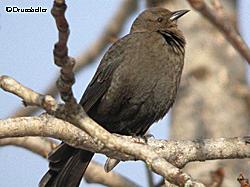 A Brewers blackbird, photographed by Nat Drumheller in Gustavus during the 2006 February bird count.

Drumheller said the weekend-long event seems to be more about assessing distribution and how many checklists a species shows up on rather than trying to nail down how many there are of a species.

Wright said Audubon and Cornell use data that’s gathered during the Backyard bird count to look at trends.

“They also focus on birds that people see at feeders that may have diseases, such as the house sparrow eye disease,” Wright said. “They found that the disease went across the country in something like 22 months.”

Interest and participation is growing in Juneau and Gustavus. “We had the best count so far last year,” Wright said. “We had three counts by three people eight years ago, last year it was 88 counts by about 30 people.”

In 2006, 44 different species were observed by Juneau participants, and more than 3,000 birds were counted. Sea bird numbers were high for Barrows goldeneye (247), glaucous-winged gulls (564) and surf scoters (257), and more than 400 mallards were counted. Northwestern crows (458) also registered high. Chickadees, pine siskins and juncos were the abundant songbirds. For a full account, go to the Juneau Audubon homepage (http://www.juneau-audubon-society.org/)and follow the link.

Drumheller said highlights in Gustavus have included sightings of rare birds. The highlight of the 2003 count was a Virginia rail. In 2004 a boreal owl showed up for the count, a rare bird for southeast Alaska. In 2005, the most unusual species (for February) were two Lapland longspurs and five rusty blackbirds.

“A personal highlight for me during this count was watching and listening as a northern shrike sang for several minutes from a cottonwood,” he said. “It had a surprisingly beautiful voice.”

Drumheller said last year a Brewer’s blackbird and a long-billed dowitcher were sighted, far north of their winter ranges. A horned lark and six species of owls were also sighted. Gustavus ended up with 73 species, the record number so far for the GBBC for Gustavus.

The Audubon Society reported that across the United States and Canada last year, participants submitted more than 60,000 checklists and reported 7.5 million birds overall and 623 different species.


Riley Woodford is a writer with the Division of Wildlife Conservation and a big fan of sea ducks and songbirds.