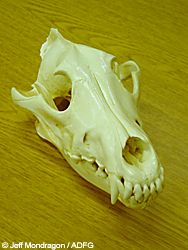 Every year thousands of people hunt and trap in Alaska. One of the small treasurers discarded by many of these outdoor people is the skull of the hunted or trapped animal. A cleaned skull is a source of curiosity and wonder - a mirror of an animal's mode of life - providing insights into the animal's diet, strength of bite and its specially developed senses. In addition to enjoying the natural wonder of skulls, a skull collection can be a great addition to a classroom in a variety of courses, including art, science and social studies. Cleaning a skull is an easy process and can be no more unpleasant than pulling meat off a cooked soup bone. Here is how to clean a skull for display or study.

First, be sure to completely skin the hide off of the skull. The hide contains oils that permeate the bone when boiled and the result is a yellow, greasy skull. If the skull cannot be cleaned soon after the animal's death, freeze it. If the skull is malodorous from decay, it will be repugnant during boiling! In this situation, boil on a camp stove outside in a throw-away pot.

Immerse the skull in water and let boil. Don't overcook it, though, the skull can fall apart if it is boiled or soaked for to long. A thawed wolf or bear skull requires 2-3 hours of boiling. Smaller skulls, such as marten, fox or lynx, take about 40-60 minutes. Skulls from old age animals often require longer boiling. Frozen skulls will take about 15-30 minutes longer. Keep in mind that the teeth will likely fall out during boiling, and you'll need to strain them out of the bottom of the pot (and glue them back in later), so don't just dump out the water. Boiling is completed when the muscle pulls off easily. Remove the meat and brain tissue while they are still quite warm. Once cool and dry, thorough removal of tissue is more difficult.

When cooked sufficiently, the muscle comes off in hunks. Use a small knife (a scalpel works great if you have one) to gently scrape away stubborn tissue, but take care not to cut or mar the bone. Nerve and connective tissue can be teased out of holes and crevices with a wire or large tweezers.

The tough part is cleaning inside the cranium (brain case). This is done through the oval opening at the back of the skull, where the skull attaches to the spine. On a bear or wolf, a small spoon is handy for scooping out the brain. Running a stiff wire or small knife around inside the skull, between the brain tissue and bone, helps loosen it and sometimes it will come out in large pieces. With smaller skulls, use a large tweezers to tease out brain tissue. Repeated rinsing flushes out loose tissue. There are scroll-like, delicate bones in the nasal cavities of animals. If you want to keep them in the skull, work gently. Flushing water through the brain and nasal cavity will work out some of the residual tissue in these bones.

After the skull is as clean as you can get it, soak it in an enzyme-bleach powder (such a Biz) using about ¾ cup to a gallon of water. Don't use liquid bleach, it is harsher on the bone and does not have the enzyme action that is needed to break down residual tissue. Leave big skulls (bear, wolf, caribou, bison) in this solution for 3 days. Smaller skulls may require less than 1.5 days. The skull has soaked long enough when the remaining tissue can be easily removed. A small, stiff-bristled brush, a small knife (scalpel) and tweezers are adequate tools for doing the final clean up. Rinse the skull well after you have removed the last, stubborn tissues.

Teeth will invariably loosen during boiling and cleaning. Hang on to them and glue them back in place with white glue once the skull is clean and dry. The skull should be completely dry if it is to be stored in a box or plastic bag.

In the Alaskan interior the dry climate makes it trickier to preserve a cleaned skull. Boiling and soaking should be done at absolute minimum times to reduce excessive cracking of bone in dry climates. The teeth, in particular, become very brittle and cracked. Once the skull is clean and dry it can be sealed with varathane to help retard cracking but it may turn yellow from the spray. Spray (or paint) the skull with 2 light coats and 1 final, thick coat of varathane. Painting the teeth and skull with diluted, white glue before applying varathane helps too. If teeth start to crack, try filling the cracks with super glue to reduce further fracturing.

There are a few things to remember when collecting specimens.

1. Check the regulations. Skulls of animals taken during established hunting seasons within state and federal regulations are legal to possess. Some nongame species are protected by state and federal laws and it is illegal to possess any parts of these animals. Examples are bald eagles, any birds protected by the migratory bird act, and marine mammals.
2. A hunter or trapper can give you a skull, but check the sealing requirements for that species. Skulls cannot be sold, purchased or bartered.
3. Make sure a representative of ADF&G for species that require it, such as wolves and bears, has sealed the skull. Once the skull is cleaned, the seal can be removed.
4. Don't kill animals just for skulls. This could be considered wanton waste, which is a misdemeanor.
5. Handle carnivore skulls from the western and northern coasts of Alaska using gloves, preferably disposable ones. There have been several cases of rabies reported from these areas particularly in wolves and foxes. Once the skull has boiled for about 30 minutes the rabies virus will be destroyed.
6. When in doubt about possession or legality, call the Department of Fish and Game or Fish and Wildlife Protection (Department of Public Safety).