No Avian Flu in Alaska 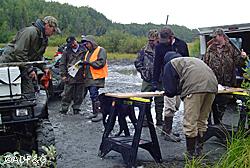 Biologists near Palmer check hunter-killed waterfowl for signs of avian influenza. No sign was found in Alaska.

Now that the year has ended and all the results from various avian flu sampling efforts have returned from laboratories, scientists can safely conclude that Asian H5N1 was not found in Alaska in 2006.

At the beginning of the year, scientists were concerned that a highly pathogenic strain of bird flu, known as Asian H5N1, might show up first in Alaska and then spread into the rest of North America.

It appeared at the time that wild birds were capable of spreading the disease over long distances. And because Alaska is considered an avian crossroads where migratory birds from multiple continents mix, the state was thought to be a likely entry point for the disease into North America.

Those concerns led to a flurry of activity by wildlife managers and an influx of federal funding to sample wild birds and prepare possible responses should Asian H5N1 turn up in Alaska.

As a result, roughly 21,000 wild birds in Alaska were sampled for avian flu by federal and state agencies last year.

That number exceeded state and federal goals set out at the beginning of the year, according to Tom Rothe, waterfowl coordinator with the Alaska Department of Fish and Game.

Nationally, the aim was to test 100,000 birds for avian flu. In Alaska, the goal was to sample 15,000 to 20,000 birds of 26 target species that could be the most likely carriers of Asian H5N1 because of their connection to Asia, their association with outbreak areas, or other factors.

No cases of Asian H5N1 were found in the Alaska samples, Rothe reported. However, as Rothe and other scientists expected, other low pathogenic forms of avian flu did turn up in the wild birds sampled.

Fish and Game assisted U.S. Fish and Wildlife Service and U.S. Department of Agriculture with the sampling, contributing about 1,600 of the 21,000 samples from Alaska. Rather than focus the state’s wild bird sampling in new areas throughout Alaska, Rothe said Fish and Game chose instead to augment federal sampling efforts by expanding sampling at existing bird-banding camps. Samples were collected at Susitna Flats, Minto Flats and Creamers Field.

The largest proportions of the live birds sampled were northern pintails, one of the primary target species, and mallards, Rothe said. 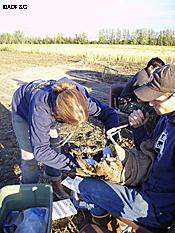 “Sampling went very well,” Rothe said. “Although we may have missed the peak of pintail migration, making it difficult to reach our sampling goals before baiting was outlawed before the opening of the duck hunting season.” Technicians at Minto Flats also had to cope with fluctuating water levels, which made duck trapping difficult.

The waterfowl were captured in cage-like traps baited with grain at Minto and Susitna Flats. The birds find it easy to swim into the traps but cannot find their way out until released. The cranes at Creamers Field were caught with rocket nets fired over the birds at baited sites. All birds were banded with metal leg bands to obtain records on migration and longevity.

At the opening of the fall waterfowl season, 450 samples were collected from hunter-shot birds at Susitna Flats, Palmer Hay Flats, and Mendenhall Wetlands State Game Refuges. Fish and Game took the lead in sampling sport-harvested waterfowl. Over half of the samples were taken from pintails and mallards, but green-winged teal and wigeon were sampled as well.

Interestingly, avian flu rates tend to be lowest in spring and summer and highest in the fall, near migration. The higher prevalence of flu in fall is likely due to the gathering of waterfowl on staging areas and an influx in late summer of young birds that have not developed immunities to the flu, Rothe said.

Because Alaska was considered the “frontline” this summer for avian flu testing, Fish and Game also took a leading role this year in helping other state wildlife agencies and flyway councils organize sampling efforts and prepare for the possible arrival of Asian H5N1 bird flu in North America. Rothe said he and Matt Robus, director of the Division of Wildlife Conservation, assisted other states in getting up to speed on bird flu and developing cooperative surveillance efforts. 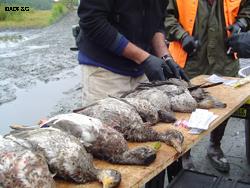 At the opening of the fall waterfowl season, 450 samples were collected from hunter-shot birds at Susitna Flats, Palmer Hay Flats, and Mendenhall Wetlands State Game Refuges.

Robus serves on the national interagency surveillance steering committee and Rothe coordinates primarily with the 11 western states of the Pacific Flyway Council.

“Every state now has some sort of avian influenza sampling and response program,” Rothe said.

So what does it all mean? Will concern over bird flu continue? Are Alaska’s waterfowl now considered flu-free?

Not necessarily, Rothe said. Even though thousands of birds were tested last summer, scientists handled just a small fraction of the millions of wild birds that congregate in Alaska each summer. Rothe said there is still a small possibility that Asian H5N1 is present in Alaska but was missed by sampling.

“We’re somewhat reassured that we looked at 21,000 birds and didn’t find Asian H5N1,” Rothe said. “But we need to be aware that we may just not have found it. You can’t say with 100 percent certainty that we’re clean.”

And what will happen in terms of flu surveillance for next summer?

Sampling plans are not yet clear, though interest in the disease has clearly dampened since last year. Scientists also now believe wild birds are far less likely carriers of the disease than initially thought at the beginning of 2006.

Biologists from Fish and Game and other wildlife agencies are summarizing results of the 2006 samples and sifting the “lessons learned” from this unprecedented national disease surveillance effort. “We expect Fish and Game to sample more birds next year,” Rothe said, “but the extent of our work depends on global trends in H5N1, priorities of federal and state policymakers, and the generosity of Congress.”