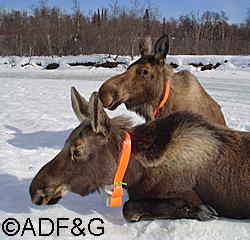 This cow and 10-month-old calf were fitted with radio collars as part of a Fish and Game project to study moose productivity and survival in Game Management Unit 16B.

When the moose population began dropping in Game Management Unit 16B, many hunters and biologists suspected wolves and bears were primarily to blame. But without further study, no one knew if that hunch was correct. Perhaps poor moose productivity, disease, weather conditions or other factors might also be affecting the moose population in this region that stretches west from the Susitna River to the Alaska Range.

In the 1970s and ‘80s the moose population in Unit 16B was estimated to be as high as 10,000 animals. The population is now less than half that, estimated between 3,200 and 4,100 animals. The state has since limited moose hunting in the region to subsistence users only and has implemented programs to reduce the number of wolves and bears.

Thanks to special general funds provided by the Alaska Legislature to enhance game management efforts, the Alaska Department of Fish and Game has finally had the opportunity to address the lack of moose studies in the region. Biologists John Crouse and Tony Kavalok began research in 2005 on Unit 16B moose to address questions about adult female survival, the number of calves born each spring and the subsequent survival of young moose.

Preliminary results from about 85 radiocollared animals suggest moose are healthy and calf production is excellent in the region. So why isn’t the population growing?

From mid-May to early June each year the moose are observed daily by biologists tracking them from Super Cub airplanes. Nearly all of the cows older than two years have been pregnant and twinning rates are high – 50 percent of births over the last two years have been twins.

“We expected moose fecundity to be good, but this was even better than expected,” Mat-Su area biologist Kavalok said.

The high rate of twinning is recognized as an indication of favorable range conditions. Although moose forage has not been directly quantified, other measures suggest moose have plenty to eat in Unit 16B. Crouse has been measuring body fat stores in adult females and weighing their calves at five and 10 months of age.

“The cows are nice and fat in the fall and their calves weigh more than 400 pounds by the time they are five months old,” moose research biologist Crouse said. 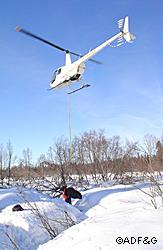 A helicopter is outfitted with a scale and sling is used to weigh a calf in Game Management Unit 16B.

Blood and fecal samples are also collected each time the moose are captured and handled. Analysis of those samples has found no exposure to unusual diseases or conditions. The blood tests also tell the biologists which cows are pregnant.

Monthly flights are conducted to determine how many moose die and when. Last year, not a single collared moose died in the fall and winter. In mid-April, however, biologists tracked two separate mortality signals to find brown bears consuming the carcasses of recently killed cow moose. A few other moose older than calves have died during spring and early summer, but in those cases the cause was not determined.

Crouse said the mortality information indicates that very few adult moose are dying – either from predation or other causes. So why do moose numbers in the area remain so low? Even if severe winters or habitat changes were part of the reason for the initial declines, biologists would expect to see the moose population rebuilding over time given the high birth rates. That has not been the case.

Following the fate of all the calves born to radiocollared mothers is providing some answers. Studies so far indicate very few calves are surviving their first year in Unit 16B, most likely because they are being killed by bears and wolves.

“Fewer than 10 percent of the calves are surviving to five months old,” Crouse said. “There are a lot of calves being born. They’re just not surviving very long.”

Recruitment is barely keeping up with the death rate of older animals, he noted. “The low density population appears to be due to predation,” Kavalok concluded. “Habitat is not limiting at all in the area. Everything is pointing towards predators.”

Aerial wolf control in the unit, approved by the Alaska Board of Game in 2004, has reduced the wolf population from between 149 to 182 wolves to 50 to 70 wolves based on last spring’s estimate. The objective is to have 22 to 45 wolves in the region.

Liberalized bear seasons and methods of take have also increased the annual bear harvest. One might predict that these measures will help the moose population. But because no accurate population estimates existed prior to harvest liberalizations, biologists cannot accurately measure how effective the strategies have been. Biologists also don’t know which predator – bears or wolves – is most responsible for killing moose calves. 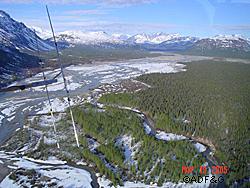 Kavalok hopes to focus more study on bears in the unit. He would like to have a better handle on how many bears live in the area, both black and brown, and learn more about what they are eating. But because much of Unit 16B is densely covered with spruce, birch, and alder thickets, just observing a bear, moose, or wolf from an airplane has proved challenging.

“We will be coordinating a bear census with research biologist Earl Becker next spring,” said Kavalok. “Diet studies are more complex and techniques such as stable isotope analysis could be applied.”

Stable isotope analysis requires tissue samples be collected from both bears and their food items. By comparing carbon and nitrogen isotopes from both samples, biologists can get some idea of what proportion of a bear’s diet is composed of moose, fish, plants or other food.

Crouse and Kavalok’s work also utilizes a new technology involving vaginal transmitters to confirm what they are seeing from the air.

“Observing moose, particularly calves, from airplanes above the forest’s thick canopy is not easy,” explained Crouse.

The biologists began inserting vaginal telemetry devices into pregnant cows last year. The device – a small radio transmitter encased in plastic -- alerts biologists when it has been expelled through a signal received by the aircraft’s tracking equipment.

“If a calf is not observed in the vicinity of the radiocollared cow moose, then we can get on the ground and investigate what happened,” said Crouse.

With one year left in the study, Kavalok and Crouse don’t anticipate any drastic changes in their results. The challenge will be to evaluate what may be done to increase the moose population to meet current objectives. The objective for the unit is 6500 to 7500 animals, with an annual harvest goal of up to 310 to 600 moose.