By Doug Molyneaux and Sara Gilk 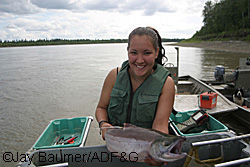 “Text book” sockeye typically lay their eggs in or near lakes. After the eggs hatch, the offspring live in the lake for one to three years, then migrate to the ocean where the young fish live another two or three years before returning to their birth place to spawn and die. But Kuskokwim River sockeye are teaching us that they are not a “text book” variety.

An investigation by the Alaska Department of Fish and Game, in partnership with the Kuskokwim Native Association, National Park Service, Natural Resource Consultants, Inc., and Association of Village Council Presidents, seeks to learn where Kuskokwim River sockeye are spawning, and where the juvenile sockeye are rearing before they go out to sea.

In 2005, Coastal Villages Regional Fund provided seed money for a pilot project whose results prompted a full scale investigation scheduled for 2006 and 2007. Funding for the investigation is from the Arctic-Yukon-Kuskokwim Sustainable Salmon Initiative, with matching funds from Coastal Villages Regional Fund, the Federal Office of Subsistence Management, National Park Service, and the State of Alaska.

In this investigation, biologists are using radio telemetry to uncover some of the sockeye's secrets. About 500 sockeye were caught this year in specially modified fish wheels operated near Kalskag. The fish were helped to swallow a small radio transmitter. The transmitter is a slippery two inch long cylinder that sits in the stomach of the fish. Salmon don't eat while they are migrating up the river, so the transmitter does not interfere with the fish. 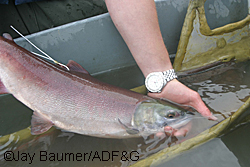 Each transmitter has a unique number, which is like giving each fish a unique name. The transmitter sends out a signal broadcasting that number similar to how a radio station sends out a signal broadcasting music. But you cannot hear the music unless you have a radio to receive the signal. In this same way, the number identifying the transmitter in a sockeye salmon is broadcast continually, but you can only hear the number if you have a "receiver."

Not all sockeye caught in the fish wheels get a radio transmitter. Fish are carefully selected in a way that mirrors sockeye salmon abundance as the run builds, peaks, and then tapers off. The selection also mirrors differences in sockeye abundance between the north and south banks.

Biologists used radio telemetry to track the location of each fish. Every few weeks a biologist gets into a small airplane to survey the Kuskokwim River basin. Holding a receiver in his or her lap, the biologist listens for the transmitter signals of sockeye salmon. Unlike a radio station, the signal broadcasted by the transmitter in sockeye can only be heard over a short distance. When the biologist hears a signal they know they are close to the salmon, and they mark the location on a map. The result is a map that shows where these fish are traveling and spawning.

The investigation is not yet complete, but to everyone's astonishment, only 17 percent of the sockeye have gone to Stony River and Telaquana Lake. The majority of sockeye, 70 percent, are instead going up the Holitna River, and unlike the "text book" sockeye, they are not spawning near any lake. 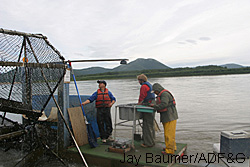 Technician Glenn Lindsey, intern Olin Twitchell and ADF&G technician Simon Abraham prepare to sample a fish on the fish wheel near the village of Upper Kalskag on the Kuskokwim River. Jay Baumer/ADF&G

In recognition of its importance, some village councils are moving to have the Holitna basin established as a Fish and Game reserve. The proposed reserve would be open to hunting, trapping, and fishing, but other development would be limited so as not to harm the fish and wildlife. The groups currently spearheading this initiative are Orutsararmiut Native Council of Bethel and Sleetmute Traditional Council. The Alaska Board of Game has already recognized and endorsed this proposal, and it will go before the Alaska Board of Fisheries for endorsement when the Board meets January 31 to February 5 in Anchorage. Actual establishment of the reserve will take an act of the State Legislature.

Doug Molyneaux and Sara Gilk are Kuskokwim Area salmon research biologists for the Alaska Department of Fish and Game.