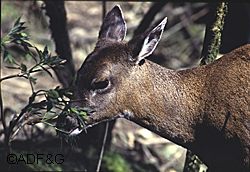 Most natural forbs and browse are loaded with various noxious compounds, and probably the way deer deal with this is by eating a variety of plants.

This summer I watched a Sitka black-tailed deer browsing in the alpine. The young buck with velvety spike antlers bent to nip the heart-shaped leaves off a low-growing lily, then ambled over to a poisonous plant called false hellebore and ate the spike of white flowers off the top.

How do deer eat poisonous plants without apparent ill affect? Wildlife biologist Tom Hanley has researched deer nutrition and said he’s amazed at what deer eat. And not just plants with chemical defenses. Thorny devil’s club leaves are high on the menu and quite popular with deer in summer.

Hanley, a scientist with the Forest Service’s Pacific Northwest Research Station in Juneau, said deer thrive on a mixed diet. These browsers eat the leaves and stems of woody plants and shrubs, as well as forbs – perennial and annual green forest plants. Unlike grazers such as cattle, sheep and bison, they very rarely eat grass.

“Deer will eat a little bit of almost everything out there, including a few bites of various toxic plants,” Hanley said. “There seem to be threshold levels for the toxicity of different plants, and as long as deer eat below that threshold, they’re okay.”

In the spring, deer eat a lot of skunk cabbage, a plant that contains crystals of a poisonous compound called oxalic acid, specifically, crystals of calcium oxalate. Hanley has tasted it, and said even a tiny bit of young skunk cabbage can burn your mouth for hours.

“It’s not like a chemical burn, it’s like there are tiny needles in your tongue,” he said. “I don’t know how it works in their mouth, but they also chow on devil’s club without blinking.”

Deer target skunk cabbage when it first emerges in the spring, eating the yellow flower spike and the green leaves. It contains poisonous compounds, but it’s also rich in protein, critical to hungry deer after the lean pickings of winter. Throughout the summer, they’ll eat the leaves, leaving just the center stem. Geese are also known to eat the leaves, and bears dig and eat the roots.

Hanley said toxicity varies within a plant. Skunk cabbage leaves in summer seem to be less laden with oxalic acid than they are in the spring. With other plants, flowers may be less toxic than leaves or roots. That’s true for false hellebore – the roots are the most toxic part of the plant.

Hanley said there’s probably no one plant deer could subsist entirely on. “Even the best stuff, they’d be hard pressed to do as 100 percent of diet. They need a mixed diet.”

Most natural forbs and browse are loaded with various noxious compounds, he said. And probably the way deer deal with this is by eating a variety of plants, ingesting safely small quantities of toxic plants and focusing on higher nutritional quality plants when they are available. 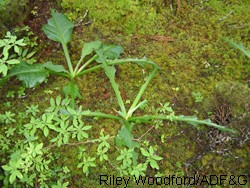 Deer feast on skunk cabbage during the spring and summer, despite the presence of oxalic acid in the leaves. Deer have browsed these leaves down to the watery midrib.

“It really throws a monkey wrench into trying to determine the optimal diet for deer,” he said.

Biologist Dave Person of the Alaska Department of Fish and Game commented that the deer’s mixed diet may help it deal with toxins in their food. Deer will eat more than one type of vegetation in a meal, and the combination of plants in the digestive tract at the same time may minimize or diminish the toxic effects of some foods.

In her article “How do wild herbivores cope with plant toxins,” in a joint publication by the University of Idaho and Washington State University, graduate student Elvia Lopez-Perez reports another dietary strategy. Researchers have found that animals will eat clay or lick minerals from the soil that tend to buffer or bind to toxins and counteract the harmful effects of plant compounds.

Tolerance to plant toxins varies between different animal species. Mule deer are more tolerant of locoweed than pronghorn antelope, and elk are more tolerant of ponderosa pine than bison. Charles Robbins, professor of Zoology and Natural Resource Sciences at Washington State University, said in some cases, this is because of the chemistry of the gut.

Animals such as deer, moose and cows have symbiotic bacteria in their rumen-reticulum (the first two of their four multiple stomachs) that help them break down and digest the vegetation they eat. When moose switch from eating green plants in the summer to twigs and woody browse in the winter, the microbes in their digestive tract adjust, and the microbes better suited to the winter diet become much more prominent. In a similar way, microbial adaptations in the gut can be induced by consumption of small quantities of plant toxins, which can provide an opportunity for the animal’s system to adapt to the toxin. This explains why different individuals within a species may have better tolerances for some foods.

“The rumen certainly helps, in that bacteria are able to detoxify some of those toxins,” Robbins wrote in an e-mail. “For example, some plants have cyanogenic glycosides that can release hydrogen cyanide. Adapted bacteria can take the nitrogen in the cyanide and convert it to amino acids.” The deer then benefit from both the amino acids and from digesting the bacteria themselves as they flow into the other two digesting stomachs.

In other cases, this is related to the anatomy of the animal. Many animals can eat plants that contain neurotoxins because they have slightly different nerve receptors. For example, many squirrels eat mushrooms that are very poisonous to us.

Riley Woodford is an information offficer with the division of Wildlife Conservation and an avid deer watcher.