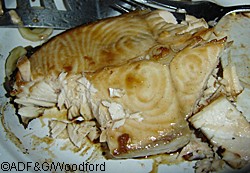 Grilled white king salmon, prepared by Roman Motyka. About one king in 20 has white meat, and many prefer the flavor of the "ivory" kings.

The rich, red meat of a wild Alaska king salmon is a vivid sight. Translucent and buttery, the deep red color comes from pigments in crustaceans in the salmons’ diet. Some king salmon – about one in 20 – have white meat due to an inability to process these pigments in their food. Although these white kings have long been coveted by many Alaskans, the pale meat typically fetched a lower price from fish buyers and was considered commercially less desirable. But now white kings are making a splash in the commercial market.

In past years white king sold for about sixty cents less per pound than the more familiar red-fleshed king, and some fish buyers enjoyed this rarer king salmon for a bargain. Nowadays many believe white king’s flavor is more delectable than their more common cousin. The marketing tide has turned and now the fairer fish, marketed as “ivory king,” brings a higher price.

David Moorehead, executive chef for the Gold Room in Juneau’s Baranof Hotel, laments that the price has gone up over the last three years, “I used to be able to get white king for less than regular king,” he said. “It must have caught on, because the cost has gone through the roof.”

Sherry Tuttle of Rose Fisheries in Sitka said her East Coast customers covet the white king, and they’re willing to pay more for it.

King (also called Chinook) salmon with white or red meat are the same species, Onchorhynchus tshawytscha. From a nutritional standpoint, research has shown the white kings and the red-fleshed kings are identical in composition of lipids, moisture, protein and omega -3 fatty acids, the “good” fats that can protect one from heart disease. But white kings are preferred by many fans of king salmon.

“White king is the best, a true melt in your mouth delicacy,” said Linda Belarde of Juneau.

“It is much oilier and hence, tastier,” said Donald Gregory, an Alaska Native of the Tlingit people. “When home-canned you can really see the difference in the amount of oil produced.” 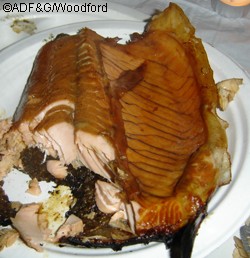 Grilled red king. Genetics, not diet, determines the color of the meat of a wild king salmon, and nutritionally they are identical.

Some sport anglers believe that white kings fight differently once hooked. “When you’re sport fishing and you get a king on, sometimes you can tell if it’s a white because they tend to take off swimming straight down, a red would swim out away from the boat,” said Gregory.

Regardless of how that king fights once on the hook, red and white king salmon look the same when hauled out of the water. It isn’t until the fish is sliced open that the lucky angler learns the color of the flesh. In the past it was believed that white and red king salmon consumed notably different diets, leading to their flesh color distinction. Scientists now believe that variation in flesh color is controlled by genetics.

The meat of a typical king salmon may range from reddish-orange to pinkish-red. These kings have the genetically-determined ability to metabolize pigments in their diet, which are stored in the muscle tissue – the meat. All salmon eat small marine crustaceans (shrimp, krill and crabs) that are rich in astaxanthin, a carotenoid that is found in most sea life. Carotenoids are natural pigments, such as beta-carotene that makes carrots orange, lycopene that provides tomatoes with red color, and astaxanthin, which gives lobsters’ their red shell. White king salmon do not have the ability to metabolize these pigments from their food sources, leaving their flesh white. The ability of salmon to metabolize and store the red-orange pigment carotene in its muscle cells is determined by their genetic make-up.

Just as we pass down traits like eye color, definition of ear lobes and the ability to roll one’s tongue genetically, salmonid parents pass genetic traits to their offspring. The ability to process carotenoids is simply an inherited trait. Research has shown that when two white kings are mated they produce white king offspring, and red kings when mated, produce red kings; much like when two brown-eyed parents have a child, there is a high likelihood that their child will have brown eyes. It’s a bit more complicated when a red king and a white king mate. The ability to process carotenoids is a dominant trait and the inability is determined by a recessive trait. Dominant traits are manifested more often, and so white kings are in the minority. 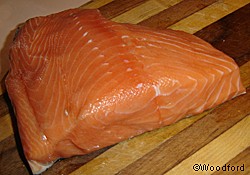 Red and white king salmon look the same when hauled out of the water. It isn’t until the fish is sliced open that the lucky angler learns the color of the flesh.

According to Randy Rice of the Alaska Seafood Marketing Institute, “white kings make up only about five percent of the total king salmon population, the majority of them found in southeast Alaska and British Columbia, Canada.”

In some Southeast rivers, such as the Chilkat, Taku, Unuk, and Chickamin rivers, the genetic pool of white king is concentrated, the population making up 15 to 30 percent of the total king population. An angler has a better chance of catching a white king here than other rivers in Alaska.

As the law of supply and demand suggests, when supply is limited and demand is high, the price of goods increases. Because fisherman cannot provide a steady supply of white king, salmon loving Americans will pay more for white king salmon. Moorehead, of the Gold Room, said, “It’s a novelty and the rule of thumb with novelties is that you can get a better return when there is a high demand.”

Moorehead prepares white king in much the same way he would red king, either baking or grilling the fish. He highlights its distinct flavor by marrying it with “basil pesto, tomatoes and pine nuts or by bronzing it with warming spices such as cardamom, coriander and cloves and quickly searing it for a “Moroccan flair.” He avoids heavy sauces, because he wants to show off that lovely “ivory” flesh that his customers are paying for.