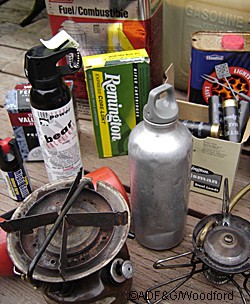 A selection of the "hazardous materials" that can complicate air travel includes bear spray, stove fuel, camp stoves, and ammunition.

Camping gear that many folks consider essential is problematic for airline travelers and requires special handling. Some items are off-limits completely. Getting to remote areas often requires a small charter plane, and the rules are different from commercial airline policies. It’s important to know what to expect before you find yourself surrendering your camp stove and bear spray at the airport before a two-week camping trip.

On commercial airlines, camp stove fuel and all other fuels including gasoline, strike anywhere matches, flares, flare guns and virtually all lighters are not permitted in carry on or checked bags. Bear spray is off limits. Camp stoves and empty fuel bottles may or may not be permitted, depending on their condition. That’s the call of the Transportation Safety Officer – formerly known as the screener – at check in.

The Transportation Security Administration allows ammunition and guns in checked bags, but dictates a few provisions. All firearms must be declared amd must be unloaded. The firearm must be carried in a locked, hard-sided container. The passenger must provide the key or combination to the screener if it is necessary to open the container, and then remain present during screening to take back possession of the key after the container is cleared.

Ammunition must be declared to the airline at check in and securely packed in a wood, metal or cardboard box, or other packaging specifically designed for the purpose. Some airlines allow the ammunition to be in the same case as the firearm, as long as it is properly packed. Black powder and percussion caps used with black-powder type firearms are not permitted.

Bear spray is not allowed. One 4 oz (118 ml) can of mace or pepper spray is permitted in a checked bag, provided it is equipped with a safety mechanism to prevent accidental discharge. (That size is more in the class of personal, anti-mugger-type spray and is smaller than the standard size (7.9 oz) spray used for protection against bears). 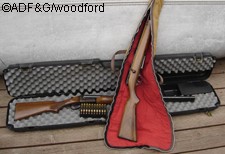 If you need bear spray, the TSA suggests you buy it at your destination and leave it behind when your trip is over. That’s true of your fuel, lighters, matches, fire starters and bear spray – all can be purchased in Alaska.

If you’re headed out into the field to go fishing, hunting or backpacking, chances are good your flammable items and firearms may be loaded with you and your pilot into the cabin of a small charter plane. How does this work? Fortunately, different rules apply to charter aircraft. These materials are all regulated by the Department of Transportation as hazardous materials. Virtually all camping equipment and related gear can be transported out to the field, but are there rules and restrictions.

Ed Kiesel of Ward Air said carriers appreciate the needs of hunters and people preparing to spend time in isolated areas, and they generally try to be accommodating. “Just be sure and let us know what you’ve got,” he said, adding a bit of advice air carriers often emphasize to their customers. “Weight matters. You don’t need to take the kitchen sink. Think twice about whether you need it or not.”

There are basic ground rules for air carriers, said Raven Stewart of Skagway Air, and different carriers may have certification and approval for different hazardous materials.

“Certain companies don’t carry hazmat at all, some are approved and some are not,” she said. “Skagway (Air) can carry hazardous material – it does have to be declared – and some materials can’t be carried on scheduled flights with passengers.”

Vanessa Thompson, with Tok-based 40-mile Air, said carriers are trained and certified to handle hazardous materials. “Call the carrier in advance,” she said. “The majority of hunting and game transporters are going to have it, but even Coleman fuel needs paperwork.”

Bear spray is not permitted in checked or carry on baggage in commercial flights, and charter operators have strict rules about the transport of this potentially dangerous material.

A few items that are off-limits under all circumstances.

“Matchlite charcoal – the kind that’s really easy to light – is forbidden on any aircraft,” said Deb Barry, with Wings of Alaska in Juneau. “Sterno is also not allowed. I remember there was this catering event and someone wanted to fly all these chefs up somewhere, and we couldn’t take their Sterno for the warming trays.”

Guns are okay, said Barry, but they must be unloaded and in a case, preferably a soft case to facilitate packing the plane. Ammunition in its original packaging for personal use is okay, but it can’t be in the same case as the gun. Since commercial airlines want firearms in a hard-sided case, it’s best to also bring a soft case for that final leg of the journey. Your charter pilot will really appreciate it.

Propane canisters require paperwork, but can be carried. Camping stoves, stove fuel and even gasoline are permitted, depending on the quantity (for more on camp stoves and airlines, see the next article).

“Bear spray is a big one, it’s dangerous,” said Stewart of Skagway Air. “We can do it, but we really prefer not to. Typically speaking, most carriers won’t allow it. You don’t want that going off in an aircraft.”

“We really try to have them leave it behind,” said Vanessa Thompson, with 40-mile Air.

Ed Kiesel of Ward Air pointed out that floatplanes are very different, because of the storage outside the cabin. “We have hatches in the floats, and fuel and bear spray go in the floats.”

Riley Woodford is a writer with the Alaska Department of Fish and Game, based in Juneau. His remote camping has been aided by the abundance of floatplanes in Southeast Alaska.