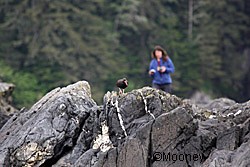 I scan the shoreline through binoculars as we cruise the perimeter of the rocky island. We hear the familiar loud, piping alarm call before spotting a lone black oystercatcher perched conspicuously atop a rock. The sentinel, having sounded the alarm, quickly leaves its perch to lure us away. Somewhere nearby we are sure to find its mate, most likely sitting atop a nest.

Phil Mooney, Sitka area biologist with the Alaska Department of Fish & Game, slows the outboard of our inflatable zodiac. The boat approaches the shoreline as swells crest and break against the steep rock walls. Mooney times the boat’s approach as the swell rises above horizontal bands of barnacles and mussels. I have just enough time to leap onto the rocks.

Once onshore, I take a moment to observe the sentinel’s movements. Often one only needs to go in the opposite direction of the sentinel to come upon its mate concealed amongst the rocks. Clambering over boulders, I see a second bird take flight, marking the likely location of a nest. I search the gravel and finally spot it. Barely above the high tide line, exposed to all of the elements, are three speckled eggs laying in a scrape adorned with broken pieces of white shell. Though it is completely out in the open, the oystercatcher nest is nearly invisible.

The pair’s commotion and my continued presence stir up scores of gulls and at least a dozen other oystercatchers. The aerial chaos makes it extremely difficult to determine where to even begin looking for the remaining nests. After an hour of searching, I find only two more nests. The tide is falling, the seas are picking up and we’re losing daylight. We load the zodiac back onboard the landing craft and head for a cove where we will spend the night before heading out again the following day to look for more nests.

Black oystercatchers have been identified as a species of high concern by federal and state agencies and conservation organizations in the U.S. and Canada. The total population is less than 11,000 birds, making it one of the rarest shorebirds in North America, and the status of the population is unknown. They range along the Pacific coast from Baja to the Aleutian Islands, but over 65 percent of the global population resides in Alaska.

These large, blackish birds with long red bills and bright yellow eyes live exclusively in the upper reaches of the intertidal zone. The breeding habitat of black oystercatchers is also associated with the high tide margin of the intertidal zone, usually where there are nearby mussel beds. Using their flattened long bill, oystercatchers pry open mussels, limpets and other invertebrates. They nest on gravel and shell beaches or on rocky islets that are not heavily forested.

Their year-round dependence on this narrow band of habitat makes these birds particularly vulnerable to both natural and human disturbance. Predation by mammals, such as mink, river otters and bears, as well as by gulls, ravens, and eagles takes a toll on oystercatchers, particularly on the eggs and newly hatched chicks. Because their nests typically crowd the high-tide margin, they are extremely susceptible to flooding by extreme high tides, storm surges, and large boat wakes. Because recreating humans tend to prefer the same gravel beaches vital to breeding oystercatchers, campers and kayakers may inadvertently disturb nesting birds or even trample their highly camouflaged nests. 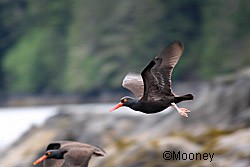 A black oystercatcher in flight. Photo by Phil Mooney

Coastal contamination can severely impact oystercatchers. After the 1989 Exxon-Valdez oil spill, 20 percent of the oystercatchers in the spill area were killed immediately by oiling. Birds not directly oiled were faced with eating oil-contaminated prey or starvation.

“The oil spill had devastating short-term impacts, and as we are finding out now, long-term impacts as well,” said David Tessler, a research biologist with the Alaska Department of Fish and Game. “Some current research shows that oystercatchers are still carrying physiological effects from feeding on prey in oil contaminated areas.”

Tessler points out, “In the aftermath of the infamous oil spill, wildlife managers realized just how little we really knew about this highly conspicuous species. Virtually nothing was known about their population size, status, life history, productivity, threats, demographics, or even migratory movements.”

Here in Alaska in 2003, several agency scientists and conservation organizations founded a working group to exchange information on the current state of research on this species, define future research priorities and coordinate efforts across the state. Just a year later, the International Black Oystercatcher Working Group was formed, bringing scientists together to address research and management for oystercatchers across their entire range. The Alaska Department of Fish and Game took the lead in coordinating new cooperative studies on productivity, survival, genetics, and seasonal movements, all of which are currently underway. Tessler has ongoing research and monitoring programs in Prince William Sound, on Middleton Island, in Kenai Fjords and Glacier Bay National Parks, and with Canadian collaborators at locations in British Columbia.

“We are going to know so much more about this bird by the end of 2006 and 2007,” said Tessler. “At that time, we will have a pretty good handle on this species.” This information from these studies will inform a new range-wide conservation plan for oystercatchers that Tessler and co-authors at the US Fish and Wildlife Service plan to complete by October 2006.

There has never been a population census for black oystercatchers, and the only population estimate ever done used spotty data collected incidentally during sea-bird surveys. Given the limitations of that 15-year-old estimate, biologists would like to know the actual population. “Even if the population is twice the original estimate, oystercatchers are one of the rarest birds in North America,” Tessler said.

Over the last five years, the Forest Service conducted an oystercatcher survey for Prince William Sound. But surveying Southeast Alaska is quite another matter. Because there are over 15,000 miles of shoreline in Southeast, it would be virtually impossible to survey the entire coastline. But knowing something about oystercatcher “hot spots” would make it possible to survey and monitor only the most likely areas. 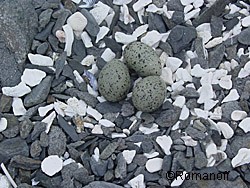 Oystercatcher eggs and a nest, a subtle depression hollowed out on the beach. Photo by Phil Mooney

The survey trip that I participated in along the outer coast of Baranof Island was part of that larger effort to find important oystercatcher breeding sites. It was one of five preliminary surveys in Southeast Alaska conducted by the Alaska Department of Fish & Game this summer to locate oystercatchers and determine their breeding densities.

A handful of island groups on the outer coast were targeted for these surveys; remote rocky islets with gravel beaches, relatively free from human-caused disturbances and free of most predators. Pairs of biologists conducted the Southeast surveys in mid-May through June after eggs had been laid, but prior to chicks hatching.

While isolated islands with several nesting pairs on each were found, we have not found breeding densities comparable to those found in Prince William Sound, Middleton Island, Glacier Bay, or Kenai Fjords.

Once anchored for the night, Mooney and I talk about the possible factors influencing the relatively low number of breeding pairs we’ve found so far. He reminds me that although we are not finding a treasure trove of oystercatchers we are still uncovering valuable information about the choices that oystercatchers are making in determining where to breed. Are there more predators in the areas we surveyed? Is kelp too prevalent for mussels to become established? Is there not enough nesting habitat? Are we just not seeing them against the dark rocks? All of these questions and more arose as we scanned miles of shoreline. Many of these questions may be answered once the data we collected is fully analyzed.

The following morning, we find a few more nests before continuing north toward Sitka. We note the changing character of the islands. Shorelines are increasingly surrounded by a thick buffer of kelp with few, if any, mussels growing on the rocks. Several islands are forested with vegetation growing right to the shoreline and eagles perched in the treetops. We see little in the way of nesting habitat, but whenever an oystercatcher is spotted, we take the zodiac ashore for a look. Making my way towards a potential nesting area, I come nose to nose with a mink scampering out from beneath a rocky crevice. If there are any nests with eggs nearby, this clever weasel will likely make a meal of them.

For the remainder of this trip no other nests are found. Our rain-dappled notes about the islands begin to piece together a better understanding of where nesting oystercatchers may be found. While this project provides biologists with but a fraction of the data necessary to build a complete picture of the breeding habitat for black oystercatchers, it is a piece of the puzzle. Over time, these collaborative efforts will build upon each other and will provide the information necessary to conserve this poorly understood species throughout its range.

Kristen Romanoff is a naturalist and outdoorswoman and works as an educator with the Alaska Department of Fish and Game. She is based in Douglas.