A Crisis in the Making in Northwest Alaska;
Caribou, Hunting Pressure and Conflicting Values 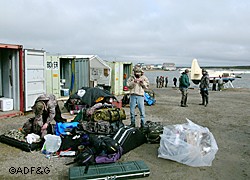 Hunters prepare for departure with one of the non-local transporters that operate out of container vans at the Kotzebue Airport during the hunting season.

A yearly problem is about to unfold again in Game Management Unit 23; the Kotzebue region of northwestern Alaska. And the hunting and wilderness experience of a variety of user groups hangs in the balance.

Broadly, the problem is about what happens when different perspectives on hunting collide and access to wilderness, wildlife, and hunting opportunity is insufficient to meet everyone’s needs. More specifically, it is about the increasing number of guides, transporters and visiting hunters converging on northwestern Alaska during the short fall hunting season — at the same time that local subsistence users (who have hunted in the region for generations) are getting their winter meat. The problem also embraces the issue of wasted meat, and the fear that too many people can love a very special place into ruin.

Each fall the Kotzebue airport is awash in camo as hunters from across the state, the country, and overseas arrive in hopes of bagging a trophy moose, caribou, sheep or grizzly. Many of these hunters have saved for years to make this once-in-a-lifetime hunting trip to Alaska — to experience the Alaska wilderness they have only known through books, magazines and television.

In addition to the hoped-for trophies, they have also come to escape the city or suburbs, their office, the traffic, the pollution, that ‘other life’ — if just for a little while — to renew themselves in the wildness of northwestern Alaska. “I’ve planned and saved for this hunt for three years,” says Brad Gray, a hunter from Pennsylvania. “It cost me $15,000 and it was worth every penny of it.”

While some would like to take home the meat, they have admittedly come for the trophies. “I wanted to keep all of the meat but it costs $130 just to ship 50 pounds of it to Philadelphia,” continued a frustrated Gray. “I would like to take the whole thing if I could. I had to pack 1,000 pounds of meat 1 ½ miles uphill just to give it away.”

The local people, primarily Inupiat Eskimos, grow up living, traveling, fishing and hunting in this country. To them it is not so much wilderness as it is their home and the source of the fish, game, greens and berries that fill their freezers.

They are meat hunters, generally leaving behind the racks—large or small—in the field with the gut pile. Each fall they watch in disbelief as pallet after pallet of antlers—and very little meat—disappear into the bellies of Alaska Airlines jets. “I see these guys on a daily basis. ‘Okay, where’s your meat,’ I ask them? No meat. Just antlers,” complains an Alaska Airlines cargo agent.

The local Inupiat have also grown from weary to angry over the escalating number of planes passing over their camps. They fear that the heavy air traffic, and the number and locations of non-local hunting camps, are disrupting the migration patterns of the Western Arctic Caribou Herd.

“Our people depend on that food,” says Ross Schaeffer, Northwest Arctic Borough mayor. “Our whole culture here is based on sea mammals and caribou.”

There are big-game guides who have operated in the region for years, who are financially as well as personally invested in the long-term welfare of the wildlife populations and in a peaceful coexistence with local residents. But as non-local guides and transporters bring an increasing number of hunters into the region, they see changes that threaten their livelihood and lifestyle.

This meat sat in the sun on this pallet for three days. There are no meat processors or storage freezers available for hunters in Kotzebue, contributing to the meat salvage problems.

Most guides handle relatively few hunters but make their living by selling a high-quality hunting experience to their clients. For them this means being able to locate large male animals in uncrowded hunting conditions. They feel those opportunities are rapidly diminishing in Unit 23.

Phil Driver has guided out of his camp on the Wulik River for many years. He complained that last year, “It was unbelievable on the Wulik. Five transporters kept bringing people in. They had seven to eight tents set up right on the crossings. The herd never came from the calving ground to the coast. Never before in 40 years – I used to see thousands.”

Transporters earn their living by dropping off and picking up hunters; and the more they transport the greater their revenue. While some transporters are based in Kotzebue, many come from other parts of the state just before the hunting season and set up temporary ‘offices’ in tents and shipping containers alongside the Kotzebue airport tarmac.

Transporters tend see themselves as entrepreneurial Alaskans exercising their individual rights. “Alaska belongs to the people. It’s here for all the people,” explained an employee of Mavrik Aire.

Some transporters have a long history of operating in specific areas and, like the long-established guides, are invested in the health of the wildlife and good relations with local residents. These transporters recognize that there are others within their profession that, while operating legally, are strictly motivated by profit, and transport very high volumes of hunters to the detriment of local hunters and commercial operators.

So what about all that meat?

While appalling to all ethical hunters, some meat is indeed left behind in the woods to rot and is found later by local people, law officers, wildlife biologists or other concerned hunters. Often it is impossible to track down the responsible parties.

Some visiting hunters manage to get to a village in time to offer meat to local residents, although it is not always in edible condition. “They killed moose and caribou. It was warm and wet and they had their meat in plastic bags. It was the worst case I ever saw,” said Driver, of the meat being carried downriver in a hunter’s raft.

Reputable guides and transporters manage to get meat back to Kotzebue or nearby villages in good condition, and within minutes an announcement goes out on local radio that there is meat for the taking. There are local Inupiat without a hunter in the family who are grateful for the free meat—even though they are baffled why someone would shoot a moose for any reason other than meat. “Not all of us think this is a bad thing,” said an elderly woman picking up some meat. Additionally, some airlines will voluntarily fly unwanted meat out of Kotzebue to Anchorage, where it is used in programs to feed the disadvantaged.

Unfortunately, there is also the meat that is found tossed in the dumpsters of local Kotzebue businesses, left to rot on wooden pallets on the tarmac, hung in shipping vans with no air circulation, or found hidden in the bushes outside of town. Local residents have reported seeing hunters and transporters tossing unwanted meat into the ocean or nearby lagoons. 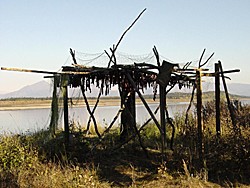 A traditional meat drying rack at a campsite that has been used for many generations.

And while some hunters were never interested in keeping the meat, those that do face the dilemma that there are no freezers or meat processing services available in Kotzebue, and their flight home may not be for several days.

With such high numbers of visiting hunters and commercial operators, wildlife managers are concerned about maintaining trophy bulls in a game management unit with generally low densities of moose. However, with the Western Arctic Caribou Herd approaching half a million animals, they don’t have a biological concern where caribou are concerned.

Nonetheless, Jim Dau, an Alaska Department of Fish and Game wildlife biologist who has been in the region for more than 15 years, is hearing more and more complaints from non-local hunters about over crowding and increasing air traffic, which echo those that local residents have been voicing for years. As competition among guides and transporters increases, he also receives more reports of unethical and illegal activities as well. He fears that one of Alaska’s premier hunting opportunities is threatened by overuse. “It’s one of the last best places going down the tubes,” he mourns.

“This situation has played itself out over and over again throughout Alaska,” Dau said. “An area is ‘discovered,’ and the pressure from commercial operators and visiting hunters increases. Once the number of trophy animals are depleted they rarely recover, and stringent regulations get imposed that tend to persist. Commercial operators who are in it for the short term simply move on.”

The search for solutions continues

Alaska’s wilderness and wildlife are not unlimited, and demands on it are increasing. The heart of the problems in Unit 23 is not that most visiting hunters and commercial operators are irresponsible: most are responsible and ethical. But there is a growing concern that too many good, responsible hunters are still too many, and that numbers now exceed what most locals and some non-locals consider acceptable.

The Alaska Board of Game has begun to tackle the problems in Unit 23, but is limited in its jurisdiction. Federal land management agencies in the area are considering options for controlling access, but transporters typically fall outside of their jurisdiction. The Big Game Commercial Services Board is aware of the situation in Unit 23 but is so new that it has not yet had time to begin to address it.

The Northwest Arctic Borough wants to see a greater law enforcement presence during the hunting season, but the number of available troopers is limited. “Enforcement is the key,” said Schaeffer. Despite being spread thin across the state, the troopers plan to have a greater presence this hunting season.

And there is the long-standing debate in Alaska over who — if anyone — should have priority access to game. Add to all this complexities of land ownership and game allocation between the state and federal regulatory systems, and there is indeed a crisis in the making; one that must be solved before it’s too late. Far too much is at stake for far too many.

Sue Steinacher is an educator with the Alaska Department of Fish and Game in Nome, and a longtime resident of the north.