The Kenai River King Salmon Classic and the Golden North Salmon Derby are two of the better known derbies held each year. By comparing these two fishing contests, the differences in the anglers who participate and the ways they raise money, the intent of Alaska’s derbies may become clear.

The Kenai River Classic is the leading fundraising fishing contest in Alaska. In its 13 year history the classic has raised millions of dollars for education, habitat and access through participant fees, sponsorships and auction proceeds. As with most of the fishing derbies in Alaska, contestants in the Kenai Classic keep the fish they catch.

This year, Sen. Lisa Murkowski landed the second largest king salmon (63 pounds) during the classic. The Senator is a staunch supporter of sport fishing.

“Derbies and events across the state help raise significant resources to support local fisheries and conservation efforts,” said Sen. Murkowski. “In addition they help bring visitors to the state while providing Alaskan anglers the opportunity to show off their fishing prowess…and luck.”

The Kenai River Classic is sponsored by the Kenai River Sportfishing Association. According to the association, the 2006 Kenai Classic raised more than one million dollars in contributions, and generated over $350,000 in revenues directly to Kenai Peninsula businesses. The classic has become one of the largest volunteer driven fundraising events of its kind, with more than 200 community volunteers donating hundreds of hours to help raise money to protect the Kenai River watershed. Many local businesses and individuals also generously donate their services and auction items to the classic.

The Golden North Salmon Derby, held each August in Juneau, is one of only four sanctioned sport fishing derbies where anglers turn in their fish to generate dollars. The Territorial Sportsmen sponsor the derby and sell all qualifying fish to raise money for their scholarship fund. Thousands of anglers buy tickets and turn in king and coho salmon during the three-day derby in early August. Since 1953, funds raised from the Golden North Salmon Derby have allowed the Territorial Sportsmen to provide more than a million dollars in college scholarship aid to more than 200 students. The 2006 Golden North Salmon Derby will be held August 4,5,6 in Juneau, with the first place fish worth over $10,000 and specially tagged fish (if landed) bringing the lucky angler $100,000. 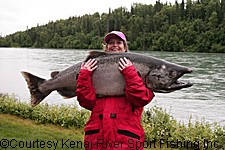 The Golden North Salmon Derby is a Juneau tradition, with dozens of volunteers working the docks to tie-up in-coming boats and weigh fish. Thousands of hours are volunteered each year to organize all phases of the competition, and donations from area merchants and businesses routinely exceed $100,000 annually.

Dozens of opportunities for anglers to compete in fishing derbies have sprung up around Alaska in recent years. Four of the older derbies – the Golden North Salmon Derby, the Seward Silver Salmon Derby, the Haines Sportsmen’s Association King Salmon Derby, and the Sitka Sportsman’s Association King Salmon Derby – are authorized to accept angler’s catches for re-sale. Under a policy adopted by the Board of Fisheries, the newer derbies may not commercially sell sport-caught fish. However, proceeds from the sale of tickets may be dedicated to a variety of worthy causes, including education, fish habitat restoration and angler access. The success of angling contests may be measured in funds raised or in the smiles on the faces of the thousands of anglers who participate.

Most communities in Southeast hold some form of derby during the summer months. In Southcentral, fishing derbies don’t stop with freeze-up. Ice fishing derbies are scheduled for mid-winter when the ice will support the greatest number of anglers. So many contests occur in and around Anchorage that the Department has prepared a handout for anglers listing these events. Contact your local ADF&G Sport Fish office for details on fishing derbies near you.

Jon Lyman of Juneau is an information officer with the division of sport fish at the Alaska Department of Fish and Game.