Anglers fishing off the rocks at Picnic Cove near Juneau have been known to throw rocks at boaters who troll too close to shore. A few basic rules of courtesy can insure harmonious fishing even in popular areas. ADF&G photo.

The 20-pound test monofilament lines glisten in the early morning light and disappear into the water at the perfect angle off the port and starboard sides. The kicker mumbles and pushes my open skiff gently along as the rod tips nod rhythmically from the slow rolling cut-plugs 25 and 35 pulls below. We have custom, hand-tied leaders with # 4 hooks – just sharpened. It's 20
minutes before the tide change and we're just off shore in 115 feet of water. Fishing conditions are perfect. Anticipation piques as we begin to approach my favorite stretch along the rocky shore, where several times before, hungry kings and cohos have sent me lurching toward my rod to set the hook.

Then, a big fiberglass 34 footer (with "My Roth IRA" or "Daddy's Hobby" or some other clever name on the transom) roars by. Its wake sends my coffee cup crashing to the deck and nearly launches my dog Middy, standing with her front
paws on the small triangle of aluminum in the bow, overboard. My friend, slumped in her seat with eyelids half closed, snaps to, grabs the gunwale for stability as we rock violently in the trough, and mutters words that her toddler has never heard. The skipper of "Midlife Crises" (or some other clever name) smiles and waves as they pass and then throttles down so close to my bow that I could probably hit one of his cockpit passengers in the head with my coffee cup.

Situations like this make it apparent that not everyone abides proper fishing etiquette. Unlike golfing (The US Golf Association's Official Rules of Golf contains 224 pages on rules and Etiquette – playing a game without committing some faux pas is nearly impossible) fishing etiquette doesn't usually create conundrums for Miss Manners to solve. It's a fairly straight forward ethic of reciprocity, also known as the Golden Rod, which espouses, "don't do to other anglers what you don't want done to you" or "love your fellow fishermen as you love yourself."

Perhaps the skipper of "On Sick Leave" (or some other clever name) doesn't notice when someone cuts them off from their favorite fishing hole. (Is this the same person that keeps leaving beer bottles on the beach, TP along my favorite hiking trail, trash and cans in the fire ring at public picnic spots, and dog poop in the playground? I always wonder if the folks that do these things feel imposed upon or disgusted when subjected to similar deeds.) 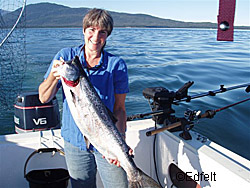 This last spring, my friend Larry Edfelt, aboard his boat, "Clever Boat Name," was playing a nice king when another boat motored over too close to watch him land his fish. When those on the other boat finally realized that Edfelt was not hollering salutations, they hauled in their downrigger and gaffed Edfelt's entwined king. They did hand the fish over to Edfelt, but he never got to play his fish or even net it.

Most folks who have spent much time fishing in marine waters have had others push them off their turn on the preferred inside line, come too close while playing a fish, nearly hit their boat or anchor line, or create havoc with their wake. While most charter operators and private boat owners behave responsibly, these problems are not uncommon.

A bad day fishing is suppose to be better than a good day at work, so let's keep it that way, especially during fishing derbies when there can be hundreds of boats on the water and many people fishing from shore. Remember the Golden Rod and always:

Minimize your wake effect on others, especially smaller craft

Give someone playing a fish plenty of room

Know and abide by the rules of the road for navigation

Don't motor inside of casting distance from those on shore

In short, be responsible, respectful, and reasonable.


Nancy Long is an avid angler and hunter and works as an information officer with the Alaska Department of Fish and Game.