The Biggest Bear ... Ever 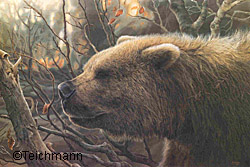 You are watching a pride of lions gorging on the still-warm carcass of a young elephant. Wild horses graze nearby, wide ears active, great marble eyes rolling nervously toward the preoccupied cats. Suddenly the lead stallion raises his head and snorts in alarm. His harem of mares dance in sudden agitation, staring off in the distance. Slowly climbing over the horizon, a looming form approaches at a steady pace. As one, with the synchrony of a wheeling flock of birds, the herd bolts. The lions grumble deep in their throats and rise to stand at point.

The animal is closer now. Close enough for you to realize that it is the largest bear you have ever seen. You crouch frozen, adrenaline coursing through you like a rushing river. You are transfixed by the size of this beast. As the bear passes, its odor fills your nostrils, the rotten-flesh stench of a carnivore.

The lions, heads low, a steady growl of warning rumbling from within, turn to block the carcass, to face off against their nemesis…

Just another tale of survival in the Alaska wilderness. But wait. Lions, wild horses, and elephants in Alaska? You bet. During the Pleistocene epoch (from 1.8 million to 10,000 years ago) all of these creatures roamed the grassy steppes that would later become the boreal forests of Interior Alaska. In fact, the confrontation between the pride of steppe lions and the short-faced bear (Arctodus simus) over that mammoth carcass could have easily taken place where the University of Alaska Fairbanks campus sits today.

This is strangely appropriate, since several mysteries surrounding this bear were solved within a bone-filled, dusty lab of UAF less than a decade ago. Paul Matheus, then Director of the Alaska Quaternary Center, challenged some long accepted beliefs about the life history of this mega bear. Thanks to his research, we now may know what Arctodus ate, how it procured its food and even the most plausible explanation for its sudden disappearance a scant 12,000 years ago.

The short-faced bear first loped into paleontological prominence in 1967, when Dr. Bjorn Kurten of the University of Helsinki authored a paper entitled, Pleistocene Bears of North America. Kurten wrote that Arctodus was “…by far the most powerful predator in the Pleistocene fauna of North America.”

Though Dr. Matheus is quick to express his deep respect for Kurten’s work, to the point of reverently referring to the world renowned Finnish paleontologist as the “bear god,” he does not agree with Kurten’s conclusion that the bear was a formidable predator.

Quarternary biologists, who study the life forms of the Pleistocene, encounter a range of obstacles when trying to determine what ecological niche an extinct animal may have occupied. They can’t climb a hill and make observations through a spotting scope. They have to rely on evidence left behind, mainly bones.

The bones that individual short-faced bears left behind tell us that this bear ate meat. The skull has a shortened snout and powerfully built jaws that could crush bone. Matheus says that Arctodus’ canine teeth were well suited for puncturing tough hide, and its large, jagged molars were ideal for gnawing, tearing, and slicing meat.

These physical attributes, alone, however, are not sufficient to prove that the short-faced bear was a true carnivore and not an omnivore, as are today’s modern grizzlies and black bears. Matheus used a technique called “stable isotope analysis” to quell any doubts about Arctodus’ diet. Simply put, nitrogen occurs in nature in two forms, nitrogen-15 (15N) and nitrogen-14 (14N). The ratio of 15N to 14N in a bone sample can tell researchers whether an animal was a carnivore, an herbivore, or an omnivore. Matheus found a very high 15N to 14N ratio in all the Arctodus bone samples he tested. This nitrogen “signature” is indicative of a true carnivore. Thus, the stable isotope analysis when coupled with the physical characteristics of fossil skulls and teeth leaves little room for argument: The short-faced bear ate only meat.

“Arctodus weighed about 1,600 pounds to 1,900 pounds,” says Matheus. That’s roughly twice the weight of the average modern Alaska coastal brown bear. “On hind legs, it stood 8 feet to 10 feet tall.” Even on all fours, Arctodus could look a 6-foot man in the eye. It’s tempting to assume that, since this bear was such an outsized carnivore, it was the alpha predator of its time. It isn’t difficult to imagine Arctodus pulling down woolly mammoths or steppe bison, or crushing the spine of a Pleistocene moose with one swipe of a sledgehammer paw. But, the ancient bones that Matheus studied, whispered a different story.

“There are two lines of thinking about Arctodus as a predator,” Matheus explains. “The first I call ‘The Linebacker Hypothesis.’ It envisions a mighty brute that overwhelmed the largest mammals of the Pleistocene. The bear supposedly used its massive body to tackle things like mammoths and giant ground sloths. The problem with this idea is that Arctodus, though very large, was very gracile (light-boned). In order to bring down these magafauna (large animals), Arctodus would have to have been a more robust creature sporting thicker, stronger bones.”

Matheus calls the second theory, “The Cheetah Hypothesis.” Some believe the long-legged Arctodus was able to run down smaller, fleet-footed Pleistocene herbivores such as steppe horses and saiga antelopes. In this scenario however, the short-faced bear’s sheer physical mass would be a handicap. “Size works against you in developing speed,” notes Matheus. “Once an animal tops 320 pounds to 400 pounds, additional weight sacrifices speed. Furthermore, Arctodus’ skeletal structure does not articulate in a way that would have allowed it to make quick turns, an ability required of any predator that survives by killing agile prey.”

After studying the skeletal record, Matheus determined that Arctodus was a pacer. That is, both of its right legs moved forward together, then both left legs moved forward in unison. This is the primary means of locomotion for elephants and camels. Pacing isn’t particularly fast, but it is very energy-efficient. An animal that is built for pacing is designed for endurance rather than speed.

So where does this leave Arctodus in the grand Pleistocene scheme? This monster ate only meat, yet it seems to have been ill equipped physically as a hunter. Matheus believes the answer is clear, and reflects some recent theories concerning another prehistoric monster, Tyrannosaurus: “Arcotdus,” he claims, was a scavenger.” The largest bear to have ever paced the earth depended upon other predators to make the kills it needed to survive.

“Arctodus located carrion by rising up on its hind feet and sniffing the air,” Matheus surmises. “Standing is something to which its skeleton was well suited.” The tall bear’s upright posture would have placed its wide nose high in the air, allowing it to detect even far off food sources. Arctodus could then drop down on its lanky legs and pace steadily, tirelessly, to even distant kills. Once there, the bear probably used its size to intimidate lesser carnivores and drive them away from their prey.

The short–faced bear was, in this way well-suited for survival in Pleistocene Alaska, but its fate may have been inextricably linked to the climate of that age. The warming temperatures that caused the great glaciers sheeting much of the North American continent at the time to recede also gradually transformed the arid, grassy steppes of Interior Alaska into the boreal forests of today.

The steppe horse, woolly mammoth and saiga antelope, as well as the predators that brought them down were grassland creatures and thus slowly disappeared as the forest took over their grassland habitat. The great bear could not scavenge enough food to support its mighty bulk. Unlike its cousins, the cave bear, grizzly, and black bear, Arctodus could not supplement its diet with fruits and vegetation. In the end, Alaska’s mightiest carnivore was essentially done in by trees. The same trees that so altered the grassland habitat that prey animals and their predators went extinct, left nothing for the great bear to scavenge.

The bear stands on its hind legs, emphasizing its size. It is the tallest thing on the steppe. Your knees quiver, you try to quiet your breath, your heart. The lions crouch, tail-tips wriggling. Suddenly the monster slams its weight down on lanky front legs and charges the waiting defenders. The dominant lion dodges and tries a lunge from the side, but the bear swings one massive paw and the cat is gone, tumbling and bouncing like a rock chucked across the grass. The remaining felines snarl, lips drawing black lines above razor teeth, haunches trembling in indecision. Injured, the downed cat struggles to its feet, hobbles off dragging a hind leg, and the rest of the pride breaks from the kill to follow. Arctodus moves in on the mammoth carcass. As you slink away, stepping carefully, the sound of cracking bones hurries you across the steppe.

You head for home, too shaken to resume hunting now. There will be time to try again tomorrow, for this new land you entered a season ago abounds with game. The grasses are green and lush. And between the waving blades, a new growth is emerging. Its woody stems support spade-like leaves that quake hypnotically in the breeze. You pause to wonder at them, then lay down your spear and allow the heavy bison hide to slide off your shoulders. After all, it is an unusually warm day.

For more information about the short-faced bear and other amazing Pleistocene animals, visit www.beringia.com.

Nancy Sisinyak is an information officer with the the Alaska Department of Fish and Game, Division of Sport Fish, and lives in Fairbanks.