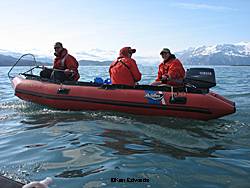 “A pair, two o’clock!” The engine on the Zodiac revs, the “netter” drops his spotlight and grabs the net as the “spotlighter” fixes the two birds in her light beam. The driver speeds ahead in the dark, the “netter” lunges and, as if it were easy, we’ve captured a Kittlitz’s murrelet. Carefully removing the small seabird from the net, we hurry to place it in the carrier box. Hearing the mate calling from nearby, we quickly scan the water with spotlights and as if covered in reflective material, the mate flashes in the darkness as the light captures its outline. Acting quickly, we prepare to scoop the second murrelet.

Due to substantial, rangewide decline in populations, the U.S. Fish and Wildlife Service (USFWS) listed the Kittlitz’s murrelet (KIMU) as a candidate species under the Endangered Species Act in 2004. Biologists hope to learn more about this small seabird (also known as Brachyramphus brevirostris) in an effort to gain insight to what is causing their decline. USFWS biologist Michelle Kissling, and National Park Service biologists Mason Reid and Scott Gende hope to learn more about this small seabird to gain insight into potential causes for their decline.

“The Kittlitz’s murrelet is one of the rarest and least understood seabirds in the world,” Kissling said. “During the breeding season, birds’ range from the Okhotsk Sea, throughout the Bering Sea, along the coast of Alaska and into southeast Alaska. However, few nest records exist, leaving many unanswered questiuons.”

I had the good fortune to join Kissling, Reid, and “technicians” Steve Lewis, Keri Edwards and Ajax Eggelston aboard the USFWS vessel, M/V Curlew, in Icy Bay this spring. Our primary goal was to capture and attach radio transmitters to 15 Kittlitz’s murrelets. Weighing just a bit more than a penny, these transmitters send out a specific frequency signal for 80 days. This would be the first field season of a long-term study, with the primary objective to locate nesting Kittlitz’s murrelets.

The 18,008-foot, snow covered Mt. St. Elias loomed over Icy Bay and the Malaspina Forelands as we motored in to the bay on a gorgeous day in late May. St. Elias was aptly named by the Tlingit, “Yaas'éit'aa Shaa”, which means "Mountain behind Icy Bay." The mountain shoots up out of the tideland at the head of the bay. It is the second highest mountain in both the U.S. and Canada, and provides a formidable landscape for a week of field work.

At the first sign of twilight we prepared for our first night of work on the water. Outfitted in Mustang suits (anti-exposure suits with short-term floatation capability) and plenty of warm clothing, three people boarded each inflatable boat and headed off into the dark. After wishing each other luck, the two boats proceeded in opposite directions from the Curlew.

Each person in the 15-foot-long inflatable boat had a vital role in our goal of capturing murrelets. At the front of the boat sat the “netter,” with the “spotlighter” behind and our boat driver at the helm. I had the distinct role as spotlighter. My job was to sweep the surface of the water with the spotlight in order to see foraging birds sitting on the water in the dark. Kissling said that when a murrelet was hit with the spotlight or “spotted” it would light up. 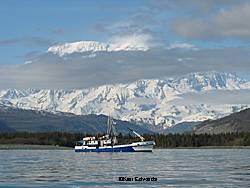 The Curlew in Icy Bay, with Mt. Saint Elias behind. Photo by Keri Edwards

“You’ll know it when you see one,” she said.

Although Kissling was right about the “lighting up” part, you can’t capture what you don’t see. We’d been on the water nearly and hour and spotted only glaucous-winged gulls, a raft of scoters, and chunks of ice that had floated out of Taan Fiord (we started calling these chunks “ice murrelets” because they tricked us so often), but not one genuine murrelet. And even though our capture plan sounded easy enough; “see murrelet, zoom up on murrelet, scoop murrelet,” I knew the previous year only one bird had been captured using this same technique.

I have to admit, I was a bit skeptical. After more than an hour of puttering around the bay, sweeping the surface of the water with my spotlight, my arms weary, I had doubts. It was beginning to feel like we were searching for a needle in a haystack.

Just then the radio crackled, “We’ve got one!” Edwards said.

“Write down your GPS location, the time, and then carefully extricate the bird from the net. We’ll meet you at the Curlew,” Kissling called back to the boat that had captured what would come to be called “KIMU no. 1”.

We zoomed back to the Curlew, still sweeping the water with our search lights, as much for visibility as to continue our search for murrelets. Then FLASH – “There are two,” said Eggleston our netter. As if we’d been doing this for weeks, we followed the capture protocol and in a few short minutes, we too, had a KIMU onboard awaiting processing. We couldn’t help but feel a blush of excitement and success, we’d just doubled last year’s capture total.

Kissling and Lewis have been handling a diversity of birds for several years for various research projects. Their calm confidence and skill were evident. Lewis held the diminutive birds carefully in his sizable hands while Kissling meticulously began taking measurements. They noted details of the birds’ physical appearance (weight, bill length, wing length, coloration, signs of breeding such as a developed brood patch, etc.) They collected a blood sample and breast feathers for genetic information. They placed a USFWS band around one of the birds’ legs and attached a radio transmitter to the KIMU’s back. Once all the data was collected, the birds were carefully returned to the water. They generally flew away moments after moving beyond the shadow of the Curlew. 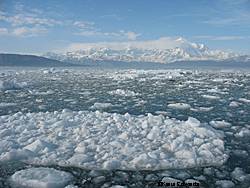 After a few days, Icy Bay became a maze of icebergs, large and small. As much as the ice limited our night time maneuvers, it seemed to drive the Kittlitz’s murrelets out of the bay as well. Our first night of adrenaline-filled success was followed by two Curlew-bound nights. We still had 13 transmitters that needed to be fitted to birds.

Since it was too dangerous to make our way through the ice in the dark, we tried daytime captures. Minus the spotlight, the same techniques were used, this time with laughable results. The birds seemed to love to watch us run through our paces. “Spot the bird, zoom up on the bird, capture the….” another one gets away, either by diving and popping up just out of reach, or simply by taking flight.

As murrelet capture success was evading us, one day we took the Zodiacs to Gull Island, a small island within Icy Bay, just off the eastern shore. As we trekked around the rocky beach the gulls cried out, and black oystercatchers raced on red legs up and down the tide line.

Lewis was the first to find a gull nest. Small bowls had been whittled into the pebbles and sea grass, many cradling one, two and sometimes three grayish, brown speckled eggs. Gulls are colony nesters, so once our eyes became accustomed to what we were looking for, we couldn’t miss the hundreds of nest sites surrounding the island.

Finally the ice stopped flowing out of Taan fiord and the ice that had jammed the bay made its way out to sea; Icy Bay spills into the Gulf of Alaska. With the bay clear we were free to continue our night escapades. Over the next several nights we captured enough birds between 10 p.m. and 3 a.m. to attach all the working transmitters to murrelets and release them to the waters of Icy Bay.

After seven nights of our routine, we left Icy Bay at 4 a.m., the sun rising over Mt. St. Elias. All six of us found a seat at the back of the boat to watch the beauty of the seascape pass as we headed back to Yakutat.

The next day, Kissling, Reid and I flew the second of many aerial telemetry flights in search of signals from the transmitters we placed on the murrelets. It was another gorgeous day, not a cloud in the sky. As we approached Icy Bay, Reid tuned in the transmitter frequencies. When he caught a faint signal we’d spiral around in search of a stronger, louder beeping. Once he keyed in on a signal, Kissling took a GPS point, scribbled a few notes, and we’d move to the next frequency. We crisscrossed the bay several times in search of all 14 birds. We successfully located all but two of the murrelets.

It was exciting to know that the birds that we’d scooped off the surface of the water, carefully handled, equipped with transmitters and then released were still roaming around Icy Bay. During that first flight we didn’t notice any specific relocation of birds from the bay to the upland terrestrial areas where they would nest, but it was still early in the season. Over the next few months, Kissling and others will continue to search for the nests of the elusive Kitzlitz’s murrelet.