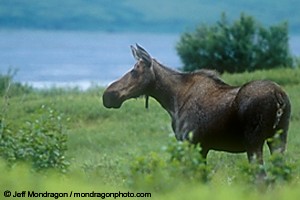 Moose getting into garbage isn't anything new, Seaton said. Like most animals in Alaska, moose are constantly searching for food, especially when it gets to be late in the winter and their fat reserves are running on empty.

"Moose eating garbage does seem kind of odd but there's lots of stuff in our garbage that might be really interesting to a moose--rotten lettuce, tomatoes, grain products like bread," Seaton said.

The number of garbage-picking moose in Fairbanks is relatively minor compared to Alaska's biggest city, Anchorage, where there is a higher density of urban moose than Fairbanks.

Moose started getting into garbage about a decade ago and the problem has intensified in the last few years, said Anchorage area biologist Rick Sinnott with Fish and Game.

"It used to be just a couple of neighborhoods; now it's four or five neighborhoods," said Sinnott. "On garbage pick-up days, moose will just go down the street picking bags off.

"They don't get every one, like a bear," he said, "They just pick ones that smell especially good, maybe the ones with vegetables in them. Sometimes they'll pick up a bag and carry it off."

Dumpster diving also appears to be something that is handed down from generation to generation.

"Cows are teaching their calves to do it and the calves continue doing it as adults," Sinnott said. "Some of them have figured out how to open the lids on plastic Dumpsters by lifting the lid up with their nose."

Eating garbage can pose a health hazard for moose, said Sinnott. Not only are they eating food that is foreign to their digestive systems, but if a moose swallows a garbage bag, it could cause a blockage in the moose's digestive system or get wrapped around the animal's stomach or intestine, which could prove fatal, said Sinnott.

Moose typically get a little ornery at this time of year because both their fat reserves and food supplies are running low, said biologists.

"Right now they're losing weight fairly fast," said Seaton. "They're doing the best they can to get any forage they can. If they smell something like garbage that might help them out, it's worth their time to check it out."

There are some simple rules to follow when dealing with urban moose, Seaton said.

First, never feed a moose. Not only is it illegal, it is dangerous because it conditions moose to relate food to humans, he said.

"It may not cause you problems but it will probably cause the next guy problems," Seaton said. If you have a moose hanging around your house, figure out what's attracting it and get rid of whatever that is, whether it's garbage, hay or the tops of trees you cut down and pile up in the fall.

Never approach a moose, no matter how friendly or relaxed it might appear, Seaton said. Give moose a wide berth and avoid them if possible by changing your route or retreating. Always try to keep something between you and a moose, whether it's a tree, house or vehicle, said Seaton.

If there is a moose outside your front or back door, wait for it to leave. If that doesn't work, try banging on the door, yelling or throwing something at it to scare it off. Remember, too, that moose can be like bears when it comes to protecting their food, said Sinnott.

"They'll defend a Dumpster," he said. "They'll come after you big time." While moose may have developed a fondness for Dumpster diving, state wildlife biologist Don Young doubts they will ever become as proficient at it as some Fairbanksans.

"I don't think moose have those nice poles that people use," he said.