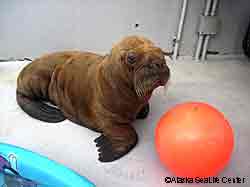 Every spring the Alaska Department of Fish and Game is confronted with calls about “orphaned” baby animals. In many cases the animals are not abandoned or orphaned at all, and in most cases, even if the animal is orphaned, there is nothing the Division of Wildlife Conservation can do. In rare cases state or federal agencies may take action – such as with the Kivalina walrus.

Late last June, the Alaska State Troopers in Kotzebue received a call from the village of Kivalina that a walrus pup was on the beach near the village. Kivalina is north of Kotzebue Sound, halfway between Kotzebue and Point Hope. The villagers reported that the pup had first been seen on the beach a week earlier, with no mother in sight. They guided the pup back to the ocean and it had returned. Villagers said the pup appeared to have lost weight since the first sighting.

The Alaska SeaLife center was contacted, and advised bringing the pup to the SeaLife Center in Seward. The U.S. Fish and Wildlife Service was also contacted, as they have jurisdiction over marine mammals, and they concurred. The Kotzebue troopers called Bering Air and the company volunteered to fly the pup from Kivalina to Kotzebue at no charge. It was then transferred to Alaska Airlines, where it caught the evening flight to Anchorage. SeaLife Center personnel brought the pup to Seward.

The animal, a female weighing about 90 pounds, spent about a week in Seward before it was moved to a home at SeaWorld, in San Diego. Tim Leibling, of the Alaska SeaLife Center, said nine months after the move, the young walrus is doing well at SeaWorld.

Leibling said this was an exceptional case, as they were fortunate to find a home for the animal. Generally, it is very difficult to place animals in zoos or other facilities. The SeaLife Center recommends that people do not make contact or interact with wild marine mammals.

“As a rule, mothers will go off and forage for up to a number of days – depending on the species – and an ‘abandoned’ animal may not be, and interaction can be detrimental,” Leibling said. “You could be causing the abandonment by being nearby.”

“We’re heading into the ‘orphan season,’” said wildlife biologist Karen Blejwas, who serves as Fish and Game’s point person for these issues. Spring is the time of year when the department gets the most calls regarding supposedly abandoned or orphaned animals. As biologists have learned, usually these animals aren’t orphaned at all. Often, overeager individuals “rescue” the animal while the mother is foraging. 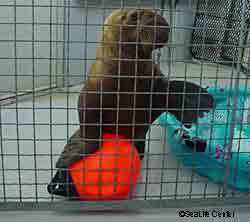 Sometimes, however, the animal has been deliberately abandoned. “Animals are abandoned every year, it’s part of life,” she said. “Often there are reasons – they are injured or diseased, and they aren’t going to make it.”

“Most animals are not going to find a home in a zoo,” she said.

Wildlife biologist Lauri Jemison works with marine mammals as a researcher for the department. It’s just not good practice to remove seal or sea lion pups from the beach, she said. If removed, they have no chance to re-unite with their mothers. Steller sea lion pups are left for several days at a time when their moms go out feeding. They may cry for their moms and appear to be abandoned, but this is part of the mom's pattern of going out to sea to feed, then returning to the rookery to nurse her pup.

Jemison said last summer she and other researchers saw two sea lion pups that were washed away, or swam away, from a sea lion rookery, and really appeared to have been abandoned. However, they later saw females reunited with both the pups and saw the females nursing the pups in their new location away from the rookery.

Discovering an “orphaned” animal is an emotional situation, and it is understandable that people want to help. But the best policy is to leave the animal alone.

Riley Woodford is a writer with the Division of Wildlife Conservation. The Alaska State Troopers contributed to this story, and a brief version appeared in the Fall 2005 DPS Quarterly.