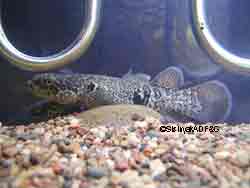 The Alaska blackfish looks like an overweight bulldog with fins. A severe underbite imparts a serious frown on this reclusive throwback to the dark ages. It would not be difficult to picture the little blackfish as a prime player in the evolutionary segment of Disney’s Fantasia, attempting to drag itself out of the primordial soup, but not quite succeeding.

If the blackfish at one time really did attempt to exit the confines of the murky depths of our lakes, it did not fail its task completely. The bottom-dwelling Alaska blackfish is one of the few species of fish in the world that are able to breathe air using a modified esophagus. This trait comes in handy for the blackfish that inhabit tundra pools and seasonal ponds which, during times of low precipitation, can morph into muck puddles. As long as the blackfish can wriggle down into that anoxic, smelly sludge and keep its skin from drying out, it can gulp air until the next rain fills its pond and oxygenates its water.

Along with the ability to “breathe” atmospheric oxygen, the blackfish can also survive in waters with very low dissolved oxygen levels. This helps the blackfish survive winters under the ice in Interior, Northern & Western Alaska’s lakes, ponds and sloughs. As winter drones on, the dissolved oxygen levels under the ice diminishes. Most fish at this time become inactive, conserving energy and reducing their metabolic rate. This time of winter, just before ice-out, is critical in a fish’s life. They are just trying to survive until the ice cap pulls away from the lake shore and allows oxygen to once again diffuse into their realm, bringing the promise of continued life. The Alaska blackfish, however, can tolerate much lower concentrations of dissolved oxygen than the other fish in the lake.

If the opportunity presents itself, however, the blackfish will head to the surface for a few gulps of atmospheric oxygen. Holes in the ice in the middle of winter are sometimes hard to come by, but this is where an unlikely, nearly symbiotic relationship is formed between the blackfish and the muskrat. It is the fortunate blackfish that lives in a lake with resident muskrats. Muskrats construct “pushups” which are winter stores of food above the ice, but over a hole in the ice. Besides a place to feed, muskrats use these pushups as breathing stations. When dissolved oxygen levels are very low in the lake, the Alaska blackfish gather at these muskrat pushups to gulp air. Blackfish are also credited with helping to keep these breathing holes open by getting together in mass and churning the water beneath the holes. The movement of the water deters ice from forming, and even erodes existing ice, keeping access open to the life-saving air for both blackfish and muskrat. In lakes where no muskrat reside, the blackfish may find areas of thin ice and churn the water beneath in an attempt to open the ice to the air.

This ability, which contributes to the blackfish’s winter survivability, can also lead to its demise. The blackfish is a winter subsistence fish. Though not relied upon as heavily as in days gone by, the Alaska blackfish is still harvested by some village residents and used as food for themselves and their dogs.

Villagers harvest Alaska blackfish by drilling a hole in the ice and setting a cone-shaped trap in the hole. When the blackfish come up for air, they cannot find their way out of the trap. Hundreds of blackfish can be harvested in one good trap set. The blackfish can be kept alive in washtubs or simply frozen courtesy of Mother Nature.

Within the aquaria at the Fairbanks Alaska Department of Fish and Game Information Center live a number of Alaska blackfish. More than one Alaska Native elder visiting the information center has commented that if you thaw a blackfish after it has been frozen it will “come back to life.” One elder collapsed into spasms of giggles as she relayed a story from her youth. Once as a young girl she was feeding the family dogs by tossing them frozen blackfish. A few minutes later, much to her surprise (and repulsion) one of the dogs threw up and a thawed and very much alive blackfish wriggled on the ground.

Debate continues as to whether the Alaska blackfish can survive total freezing or partial freezing, for how long and at what temperatures. Surprisingly, there are very few studies in scientific journals that focus on the blackfish. Little is known about their life history and physiology. Given the abilities of the wood frog and the Arctic ground squirrel to survive at sub-freezing body temperatures, I don’t doubt that the Alaska blackfish has the ability to do so. Maybe some hungry grad student may decide that the case of the frozen blackfish is worthy of further investigation. Until then the debate will continue as to how much of the stories are fact and how much are folk lore.