Moose Research in Alaska
When Plants Fight Back 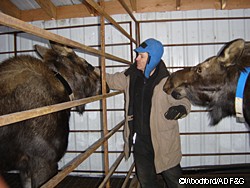 When plants are preyed upon by animals, they can’t bite their attackers or run away. But they can fight back using chemical warfare.

Moose in the Nelchina Basin in Southcentral Alaska were showing signs of nutritional deficiencies, although they were surrounded by willow species that are normally considered high quality forage. When biologists Bill Collins and Don Spalinger looked at the plants the moose were eating, they discovered the willows were producing chemicals that interfered with the animals’ ability to digest leaves and twigs.

“The moose had plenty of felt leaf willow and plenty of diamond willow,” said Collins, a researcher with the Alaska Department of Fish and Game. “Felt leaf willow is normally considered one of the very best browse species, but we found out that in that particular area those two species that are normally so good were so loaded up with tannin that the digestible protein was almost zilch.”

Moose use the nitrogen in plants to build the proteins they need to survive. Tannins bind to the nitrogen and keep it from being digestible, and plants can produce tannins in response to stress – such as herbivory by animals or insects.

“It’s considered to be a mechanism a plant uses to fight against herbivory,” Collins said. Browsing by herbivores, infestation by insects, and high levels of ultra-violet light can all trigger increased tannin production. Collins suspects the plants in the Nelchina Basin are responding to browsing, and not just by moose.

“What I’m thinking might be a major part of it is the caribou in there in the summertime – it’s right in their calving grounds, and they spend a few months of summer going through there really stripping leaves.”

These plants are capable of producing tannins, but since it’s “expensive” for the willows they don’t do it unless it’s needed. So tannin levels vary depending on the pressures on the plant.

“Producing tannin requires a lot of energy for a plant, energy that could otherwise go into growth,” Collins said. “There’s a huge difference between one area and another, with the same exact species.

Collins said studies on the same species of plants in Denali National Park revealed that the nutritional quality was far superior. A look at the forage in the Nelchina Basin revealed another surprise as well.

“The weirdest thing was there was another forage up there that’s normally considered pretty worthless – dwarf birch – and the moose were going out of their way to eat it,” Collins said. “I mean they were digging down through three feet of snow to get into it. This didn’t make much sense. But when we analyzed it we found the amount of digestible protein was much higher than the two normally preferred willow species. That’s because it didn’t have as much tannin. It didn’t have as much nitrogen to begin with, but very little of it was tied up.”

Collins has four tame, yearling moose helping with the research. The moose have been captive since they were just a few weeks old, and are completely habituated to Collins. 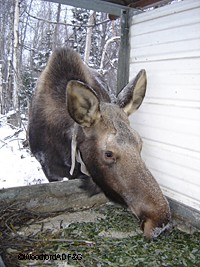 The moose in this project are completely habituated to Collins. Photo by Riley Woodford

Collins gathered 1,200 pounds of moose forage last summer - diamond willow, scouler willow, aspen, birch, and willow twigs - and preserved the material so it would retain its nutritional value. This winter, each moose received a specific feed for a two week period. Over time, each received a total of four different kinds of feed. Collins closely monitored their intake and output.

These materials are difficult to digest – even when they’re not loaded up with tannins – because the cell wall of the plant is tough to break down. As ruminants, moose have adapted to this kind of diet. They also have help. Bacteria and protozoa in the digestive tract of the moose break down the cell walls in the leaves and twigs. These symbiotic organisms can use the cell walls as food. This makes the contents of the plant cells available to the moose for digestion.

All the same organisms may be in the digestive tract regardless of what kind of forage the moose are eating, but they’re in different ratios. Different bacteria break down grass, twigs or leaves, and the ratios of those organisms change depending on the diet. In the wild, as seasons change, the ratios of the symbiotic bacteria gradually change. To avoid problems associated with sudden changes in diet, Collins carefully transitions his moose from one feed to another over a ten-day period, so the micro-organisms have time to adjust to the new diet.

Research on animals’ diets is often based on analysis of feces. That can offer excellent clues, but it can also be misleading. Some herbaceous species and most fungi are so completely digested that even when they comprise as much as 30 percent of a herbivores’ diet, traces may be completely absent or under-represented in feces. That’s true of many of the succulent green plants that moose favor in summer.

“Some plants are digested so quickly they don’t show up in the feces,” he said. “The opposite is also true; plants that are poorly digested will be over represented.”

That’s one advantage of working with tame moose. Collins isn’t simply collecting feces from wild moose in the field and making assumptions about diet, he’s able to compare what goes in with what comes out.

Collins’ moose do spend time in the wild. The moose are led into the field, and he watches them feed. This insures that the research accurately reflects they way moose feed in the wild under normal conditions. When the work is done, the moose return home.