Salmon Forecasting in Alaska: Who Needs to Know? 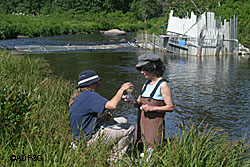 Researchers Cowee Walker and Lisa Tracy collect water samples near the fish weir on the North Fork of the Anchor River. Fish weirs are one important tool managers use to assess salmon stocks.

“How do you know how many salmon there will be?”

Alaska Department of Fish and Game (ADF&G) research analyst Mike Plotnick gets this question a lot, along with “Why can’t you fish and game guys get it right?”

“It helps to explain the life cycle of salmon to some folks,” he said. “Science based fisheries management has largely been a success and it’s something we Alaskans should be proud of especially when you consider the current state of other salmon stocks around the planet.”

Because different species of salmon reach maturity at varying ages, one large successful spawning population may not pay off in a large run for a few years.

Chinook, coho, chum, pink and sockeye salmon all spend various amounts of time in freshwater, and then again varying amounts of time in salt water before returning to spawn. Decades of data can go into the current year’s forecast. A forecast is considered good if it is at least 80 percent accurate.

Fisheries managers set escapement goals to ensure that harvests are sustainable; escapement refers to the fish that are allowed to “escape” the fishery and enter the river to spawn.

“We are interested in managing fisheries to ensure escapement, industry is interested in harvest,” said Doug Eggers, fisheries scientist with ADF&G. Fisheries managers set escapement goals to ensure that harvests are sustainable; escapement refers to the fish that are allowed to “escape” the fishery and enter the river to spawn.

“Run Forecasts and Harvest Projections for 2006 (current year) Alaska Salmon Fisheries and Review of the 2005 (past) Season” is published by ADF&G at the start of every year. The mailing list for this publication includes libraries and research institutions, seafood processors, hatcheries and marketing companies.

“This is published because the industry wants it. They use it in planning for the season and marketing decisions,” Eggers said.

There are two types of forecasts — preseason and inseason. Preseason forecasting helps the industry gear up for fishing and processing. “These forecasts give you an idea of the magnitude of salmon returns we expect to see in the upcoming year,” said Andy McGregor, fisheries scientist for Fish and Game

The Southeast Alaska pink salmon preseason forecast is predicted by exponential smoothing, which is kind of like a running average, and is based on historical harvests. It is one of the least complex forecasting methods, as the salmon eggs deposited in a stream are the same fish that return two years later. Exponential smoothing has been used since 2004 and has been 80 percent to 90 percent accurate.

Forecasting is more complex for Bristol Bay stocks, which spend different lengths of time in freshwater before moving to saltwater.

Half of the world’s sockeye are caught in Bristol Bay — and half of the Bristol Bay catch has historically been caught in the Naknek–Kvichak fishery district. “It’s one of the most important salmon fisheries in the world,” said John H. Clark, ADF&G chief fisheries scientist.

Sockeye salmon. The lower fish is a male in spawning colors.

The data used for sibling forecasting is recorded in brood tables, which are records of escapement counts and information on the corresponding returns from escapements. A look at brood table data going back to the mid 1950s illustrates the difficulty in accurately predicting salmon runs; the ratio between escapement and return data can be wildly variable from year to year.

In addition to sockeye, the Nushagak River has an important Chinook run too. The 2006 Chinook forecast for the Nushagak District is the sum of individual predictions of five age classes and includes adult escapement and return data from brood years 1978 to 2003.

In contrast to preseason forecasting, which is used to predict salmon returns before the fishing season starts, inseason forecasting is done during the fishing season to monitor abundance and actively manage the fisheries throughout Alaska. Inseason forecasting focuses on monitoring catch and escapement — comparing current returns with those from previous years, and is more dependable than preseason forecasts. Fisheries managers collect information inseason, from a variety of sources. These include fish tickets (which document commercial harvest information), the number of boats fishing, catch per unit effort (amount of time it takes a boat to catch a certain amount of fish), escapement surveys, and test fishing.

Test fishing is conducted by ADF&G a few days before the run reaches the fishing grounds. “You go into a specific area at a specific time a few days ahead of when the season opens, to develop a catch per unit effort in the test fishery,” McGregor said. Test fisheries are also done during the fishing season as a monitoring device.

In years of high abundance, when the number of fish returning is much higher than that needed to meet escapement goals, the harvest opportunity is liberalized. Conversely, when returning numbers are low, the harvest is level is tightened so escapement goals can still be met. “The degree of success with abundance-based management depends on the capabilities of your assessment programs in predicting abundance and on your management program in acting on this information,” said Andy McGregor. “Management decisions are made by local biologists that get out in the field and who have emergency order authority to open and close fisheries, not by bureaucrats sitting at desks. The individuals who manage the fisheries are accountable to the users in the communities.” An emergency order stops the fishery.

Pink Salmon. The lower fish is a spawning male, with the humpback that has earned this fish the nickname humpy.

Monitoring escapements is especially critical for effective fisheries management and there are a variety of methods are used. Aerial surveys, conducted by ADF&G biologists from small low-flying aircraft, are used to collect most of the escapement data in Southeast Alaska. Becoming a good aerial surveyor takes a lot of time and training.

“There is a whole learning process that goes into it,” McGregor said. “Consistency and training are most important. Some observers count high or low, but what matters is consistency.” Asked how one can possible estimate the thousands of fish in a stream from a plane, he laughed. “It’s about different shades of black.”

Streams are surveyed several times a week for four to six weeks, depending on the area. Out of 2500 streams in Southeast Alaska, 718 are surveyed aerially for pink salmon. “There’s no way you can count them all,” said Eggers.

Different methods of estimating escapement are used in different areas of Alaska. In Bristol Bay, counting towers, sonar and aerial surveys are used to estimate escapements. Counting towers only work in clearwater systems where you can see fish.

“Sockeye are bank-oriented and tend to swim single file,” McGregor said, which makes them ideal for counting towers. A technician will spend 10 minutes each hour on each side of the stream counting fish. This number is then extrapolated. A team of technicians will monitor the tower in this manner 24 hours a day 7 days a week for the whole season.

In rivers where murky or glacial water make fish difficult to see, sonar is used to count fish using sound waves. In some cases sonar can even differentiate between species by fish size.

The most accurate measure of the number of fish in some systems is done using a weir. Similar to a fence, a fish weir in a stream directs the movement of fish. A trap is the gate to the weir; fish proceed upstream when the trap is opened. Technicians count fish use hand-held counters and click a button each time a fish passes through.

Information on salmon catches and escapements, compiled over time, provides biologists and managers with the data necessary to forecast salmon abundance. Whether used preseason to give industry an idea of what to expect in the upcoming fishing season, or during the season to help biologists manage fisheries, forecasting salmon returns is a very important part of Alaska’s salmon management program.

Amy Carroll is a publication specialist and writer with the Alaska Department of Fish and Game, Division of Commercial Fisheries. She has written about sharks and salmon for Alaska Wildlife News, and hopes to hunt salmon sharks with a wetsuit and spear this summer.